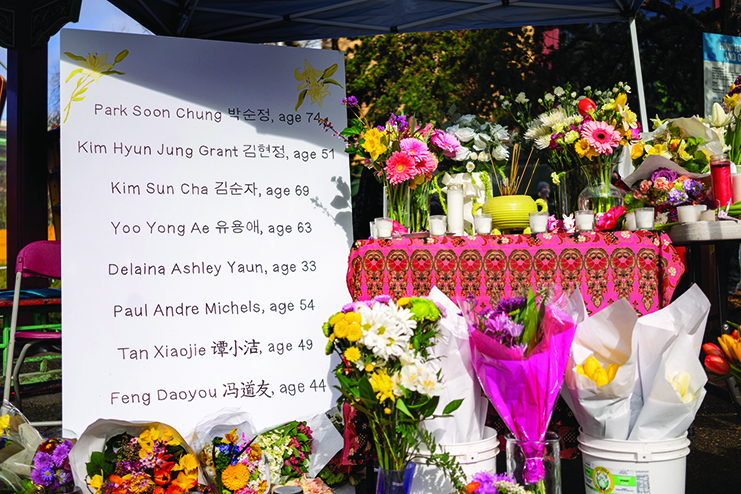 A peak of 200 community members attended a vigil held on March 22 in Hing Hay Park to honor victims of the mid-March massage parlor shootings in Atlanta. Speakers shared sadness at lives cut short, connected the killings to rising anti-Asian hate, and violence against sex workers, and decried the Seattle Police Department’s (SPD) treatment of massage parlors in the Chinatown International District (CID).

“We want to hold space for these victims and for the communities as we come together to share our burden of grief and rage, as well as our power in healing and solidarity,” said Shuxuan Zhou of the Massage Parlor Outreach Project (MPOP), which organized the vigil. “By being here, we are honoring their legacy as community members and healers.”

The vigil included a moment of silence for the victims, whose names were printed on a large sign. The speeches were translated into Mandarin, Korean and Vietnamese.

Eight people were killed in the March 16 shootings at three massage parlors in the Atlanta area. Seven of them were women, and six were Asian women.

To one side of the stage, a folding table overflowed with candles, incense, and bouquets of flowers. People attending continued bringing flowers, and excess bouquets were laid on the ground.

Roxanne White, an enrolled member of the Nez Perce Tribe and activist in the the Missing and Murdered Indigenous Women movement, along with members of Unkitawa, opened the vigil with a land acknowledgement and songs.

White sang a song dedicated to women, remembering those missing, and praying for future generations.

White said she is a survivor of sexual assault and human trafficking, and women she is related to have been murdered or gone missing. “We know the pain of this kind of violence. Our hearts go out to each and every one of you,” she said.

White said systemic oppression, genocide, violence and colonization often push women into sex work. From her experience, sex work was “not what I had planned. That is what happened.”

“This is personal. We deserve protection and justice. This is a battle that none of us should have to fight, but we do,” White said.

Long, the Atlanta shooter, claimed he was motivated by sex addiction and targeted the massage parlots because he considered them a source of temptation. Two of the massage parlors where the gunman shot victims were previously targets of police prostitution investigations, according to the Associated Press.

“I want to make it clear that not all migrant Asian women working at massage parlors do sex work,” said speaker Emi Koyama, a member of the Coalition for Rights & Safety for People in the Sex Trade. “But the way the society vilifies, criminalizes, and targets sex workers for violence, as well as targetting Asians, women, immigrants, poor people, affects all Asian masage workers regardless of whether or not they personally perform any sex work.”

Koyama and others criticized raids on massage parlors in the CID carried out by police in February 2019. Ultimately, said Koyama, the raids deprived the women of their livelihood and displaced them, without changing much.

After the shootings in Atlanta, Mayor Jenny Durkan and interim SPD Chief Adrian Diaz promised to increase police patrols in the CID, and conduct outreach to community-based organizations.

MPOP member Ching-I Chen read from a joint statement by MPOP and the CID Coalition, condemning the patrols.

“Increased police presence does not prevent violence against Asians and Asian Americans,” according to the statement. “On the contrary, policing and surveillance harm the very people the Mayor and SPD now claim concern for.”

The statement connected raids on massage parlors with gentrification in the neighborhood. “[T]alk about ‘public safety’ is coded language for displacing massage parlor workers and our unhoused neighbors to appease white-advantaging gentrification,” the statement read. “Massage parlor workers and workers who provide sex have always been part of the CID, along with migrant laborers, cooks, grocers, and merchants. If we truly want to ‘stop Asian hate’ and keep our community safe, we start by protecting those most vulnerable.”

The statement called for the decriminalization of sex work and defunding of the Seattle Police Department, to fund “housing and social services in the CID.”

Mylinh Bui read from a statement by API Chaya. “We condemn all anti-Asian violence, including targeted attacks on our elders and community members, police violence (including raids of massage parlors), deportations, incarceration, and the public health crisis in prisons exacerbated by COVID 19, and acts of war in our home countries,” the statement reads. “All are rooted in the long history of U.S. imperialism all over the globe.”

Speaker Alison Cheung of the Pacific Rim Solidarity Network (PARISOL) said the vigil was about “protecting the living, and saying without equivocation that this hate has a white supremacist source that won’t end with appeals to love.”