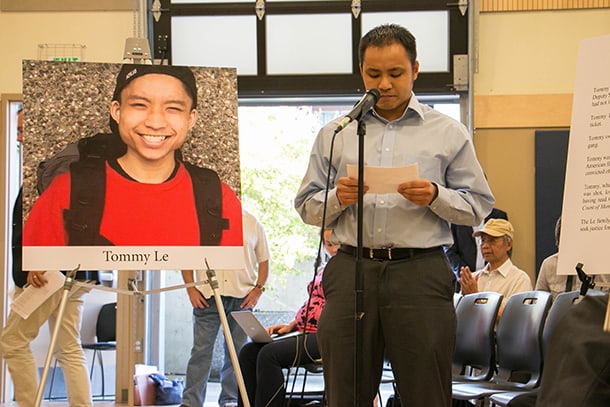 The killing of Tommy Le could have easily gone unnoticed. Neither a star athlete nor a standout student, this son to Vietnamese immigrants and brother to four other siblings was living a rather normal life until he was shot and killed by a King County Sheriff’s Deputy on the night of June 14, 2017. As we now know, Tommy was hours away from his high school graduation and the knife he was reportedly brandishing turned out to be a pen.

What we also know is that a very different and unusual course of action unfolded in the aftermath of Tommy’s death. Seemingly out of nowhere, an event called Justice4Tommy: A Community Led Public Forum appeared on Facebook. Hundreds marked themselves as “Going” or “Interested.” VIPs in attendance included the County Sheriff, a state Representative, a state Senator, a Councilmember and other officials. A deluge of press coverage from local and national media converged on the incident.

While many journalists reported on the murky circumstances around Tommy’s killing, others probed into the activism being carried out by the Vietnamese community. One headline read “For Vietnamese Community, Tommy Le’s Death Could Create a New ‘Paradigm’ of Activism”. Elsewhere, the incident was considered a “catalyst” or “spark” for Vietnamese organizing 2.0.

Indeed, the display of organizing ability from the Vietnamese community was a curious sight given assumptions around its model minority stereotype and general unwillingness to make waves. But instead of being a catalyst or spark, I would argue that the response was an apt – in hindsight, rather expected – result of an important shift that took place months earlier. The activism surrounding Tommy Le was not the first nor will it be the last example of this new reality.

Back in April 2017, a group of protesters showed up at City Hall to demand answers and engagement from the mayor and city officials around a homeless shelter project in Little Saigon. Emblazoned on some of the picket signs was the phrase “Viets Who Give A Shiet.” Also listed as a host on the Justice4Tommy Facebook event page was a group going by this same name. Who are they?

As the group’s founder, I have been privileged to observe the evolution of Vietnamese activism in Seattle months before Tommy was killed. This paradigm shift all but guaranteed that his death would not be overlooked, even if I didn’t know it at the time.

I started Viets Who Give A Shiet (VWGAS) in January 2017 with the intention of getting Vietnamese Americans in Seattle to coordinate among each other in resistance to the new administration. But intention and outcome are frequently, and wonderfully, unpredictable. What became apparent very quickly was that VWGAS met a much different need: a space for Vietnamese Americans to connect with one another and deepen their relationship with the community. “Giving a Shiet” meant that these folks care about the world around them. They care about social justice, racism, intergenerational trauma, environmental issues, education, civic engagement, cultural preservation and much more. VWGAS became a safe space, a home, for them to gather, play, share, learn and organize.

This kind of space has not traditionally existed within the Vietnamese community due to a wide generational gap in political attitudes. Unlike their more conservative elders, younger Vietnamese, having grown up among other minorities and shared their struggles for equality, take on more liberal stances, often in opposition to their parents and grandparents. As a result, most younger Vietnamese have had to suppress their political and social beliefs within the Vietnamese community and instead seek out allies in the Black, White, Latinx, Indigenous, LGBTQ and other Asian American communities.

In VWGAS they found not only safety but also a sense of belonging. Among other Vietnamese who share similar values, they gained additional strength and support through camaraderie, understanding and cultural connection. Empowered in this way, a different kind of activism emerged. Young Vietnamese Americans now had a place to quickly share information and mobilize in response to community needs. The leadership, passion and love for the community that I have witnessed and felt from these folks have been nothing but inspirational.

Most recently, several members concerned with the ICE roundup of Vietnamese refugees collaborated with other community groups to put on an information session and are continuing to work on the issue. Conversations around other topics carry on every day, waiting for the right time to materialize.

I first heard Tommy’s name at a VWGAS gathering taking place just nine days after that fateful night. At some point during the potluck-style event, a member told us the news he had heard coming out of Burien. Most of those present had not heard of Tommy either. I felt the energy shift and become more agitated as we all learned about the incident. Over the next few days, the VWGAS Facebook group buzzed with activity.

A team was formed: one person had ties to the family, another with connections to the sheriff’s office, and others came with resources of their own. A venue was secured, officials and family invited, media informed, food ordered, and, seemingly out of nowhere, an event page called Justice4Tommy: A Community Led Public Forum appeared on Facebook. The response was rapid, surprising, and it was inevitable.