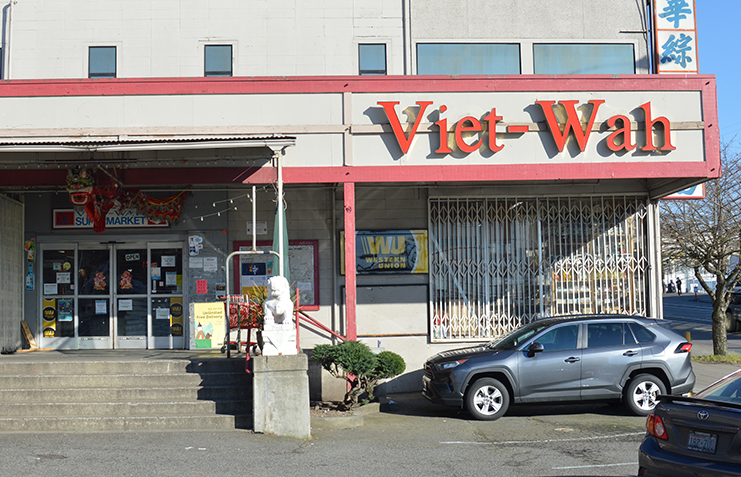 Viet-Wah supermarket and other businesses occupying two thirds of the Asian Plaza Shopping Center at 1032 S. Jackson St. would be demolished to make way for two seven-story apartment buildings with 450 housing units, retail and parking, according to a proposal from developer Mill Creek Residential Trust.

The International Special Review District Board took no action, but considered the historic significance of the site and gave feedback to the architect Tiscareno Associates, during a February 8 video briefing conducted virtually.

The other third of the Asian Plaza shopping Center at 1046 S. Jackson St. (containing Tamarind Tree and other businesses), would not be demolished.

The project would include new retail spaces, according to the developer’s presentation. “Given the location of the site in Little Saigon, it is preferred that this commercial element reinforces the existing, Asian-focused retail, and contributes to its identity as a unique place to live and shop.”

A historical assessment of the site prepared by Studio TJP for Mill Creek Residential found that “the existing building does not seem to be an architecturally significant structure or contribute to the historic character of the Chinatown/International District,” according to the briefing materials provided by the developer. Board members voiced no objections to demolishing the buildings on the site.

Dennis Chinn, owner and leasing agent of the site, said Viet-Wah “has fallen on hard times,” with rampant shoplifting and people camping on the property. “We have already spent tens of thousands of dollars removing homeless encampments on our property,” wrote Chinn in a note to the ISRD Board sent prior to the briefing, laying out his thoughts on the proposed development.

Duc Tran, an entrepreneur and refugee from the Vietnam War, moved his Viet-Wah grocery into the building in 1985. The store opened soon after an influx of Vietnamese refugees in the area, but as the Vietnamese community started moving south to MLK and Rainier, business gravitated there and declined for Viet-Wah, which “cannot survive as it is,” said Chinn.

“The current property values, outrageous real estate taxes, the current crime issues, and the lack of customers,simply will not allow a community-based store like Viet Wah to survive,” Chinn wrote in his note to the ISRD Board.

The area, he said, has become unsafe and in decline. “We want it to become the vibrant community that it used to be.”

Briefing materials from the developer suggested the project would improve public safety in Little Saigon, which has faced high-profile challenges recently: “[B]y adding new residences and street-facing retail to the neighborhood, as well as increased lighting and security per CPTED [Crime Prevention Through Environmental Design] principles, the project will contribute to a safer environment.”

The site contains Nam Phuong Bookstore, which is ready to move out, said Chinn during the briefing. Other tenants include Helping Link, which is looking for a new location. All others apart from Viet Wah are vacant.

Tran is ready to retire and does not want to bring Viet-Wah back if a new building is built, said Chinn. He will close the store before the sale to Mill Creek, but is staying on for now as a favor so the building does not become vacant. The second floor of Viet-Wah is vacant and rodent-infested now, according to Chinn.

ISRD Board member Lizzy Baskerville said it would be helpful to learn the results of further community outreach. Such outreach is not required in the zoning of the site, according to Rebecca Frestedt, ISRD coordinator.

David Della, Principal at Eco-Ready, conducted initial community engagement for the development team, and met with Friends of Little Saigon, the CIDBIA, Viet Wah Group, Helping Link, Summit Sierra School, SCIDpda and InterIm CDA. Overall, he heard no opposition to demolition of the buildings and interest in street level improvements and retail space s. “There’s no objection to demolishing what’s there but looking forward to what’s going to replace that,” he said during the briefing.

In a letter to the ISRD Board, Quynh Pham, executive director of the Friends of Little Saigon (FLS) said she was briefed on the project at the end of 2021 and will seek further input from the FLS Board. “I am encouraged by their effort to revitalize the site with a new mixed-used residential/retail community that is rooted in the Little Saigon neighborhood and to seek our input,” she wrote. She said while more details are needed, FLS “encourages that this project includes considerations for affordability for the residential and commercial components of the development,” and will support the project if it takes into account these considerations.

The site is now in Little Saigon, but the area used to be part of historic Nihonmachi or Japantown, which declined after the WWII incarceration of Japanese Americans, the historic report noted. It was also part of Jazz Alley when Jackson St. night clubs hosted jazz performers, but according to report author Ellen F. C. Mirro, Principal at Studio TJP, it no longer conveys this history.

The building served as a rooming house and later as a furniture and appliance store under the ownership of the Shiomi family. Japanese American architect John Sato, whose building designs exist throughout the Seattle area, designed an addition to the building in 1967. “We believe there are many better examples of Sato’s work,” said Mirro during the briefing.

Baskerville requested that a future briefing include more information about how the project would improve safety, a pedestrian friendly environment, and promote Vietnamese culture and community.

The project would draw inspiration from building entrances elsewhere in the CID, and design features of nearby buildings in Little Saigon, according to a presentation from the design team.

The ISRD Board may take action on issuing or denying a Certificate of Approval for the project at a later meeting. It can only do so after SEPA environmental review is complete.