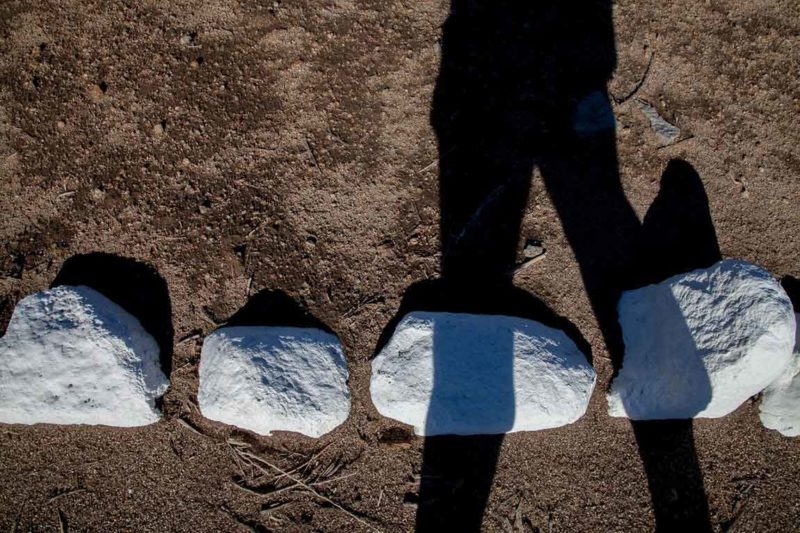 Perhaps a wet Seattle street in winter is not the ideal place to watch a video of a trip to the desert. But here you are, staring at an impossibly bright landscape, spread across four screens in a Pioneer Square storefront. The camera speeds down the road, mountains at the horizon and a fence at the fore, and suddenly a watchtower comes into view. Then a sign, and an entrance: you are at Manzanar.

Funny thing is, now you can’t shake the feeling that you’re just the shadow of someone else’s dream.

In My Shadow Is A Word Writing Itself Across Time, which launched at Seattle’s 4Culture gallery in December and will remain on view for a year, Gazelle Samizay presents images of her visit to the notorious concentration camp in California’s Owens Valley. The Kabul-born artist first learned about Japanese American incarceration in grade school in Pullman, WA. After the last election, she decided to face her worst fear – it could happen to Muslim Americans, too.

So she went to Manzanar, following in the footsteps of other Asian American artists who have reflected on the traces of camp, including Janice Mirikitani, Lawson Inada, Rea Tajiri, Brandon Shimoda, and others. While thousands have attended annual pilgrimages at Manzanar since 1969, Samizay traveled alone.

“I didn’t have a guide,” she told me. But Samizay was not without people. The Afghan American poet Sahar Muradi confirmed her impression that the landscape recalled their ancestral homeland. Even the little white stones – “baby teeth,” Muradi called them – looked like the ones marking landmines left over from the Soviet invasion. Together, the two collaborated via YouTube, Google Docs and text message, sharing research and drafts of Samizay’s video and Muradi’s original poem, which accompanies it.

“I have come / to remember,” Muradi’s voiceover intones. “Something in the shape of Kabul, / this dry earth, / this crown of mountains, / this canopy of blue.” In the video, the landscape is empty, except for Samizay’s shadow and dry crunching footsteps. This Manzanar is “a ghost land,” thronged not only by the spirits of Japanese Americans, but also by the original inhabitants of the land, Paiute and Shoshone.

Yet these could also be ghosts of the studiously forgotten U.S. war in Afghanistan, the video suggests, or of others subjected to indefinite detention at Guantanamo. Or are they immigrants from ICE’s jail just down I-5 in Tacoma? The German Jewish refugee Walter Benjamin, who died fleeing fascism, described the work of the historian as taking “hold of a memory as it flashes up at a moment of danger.” Being Japanese American in 2018 sometimes feels like you’re living in someone else’s memory.

Pioneer Square, where the video screens, is haunted by more than ghosts. Its current Native presence traces back to when the neighborhood was called the Lava Beds, in the early days of Seattle’s growth on Duwamish land. The Native presence persists in the Owens Valley, as well. A recurring phrase in the video – “Coyote’s children living in the water ditch” – invokes one name by which the Paiute refer to themselves.

Water struggles in the Owens Valley are legendary, beginning a century ago when the city of Los Angeles bought up water rights for a new aqueduct. Most of Owens Lake, where 35 Pauites died in an 1863 massacre, was drained to slake the growing metropolis to the south. Manzanar, Diverted, a documentary by the filmmaker Ann Kaneko, draws these threads of Owens Valley history together more explicitly.

Samizay’s video alludes to this history, lamenting “the river dragged south / the valley emptied.” The resulting transformation of the landscape undoubtedly shaped the decision to build Manzanar, as camps were always built in godforsaken terrain. In fact, the initial idea was to house the entire incarcerated population in a single place – an all-Japanese American prison city hidden between the mountains!

For Samizay, it was important not to “equate” Japanese American incarceration to today’s Islamophobia. Instead, she settled on the shadow. As she explained, it evokes the recurrence of the past, like “the nation’s repressed psychological shadow rearing its head” in the election. But it also offers solidarity, across difference, as Muradi’s poem insists: “my shadow upon shadows / painting the earth / writing itself across time.” The great black intellectual W.E.B. Du Bois used a similar image in a 1924 essay, predicting the rise of an Afro-Asian movement against colonialism and white supremacy, which he called “the shadow of shadows.”

In the video, Muradi’s words seek solidarity, but there is no sign of another living person, just rocks, dead trees, dry scrub, and the neat little sets of steps, one-two-three, marking the entrances to now-vanished barracks. Then, in a shock of dazzling colors and patterns, the camera finds origami cranes: first one, then another, then in long strands heaped along weathered wood. Soon after, there are carvings, in Japanese and Roman characters, and a repeated name and date – “Tommy 1943.” The voiceover shifts to the first-person plural: “we have come / to remember.”

“All water has a perfect memory and is forever trying to get back to where it was,” Toni Morrison once wrote. “Writers are like that: remembering where we were, what valley we ran through, what the banks were like, the light that was there and the route back to our original place.” The video concludes with images of water, sparkling with memory.

This is “wuzu,” Samizay explained, “the Afghan pronunciation of an Arabic term denoting the Islamic purification ritual.” In fact, the footage of feet being cleansed before prayer comes from Samizay’s trip to Tunisia before their revolution. She added, “This was a small nod to Muslim culture and also reflected my own prayer that this all ends peacefully.”

Back on the street, the association of memory and prayer reminds you that solidarity in dangerous times demands giving your own stories over to others to be transformed by them, memories of Manzanar finding restoration in a Muslim ritual, like the Japanese American activist Yuri Kochiyama secretly converting to Islam in the 1970s.

The six-minute video is part of an hour-plus program at 4Culture, but anyone interested in a specific work is invited to call ahead. On the day I viewed it, the screening conditions on the street were difficult, but while I strained to make out the words, I was happy to let Pioneer Square provide its own soundtrack. From time to time, the images were interrupted by the faces of passersby, lost in their own thoughts or stopped short by my interest in the screens, their curious faces reflected in the glass, floating above the image like ghosts.