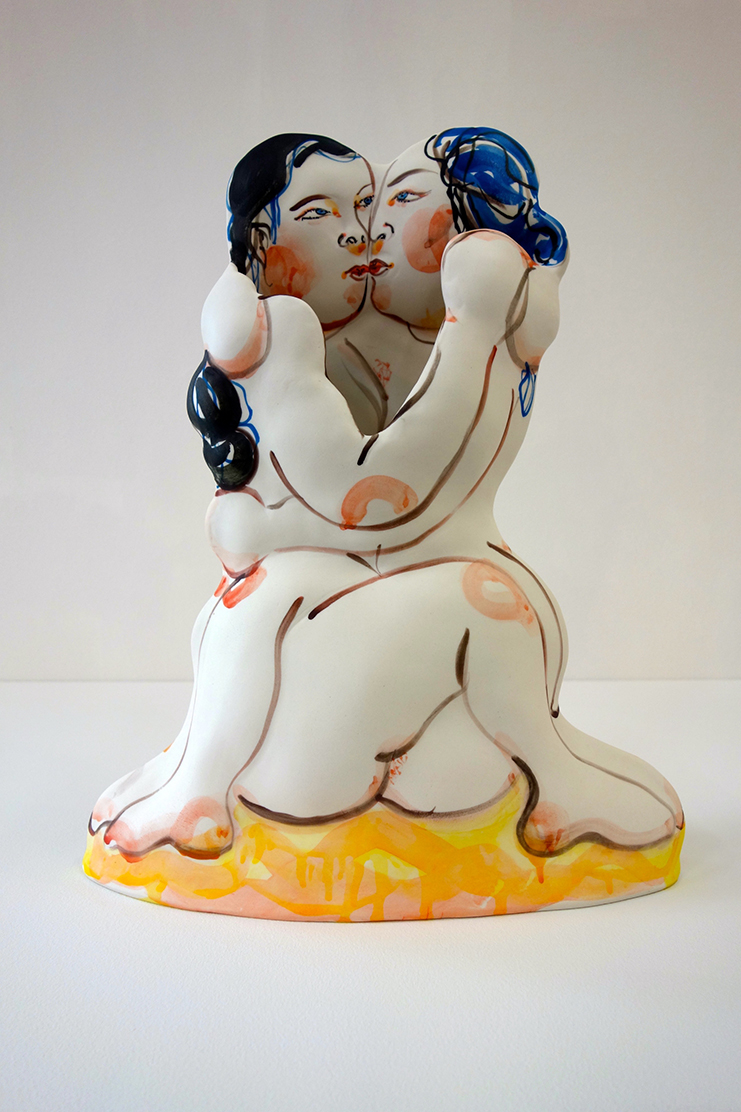 Ceramic artist Akio Takamori passed away in 2017, due to pancreatic cancer, but his art and legacy live on. This month, the Vashon Center for the Arts is hosting a retrospective of his art, with special emphasis on the years 1988-94, during which he created work on Vashon Island.

Fellow artist Patti Warashina highlighted the Vashon Center’s dedicated focus on ceramics. “The show represents one of several exhibitions,” Warashina said, “that the Vashon Center for the Arts will be having for past ceramic artists that lived on Vashon in the past.”

This current show is curated by Vicky Takamori, and it features a number of Akio Takamori’s pieces in the shape of vessels or containers. As Vicky mentions in her Curator Statement, Takamori was interested in the concepts of holding, hiding and protection.

Vicky wants viewers to understand Takamori’s life and inspirations. “Akio grew up in Japan and came to the United States at the age of 23 to study ceramics at the Kansas City Art Institute,” she reported. “He returned to Japan often but his ceramic career and teaching was in the United States.”

Takamori, she said, found muses wherever he went. “He was equally taken by a simple historical utilitarian dish that he would see in a museum,” she remembered, “or the great painting of Las Meninas by Velàzquez at the Prado Museum that Akio used for inspiration for many of this large scale ceramic figures and prints.”

While every visitor finds that different works of art call to them, Warashina says her favorite piece in Takamori’s show is “Lovers Yellow,” created in 2016. “The entry piece as you walk into the gallery is my favorite piece and it is made of porcelain, the only work in the show made of porcelain,” she described.  “I like it as it is an example of his surface painting of the figure and his envelope pots that he was well known for.”

Meanwhile, Vicky Takamori finds it difficult to choose a favorite piece. “The exhibition has work from 1983 to 2016 and when I see each piece it reminds me of that particular time in Akio’s life,” she said. “I feel lucky that I have some of the earliest envelope vessel pieces.”

But when pressed, Vicky feels a certain sentiment for Takamori’s later works. “For the VCA exhibition, I am drawn to Apology made in 2016,” she said. “It was one of the last pieces Akio made before he died for this James Harris Gallery Apology/Remorse exhibition.”

Artlovers can preview some of Takamori’s pieces online at Artsy and the James Harris Gallery, and Warashina believes Takamori leaves a solid legacy. “For me, the importance of Akio Takamori’s work is his facility with his beautiful brushwork on clay,” she said, “and the visual ease with the way he constructs the vessel into figurative subject matter.”

The humanity and playfulness of Takamori’s work hearken to Warashina. “The warmth and sureness of his soft brush strokes on his ceramic works describe his personality, his love of human nature, and his documentation of his past while being raised in Japan,” she said. “The everyday ordinary Japanese neighbor that portrays his subject matter becomes a visual ‘matter of fact’ story of his Japanese youth, but he also reveals, sometimes subtly, in his work, and an unexpected lasciviousness slips, from time to time, into his subject matter.”

Most of all, Warashina emphasized Takamori’s respected national reputation and professionalism.  “His love of clay and his artistry attracted talented students nationally and internationally,” she said. “His devotion and dedication to his art was apparent to his students and that made him a prime model for what it was to be a serious artist.”

Akio Takamori: Time runs through May 29 at Vashon Center for the Arts at 19600 Vashon SW on Vashon Island. Hours are Wednesday – Sunday from noon to 5:00 PM. In addition, “almost life-size” 2-D replicas of sculptural figures that represent village people the artist grew up with in his youth in Japan will be on display outside at Mukai Farm & Garden. For more information, call 206-259-3002 or email [email protected].