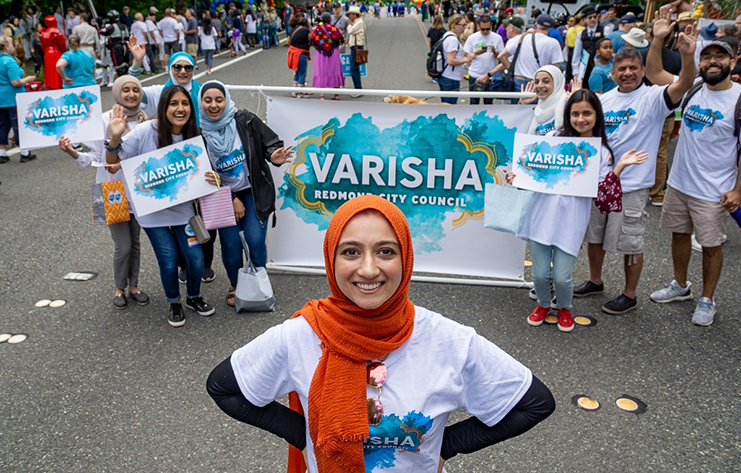 After almost a month of counting and re-counting ballots, Varisha Khan has unseated a three-term Republican incumbent to become the next Position 1 Redmond City Council member. With her election, Khan joins Pasco City Council member-elect Zahra Roach as the first two Muslim women elected to local office in Washington state.

A second-generation Pakistani American, Khan was raised in the greater Redmond area. After graduating high school, she attended the University of Washington and became the founding director of the university’s Middle Eastern Student Commission.

Before becoming a political candidate, Khan worked for various nonprofit organizations throughout King County including OneAmerica Votes where she focused on promoting inclusion and diversity in politics and the media.

“I’m someone that’s very comfortable with who I am,” she said. “Being myself was never a question. By continuing to put my name and face out there, I want to help other South Asians feel comfortable with being themselves too.”

Khan first thought about running for Redmond City Council in February. With four of the council’s seven seats up for election in November, the 24-year old started attending council meetings to observe the interactions being had between council members and learn more about each’s political perspective. After meeting with a few prospective candidates, Khan narrowed in on incumbent Hank Myers and sat down to meet with him to discuss her potential candidacy.

The meeting did not go well. Myers discouraged her from challenging him in the election and told her he was better suited to represent Redmond’s minority population, she said.

According to the U.S Census Bureau, 48% of Redmond’s 67,600-person population is composed of people of color. For Khan, the lack of minority representation at city hall, along with her conversation with Myers, pushed her to officially launch her campaign in May.

“Redmond is a diverse city with a flourishing middle class,” she said. “But half of its residents continue to be left out of political conversations. We need a voice that can advocate for the city’s minority communities and I think I’m the right person to do that.”

Khan’s candidacy was not without controversy. As a woman who wears a hijab, she knew it was likely she would face racist and Islamophobic comments from the start of her campaign. Over the course of eight months, Khan was accused of being anti-Semitic and was asked whether she planned to bring Sharia Law to Redmond. On Twitter, strangers sent messages telling her to “take that towel off your head” and “go back to your country”—that homeland being Dallas.

Khan had a rocky start to the election. Following the release of the first round of votes by King County Elections on November 5, she trailed Myers by 651 votes. Three days and five rounds of election results later, Khan led Myers by 19 votes. For the rest of the month, Khan held on to a narrow lead, patiently waiting to surpass the threshold required for a recount and call the election in her favor.

She did not make it. After the November 26 certification deadline, Khan found herself one vote short of avoiding a machine recount. A week and a half passed before she finally heard the good news on December 6: she would become the newest Redmond City Council member.

As the start of her four-year term nears, Khan is eager to get to work. Among her priorities, she plans to promote sustainability on the council and introduce a Redmond-specific version of the Green New Deal. She wants to increase the density of housing units in Redmond and lower the existing income requirements needed to apply for affordable housing.

One month after the election process began, Khan recognizes the significance of her historic win. She hopes her story inspires other young people of color to run for office and to learn more about the electoral process.

“Our election was truly a civics lesson in why every vote counts,” she said. “And for that, I’m grateful.”