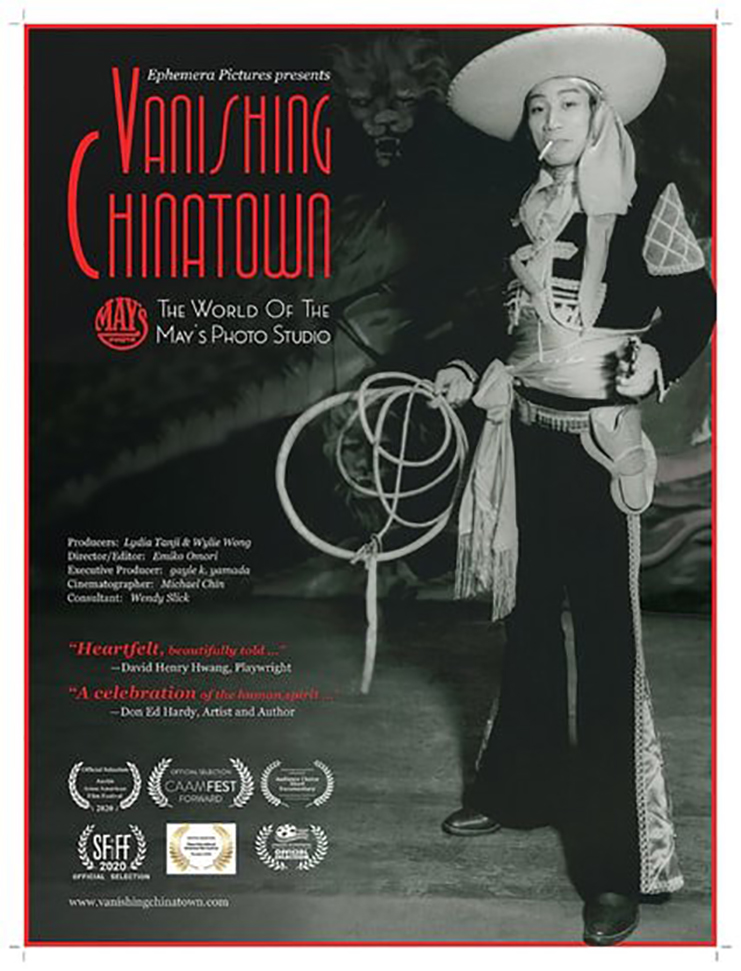 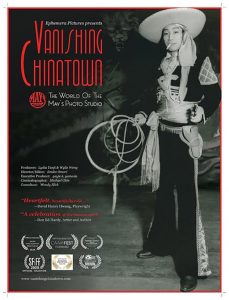 My father was born on Grant Avenue in the heart of San Francisco Chinatown, not far from the May’s Photo Studio, 770 Sacramento Street.

Perusing Him Mark Lai, Autobiography of a Chinese American Historian, I notice that my Uncle Him included several photographs of the Lai family, as well as his parents (my grandparents) as a young couple – 1923, the year that the May Photo Studio opened. This time, I notice the backdrops of the family photos were similar to those in Vanishing Chinatown: backdrops that connect me as a third-generation Paper Granddaughter.

Emiko Omori’s documentary, Vanishing Chinatown: The World of the May’s Photo Studio, is a beautiful montage of Isabella May and Leo Chan Lee’s photography and a narrative history, told by the Lee’s granddaughter, Corinne Chan Takayama and the late historian Judy Yung (1946-2020). Corinne recounts her loving grandparents:  elegant Isabella May and energetic Leo whose fishing expeditions Corinne yearned to join. Indeed, Leo’s photos of the fish were impressive, seemingly two thirds the height of the fisherman!

The recovery of some 700 photographs by then art student, Wylie Wong, is a remarkable reminder of buried community records:  the ephemera of a storefront, a small business and personal papers. Wong describes how he saved the photos and other studio artwork from a dumpster as the studio was being cleaned out. Wong eventually donated his collection of photographs and San Francisco Chinatown ephemera 1920-1999 to Stanford University, Special Collections.

The photos in Vanishing Chinatown that I found most haunting were those that reunited family members who were separated by the Chinese Exclusion laws. An early form of Photoshop would superimpose a family member into a group photo or at least with the overseas parent. While my grandparents didn’t suffer this separation, they certainly tried to stay in contact with family back in Congxia, a hamlet near Luohang, Nanhai County, in southern China. They sent remittances when they could and perhaps a photo as evidence that they were succeeding in their adopted country.

The May Photo Studio produced other types of photos that represented people in imaginative roles, using fanciful backdrops. George Berticevich, a collector of backdrops describes them as dreamlike memories of home. The backdrops reinvented people outside the racist confines of American society.

Vanishing Chinatown portrays a thriving cultural life with dramatic Chinese Opera productions, community banquets and grand aspirations. Leo applied glitter to the Chinese Opera costumes to reflect light as would the actual sequins. The Lee’s were part-owners of a Chinese Opera house, so they photographed scenes for publicity. Other plays were “half western,” with all the parts played by Chinese actors. Perhaps this explains why the portraits included a Chinese man bare-chested, wearing an American Indian headdress with long braids hanging down the side. Some plays were more like newsreels, intended to communicate news of events in China and would include signs affixed to actors that read “Traitor” or “Protestor.”

While many Asian American documentaries chronicle the immigrant journey of settlement and community struggles, Vanishing Chinatown is unique in presenting photos taken by a community-based photographer that show different sectors of the community as they chose to present themselves. If outside the boundaries of Chinatown, Chinese might be stigmatized as “Yellow Peril” (William Randolph Hearst newspapers’ moniker), the May Photos were glamorous, heroic and significant. Community events elevated community life, and the May’s 360 Panoramic camera documented the crowd of attendees.

The May Studio produced Chinese “identification” cards, documents made necessary by Chinese exclusion laws (1882-1965). In the late ‘40s when Senator Joseph McCarthy publicly targeted progressives and communists, the FBI pressured Leo Chan to identify Paper Sons and Daughters who were living under Paper document names. In Vanishing Chinatown, Judy Yung states that Leo didn’t want to cooperate with the FBI; indeed, Leo himself was a Paper Son.  Leo’s granddaughter Corinne reflects that her family chose to retain the actual family name, “Chan,” as a middle name – as did my family retain “Mark.”

To those orphaned from family names and orphaned from a vibrant Chinatown before desegregation and gentrification, Vanishing Chinatown deepens the past of our present. The May Photo Studio immortalized the Chinatown of my 94-year-old father’s youth where Chinese America came into its own.

DVDs of this film available for sale via Center for Asian American Media. Go to: [email protected]. For details on the film, go to vanishingchinatown.com.