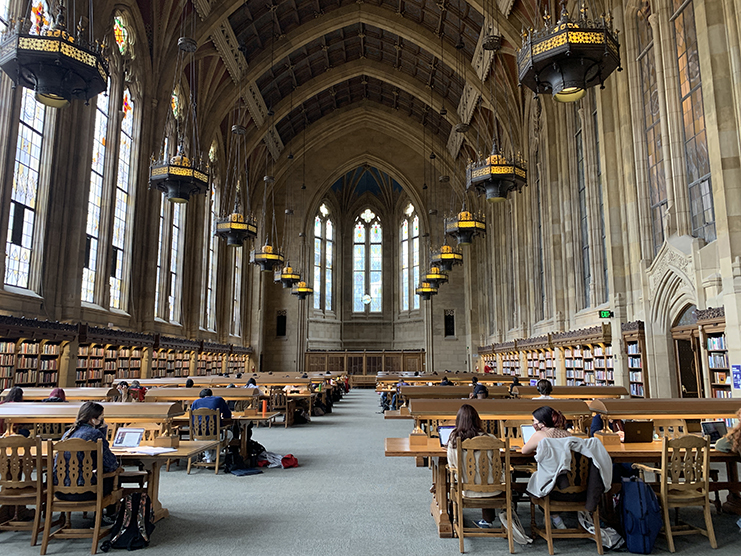 As University of Washington announced a change back to in-person classes, students and staff are expressing hopes for the school to continue offering both in-person and online options for students.

On Jan. 24, the University of Washington announced that the school is returning back to largely in-person classes starting Jan. 31 as COVID rates are improving.

The Omicron wave peaked on Jan. 10, when more than 1.3 million new COVID cases were confirmed within a day, according to the Centers for Disease Control and Prevention. Around the same time last year when COVID peaked in the country, the highest one-day record was only around 300,000 new cases. And that was before vaccinations were distributed to the public. As of Jan. 25, the seven-day moving average cases have come down to 623,000 cases per day.

Courtney Liu, a UW senior majoring in industrial engineering, was disappointed about her classes being online again.

“I am looking forward to seeing people in person, especially because I’m a senior. I feel like I have missed a lot of my college experience due to COVID,” she said.

Liu is also the president of the UW Hong Kong Student Association. In order to ensure members and committees are safe, HKSA moved their general officer meeting online until Jan. 28. Their upcoming plans were affected as well, including their annual Little Hong Kong event.

Little Hong Kong is an event that HKSA holds every year to promote Hong Kong culture. They usually do games and sell food like bubble waffles and dim sum, which is a major part of the event.

“We don’t know whether we are going to have Little Hong Kong because it is a big group event,” Liu said. “It’s really hard to work around it. We are trying to figure out how to have fun, but still keep people safe.”

Most events, including Little Hong Kong, were canceled last year because of the pandemic. It seems that these events are facing a different kind of challenge this year due to the sudden emergence of the Omicron wave.

“Now is the time to figure out how we change stuff, whether it’d be like pre-packaging the food and having people eat outside, or in a designated area. And also crowd control, maybe allowing only a certain number of people in the room at a time. So there’s a lot of different factors we are still working on,” Liu said.

Despite Liu’s responsibility as the president of HKSA, she still hopes that the school will offer in-person options in February.

“It’s kind of frustrating because I have a capstone project that is difficult to do online,” she said. “But at the same time I understand people want to be safe.”

Yujie Zhang, a communication major senior from the University of Washington, said that she preferred hybrid classes in February.

“I hope students get both options of in-person and online classes. So students like me, who are more afraid of COVID, can choose online classes and feel more secure,” she said.

Right before the Omicron wave hit, Zhang went on a trip to Orlando for a couple days. She developed a sore throat during the trip, which was around the time when the Omicron variant started to break out. So she registered for Husky Coronavirus Testing right after she came back to Seattle. She was negative.

Zhang is aware that the pandemic in the U.S. is getting worse recently. As an international student, she wanted to go back to China. Yet since UW is resuming in-person classes in January, the situation does not allow her to do that.

Zhang said she worries that Omicron is more contagious than other variants.

“You don’t know if your classmates got COVID or not. And you get notified only when they have attended classes and tested positive. It’s pretty scary, especially Omicron spread significantly faster than the other variants,” she said. “But I understand that some students might want in-person classes. And the school should also consider their demands.”

Troy Bonnes, an academic adviser of the University of Washington Department of Communication, is also aware of the stress that COVID has brought students.

“Students are dealing with a really stressful time during the pandemic with mental health issues and all sorts of things that are harder than the pre-pandemic,” Bonnes said.

As an adviser, part of his job is to talk to students about their difficulties. But online advising has made it significantly more difficult.

“When we are talking to each other through a screen, the immediate communication is just different than in-person. Even if you are aware of it, trying to compensate for it, you can’t fully [do that],” Bonnes said. “It’s harder to as accurately understand someone’s emotional state when communicating through Zoom. It’s harder to convey empathy through a camera. Now I can’t even give a student a hug.”

Bonnes suggested the school offer instruction or services in a hybrid model, incorporating an in-person version but also an online option.

“There are students that are totally ready for the in-person instruction, and it’s mostly safe for that,” Bonnes said.

“But there is also a large percent of students who are not ready. Students who are parents themselves, trying to navigate child care, or students who are primary caregivers for family members at home. It’s a really scary prospect that the student might bring the virus home to the family,” Bonnes said.

He also mentioned that there are international students who are from countries where the virus is not as rampant as it is in the U.S. They chose to go back to their home country to do as much of their schooling as possible because they feel safer at home.

“It’d be great if every single class and every single student service could be offered with an online version and an in-person version, at least through this wave of the pandemic,” Bonnes said.