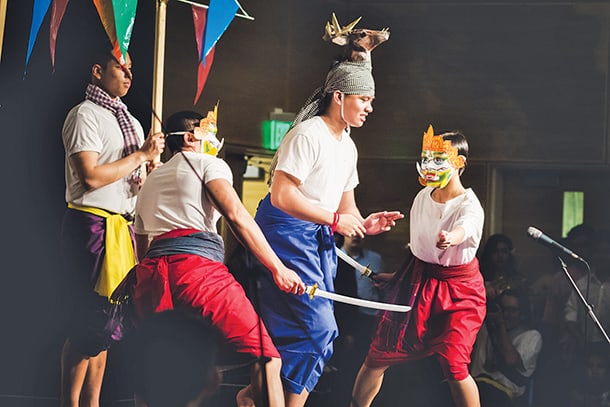 This famous Khmer saying originates from Thoun Chey, a popular Khmer folktale that follows a young village boy’s journey as a servant to the king to establish equality among the rich and the poor through his wit. This folktale was one of the many acts featured in the Khmer Student Association’s (KhSA) annual New Year Show at the University of Washington held on Saturday, May 5.

Running on its 22nd year, the event boasted over 700 guests from all around the Seattle region who came to celebrate a night of Khmer culture through live performances of theatrical storytelling, traditional dances, and cuisine. Students dressed in bright kbens and kramas, adorned with golden headdresses and ornaments. They performed acts such as hte ceremonial blessing ritual to the rice harvest dance, emphasizing the significance of farming to the Khmer people, and Robam Trot, the donation dance meant to remove the bad karma from the old year for a fresh start in the new. In between, student actors narrated the life of Thoun Chey using a combination of Khmer and English, allowing both younger and older folks – Khmer and non-Khmer – to appreciate the show, and evoking laughter from the crowd.

In addition to the performances, the recognition of the KhSA scholarship recipients highlighted the association’s other goals of addressing the high level of financial need, barriers to higher education and the significant educational achievement gap among Khmer Americans. This year, three $1,000 scholarships were awarded to high school seniors from Mt. Tahoma, Cascade and Evergreen High School.

KhSA’s New Year Show and the organization itself was not just meant to share and celebrate Khmer culture, but to also empower, unite and inspire the Khmer community. The New Year Show is more than simply an annual celebration of a Khmer holiday, and this complexity can be seen through the dedication of the passionate KhSA officers and members.

“The Khmer New Year Show means we are able to close the gap between our generations and communities because we are able to come together,” says Melissa Ouk, KhSA cultural chair. She believes that activities such as this that give a platform for underrepresented students to use their voices not only helps with transparency, but solidarity.

“The thing with our community and connections is that it’s very lost – we’re always so separated…and it’s hard for us Cambodians even in America. We have to help each other. We all have that same goal and vision, and the more people we have, the stronger we’ll be.”

Davies Chan, KhSA Activities Coordinator, has similar thoughts. In addition to solidarity, he sees the value in expression. “The trauma of the past tells us we can’t be Khmer, that we have to be secretive or ashamed of it. With this type of exposure, it really opens [our] chance for expression.”

Chan states it’s about holding pride for Khmer identity, staying true to one’s roots and values, and ultimately not being afraid to be vulnerable to the dark history surrounding the culture.

Culture and identity are central to the struggle of Khmer youth today, and it explains the unrelenting drive of these individuals to emphasize its significance in their lives. “The show is important because of preservation. The community will only get smaller without preservation of what [culture] we have. One day it’s going to go away,” says Sopheak Neak, KhSA Vice-President. Acknowledging these facts made this event worth all the stress, the hours upon hours of exhaustive work and investment of energy for the officers.

It was fitting for this year’s play to be on Thoun Chey, in a representation of not just culture, but also advocacy. His saying about the fish explains the necessary coexistence between a country and its people, represented by the fish and scales respectively, who, in order to survive, need gills or a system that promotes equality and equity for all. In a fish head soup where the head signifies the individuals of power and influence, there must also be machoo sundahn or the educated who, as dreamers, artists, and scholars, will enhance the country’s wellbeing as he helped to do.

Such a tale models traits of grit and intelligence, but also serves as a reminder of how the Khmer community, as with the individuals of KhSA, continues to seek pathways of empowerment to uplift the youth of today, fight against oppression as well as the trauma of genocide, revive a fading culture, and ultimately be earth-shakers like Thoun Chey.