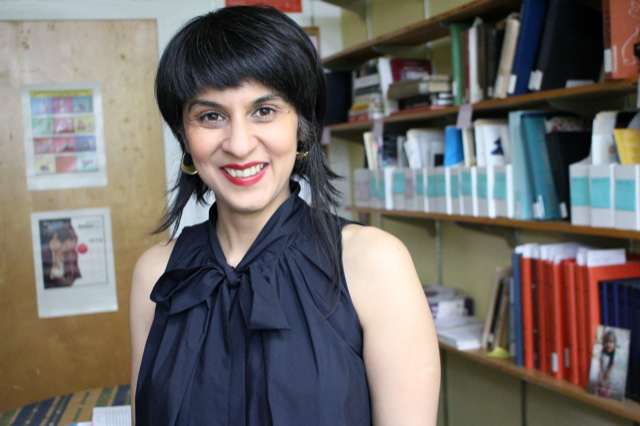 Sonal Khullar, a University of Washington art history professor, is an Indian citizen but a long-term resident, student and professor in the United States. Khullar’s current book project, The Art of Dislocation: Conflict and Collaboration in Contemporary Art from South Asia, studies “how collaboration has emerged as a hallmark of contemporary art in South Asia and a critical response to globalization since the 1990s.” She will be giving a class on contemporary art from South Asia at the Frye Art Museum July 23-26.

Khullar told the Examiner that in South Asia, there are huge caste, religious, linguistic and national barriers to artists coming together to exchange ideas. For example, on the international level, between India and Pakistan there has always existed open hostility and at times war. Pakistan and Bangladesh likewise have had high political tensions. Within India as well, there are tensions between Muslims and Hindus, caste barriers that limit contact and access for many to elitist art circles and also major linguistic divides between regions.

Artists from different parts of South Asia live in similar contexts and have stories and art to share related to the experience and challenges of urban life, air pollution and the challenges of ethnic-nationalism and extreme class and caste barriers. Part of Khullar’s research focuses on how these artists find neutral spaces away from the barriers and conflicts of South Asia to share work and ideas. “Many go to Singapore and Dubai and other places to gather,” Khullar said.

As part of Khullar’s recent research trip, Khullar went back to Pakistan and visited her family’s old property in Lahore. Although Khullar is Indian, didn’t grow up in Lahore, and knows of the violent and difficult history with Pakistan, Khullar said she felt “nostalgia about Lahore. I felt like I knew people there, it felt like a really familiar place,” she said about it when she visited. She emphasized that the two countries share history, languages and culture and that people in Pakistan frequently mistook her as Pakistani and were sometimes surprised to learn that she was indeed Indian. Given the fact she is an Indian citizen, however, this meant increased scrutiny by the Pakistani government of her trip.

Even though Khullar’s parents are both Indian, they come from different parts of the country and thus speak different native languages. Her mother is from Bangalore where Kannada is the mother tongue and her father is from the Punjab where Punjabi is spoken. As such, Khullar’s parents raised their children using Hindi, the most common Indian language and a third language that was neither of their mother tongues. While Khullar grew up speaking Hindi at home and did most of her studies in English, she is able to understand and converse to varying degrees in Punjabi and Urdu as well. Given her background, she is both well-suited to do research throughout South Asia and representative of the complex connections and divisions within the region.

In addition to studying the art history of South Asia, part of Khullar’s research and analysis focuses on critiquing the art gallery culture. Khullar said that much of the art she has studied should be displayed in more than simply a gallery setting. In fact, Khullar pointed out that many pieces that she has studied in fact criticize gallery-based art. She discussed different mediums for displaying different types of art such as circulating booklets and different types of performance installations. Khullar said that she is not opposed to galleries and isn’t making moral judgments about them. Rather, she emphasized that the choices for displaying many forms of art she has studied in South Asia should not be a choice of either-or. Rather, there should be multiple different ways to display different types of art that move beyond just the gallery.

Examples of specific art that Khullar has studied recently in South Asia include visual and performance art related to a water harvesting project, farmer suicides in India’s “Cotton Belt” due to excessive debt, seed festivals and other examples of communities of artists that are mobilizing to change their local, national and international conditions.