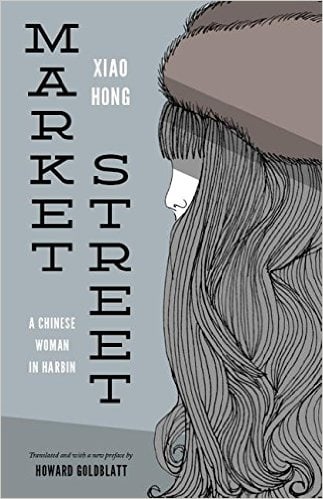 Market Street: A Chinese Woman in Harbin will likely appeal to a narrow audience of readers—namely Chinese literature aficionados who are already familiar with Xiao Hong’s work as a novelist, or those with specific interests in literary translation. Published after her first book, The Field of Life and Death, the thinly disguised fictional work, documents the two impoverished years from 1932 to 1934 that Xiao Hong spent living in the Russian-influenced city of Harbin, following the Japanese invasion of Manchuria.

As ethnic minorities in Japanese-occupied Harbin, writers Qiao Yin and Langhua struggle to survive. The book opens with a violent altercation between Langhua and the couple’s Russian landlord, who reports the pair to the police after an unsuccessful attempt to collect overdue rent. An uneasy tension underlies much of the book—Qiao Ying and Langhua live in a constant state of fear heightened by the insecurity and hostility brought on by the occupation.

In order to earn a meager income, Langhua accepts occasional work as a tutor, faking expertise in medicine, martial arts, and philosophy. But confronted with poverty, the pair is forced to beg money and eventually pawn Qiao Yin’s coat to pay for food. Langhua is depicted as stingy, proud, and unstable, in contrast to Qiao Yin’s more resourceful character. She borrows money from a former teacher, takes on her own students, and finds the couple temporary work painting ads for a movie house.

The instability of the couple’s economic condition brings out the worst in their relationship—with Langhua largely coming across as a selfish, pompous ass. In a seemingly carefree scene, after the couple publish a book together, the lovers celebrate by going boating on the river. When Langhua’s shirt floats away, he dives into the river to retrieve it and finds a dead fish. He insists that they bring it home. Before dining on the fish that he tells Qiao Yin to fry up, Langhua declares, “I’m treating you to this fish dinner.”

Socially isolated, the couple joins a band of Chinese artists that meets in secret. The group reads and stages plays, puts on salons, and provides the young writers with a community that supports their creative and political interests. But Qiao Yin and Langhua openly criticize the Japanese in their writing and the publication of their book threatens the safety of their community. The troupe disbands when military police and secret agents round up members of the group—eventually, the couple choose to flee the city.

First published in 1986, the UW edition of Market Street includes a new preface by translator Howard Goldblatt who has translated Xiao Hong’s entire corpus. Written before Xiao Hong’s rise to literary fame for her masterpiece Tales of Hulan River, Market Street is completely unlike her autobiographical novel of rural village life. Episodic and discontinuous in its narrative, with few clues to the characters’ pasts, Market Street may disappoint the audience expectations of those readers only acquainted with the author’s fictional work. Yet, the impressionistic style and psychological explorations of gender roles in Market Street, combined with the ability to impart the cultural and socio-political tensions preceding the second Sino-Japanese War, make it a worthwhile read.