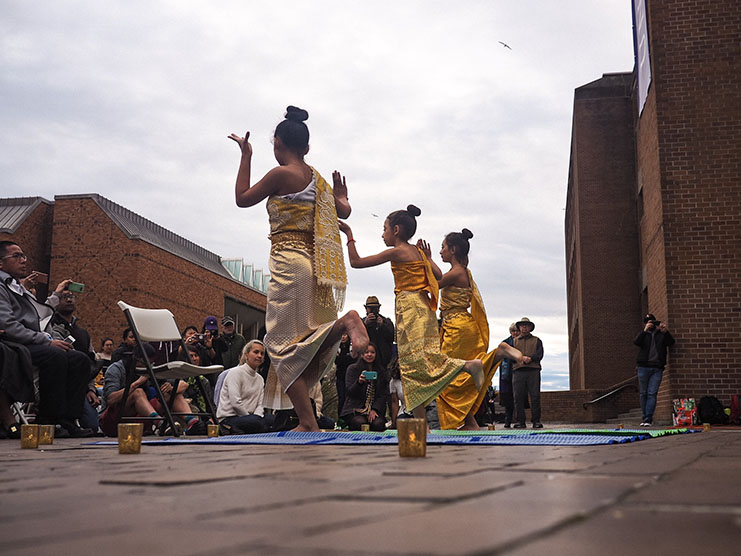 “Tonight is a night for the Khmer community,” said Ammara Touch, president of the Khmer Student Association (KhSA) of the University of Washington during opening remarks to 44 Years of Khmer Resilience, an event the student organization led on April 17, 2019, at Red Square on the UW campus.

“That’s why we’re gathered here—to know and remember, because there is power in knowledge, in knowing yourself, knowing history; there is power in memory, in visibility, in collective healing. And more importantly, we’re celebrating our resilience. We’re here, making space for us Khmer Americans to express our fortitude and show what we are made of.”

Over 100 people gathered in front of a lineup of speakers, poets and musicians, all of which displayed art and work inspired by stories of their roots and a celebration of how far the community has come.

“Last year there was The Art of Survival and this year we wanted to do something somewhere in that aspect, but with our students and our community,” said Melissa Ouk, KhSA cultural chair.

The Art of Survival was an art event held by the Cambodian American Community Council of Washington (CACCWA) at Seattle City Hall in 2018 to remember those that perished during the Cambodian Genocide and acknowledge those that survived.

Because the event wasn’t being organized for 2019, Touch and KhSA saw the need to lead the Khmer American community and organize in its absence. “This student-led event is entirely community driven. Logistical support was provided by the UW Southeast Asia Center in securing the venue (Red Square) and UW faculty who are closely affiliated with KhSA. Many active Khmer community leaders and activists have offered their assistance in any way possible, whether it be in the form of promotion, performance or providing equipment,” said Touch.

Two days prior to the event, on April 15, KhSA and Khmer American community members were bestowed with a proclamation recognizing April 17 as Khmer Holocaust Remembrance Day by the City of Seattle. The proclamation was sponsored by Councilmember Lorena González.

“This proclamation matters because it’s official recognition by the city,” said Ryan Seng, KhSA secretary, about the proclamation’s significance to the community. “And it helps raise awareness so that people can begin to understand the struggles that we, the Cambodian community has been through because the genocide has taken away a lot from us. We’ve lost family, we’ve lost a lot of our culture.”

Vy Nguyen expressed that she sees how the process of organizing toward a proclamation can create future leaders. “It’s about training the newer and younger leaders, for them to step into the space so that they are ready to lead…having that multiple or dual generation framework… as our elders move on and have a quieter life… [so] that we have a bench of leaders who can carry on the memory of what happened and just so that we never forget.”

Traditionally, Khmer Americans spend the month of April celebrating Khmer New Year, as it falls on April 13 to 16. However, amidst the joy and cultural festivities, April also serves as a reminder of one of the worst atrocities of the 20th century. On April 17, 1975, communist Khmer Rouge soldiers rolled triumphantly into Phnom Penh, the capital of Cambodia after a brutal civil war, one of many conflicts that had engulfed Southeast Asia as a result of American occupation and involvement.

“On one hand, Khmer New Year is supposed to be a time of celebration, a time to be with family, to cherish life [blessings] and the rich culture that defines what it means to be Khmer,” said Touch. “Yet this day also is the antithesis of Khmer New Year; this day was the beginning of where the things to celebrate were stolen away and inherently destroyed by the Khmer Rouge. It’s a continuous struggle to navigate this pain, but that is exactly what epitomizes the strength and resilience of the Khmer community, recognizing that despite the atrocities and loss, we are pushing through to recover what we acknowledge is so vital to the continuation/survival of our people,” said Touch.

Singer Davith Phan, aka Davey Tsunami, spoke about his personal journey in traversing hardship in Southeast Seattle as a child of refugees before closing the event on a joyful note with a performance of his single, Madizone 2019, a updated take on a popular dance in Khmer culture. “My daughters were there to witness not just me share stories but everybody before me talk and share our story… which is crazy because it hasn’t even been half a century, like it just happened yesterday and we are thriving as Khmer people,” he said.