$33,648. That’s how much an international student pays for one year of tuition at the University of Washington.

In the face of such a hefty sum, could an additional fee really matter much?

Imposed Autumn 2013 and officially called the International Student Fee, an additional $45 quarterly fee has been a flashpoint because many worry it targets a vulnerable minority population of the student body—newcomers from China, Korea, the Philippines, India, and other Asian countries.

A response to the skyrocketing number of international students on campus, the fee was enacted to fund services and resources needed to help these students reach success, according to university officials and documents. Agenda notes from a UW Board of Regents meeting indicate that the fee helps fund International Student Services, FIUTS (a nonprofit university affiliate), the Career Center, and the Community Standards and Student Conduct department, among other offices at UW.

A majority of the revenue funds full-time staff members to handle the growing number of international students. Before, some students could not schedule adviser or graduation appointments due to understaffing at International Student Services (ISS), which now has two additional employees and extended hours. The new revenue also funds translation services, new programs tailored to fit the needs of international students, and support for faculty trying to bridge cultural differences.

But many on campus say the students already pay enough.

Though initially supportive of the fee two years ago, UW’s student government, ASUW, passed a resolution last March criticizing the fee for exploiting international students to fund services beneficial for all students. Supported by nine Pan-Asian student organizations, the resolution was born out of a campus-wide petition opposing the fee, signed by over 1,200 students.

“On one hand, I felt unfair since I already paid a lot more money than the in-state students,” said Kelly Hou, a third year student from Kunming, China. “On the other hand, I felt I can only accept it since this is not my homeland and so it makes sense if the states want to take advantage of us.”

Other students are concerned about the very name of the fee. By identifying their group, the distinct charge on their tuition statements makes it obvious that only they must pay extra, creating a mentality of segregation.

According to David Parsons, president of the Local UAW 4121 union and a TA in the English Department, the justifications for the fee identified by the university were solely bureaucratic. Parsons believes that this surface-level approach will not adequately help international students assimilate into the university experience, as it deals with staffing and paperwork rather than increasing cultural mixing and meaningful counseling. Programs like the Graduate Opportunities & Minority Achievement Program (GOMAP) that focus on community building are model examples, he suggested.

Opening the university to a foreign population and claiming an international presence should come with more serious stewardship responsibilities, Parsons said. “What seems most disappointing is that the university raised money by going the fees route simply because it was the path of least resistance,” he said.

Parsons has already helped his international-student union members win a fight against the fee. The union, which represents around 4,000 TAs, RAs, research assistants, and paid student tutors on all three UW campuses, raised legal objections to the international-student fee based on an arbitration ruling in 2012. The result of a long quarrel with UW administration, the arbitration specified that the university could not impose any new fee on student employees with tuition waivers, since they work as educators.

For Parsons, however, this victory for working students did not resolve the principle problem with targeting all other foreigners on campus—discrimination. In the newest UAW 4121 Initial Bargaining Demands, the union expresses its commitment to opposing the fee, and demands all students receive equal opportunity for scholarships and financial aid, regardless of immigration status.

“I believe that at a university, everyone should be at the same level when it comes to the student population,” said Viral Shah, a graduate student from India. “So isolating a part of that population and making them pay higher fees to use certain services just goes against the grain of what the university stands for.”

“We don’t ask people who study to pay more for the library,” Shah said, with a chuckle.

As a research assistant in the Atmospheric Sciences department and a member of the UAW 4121, Shah doesn’t have to pay the fee. Regardless, he believes its existence strains efforts to build global relationships. Ideally, he said, the money should come from a central pool funded by the state Legislature.

“The Legislature is turning a blind eye to the benefit of having so many international students come to this state,” Shah said.

Reasons behind the fee

The most criticized justification for the fee is associated with student misconduct. 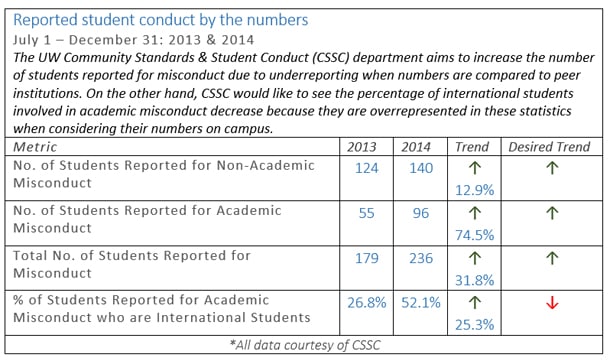 In asking for additional funding, Lewis’s goal was to respond to the increased number of students in a timelier manner. Though reported misconduct has trended upwards for all students from 2013 to 2014, only international students fund additional services in the office. Lewis said she wasn’t part of the decision on the source of funding.

With the additional resources, the office aims to talk to more student groups about underlying causes of misconduct, and to develop workshops and programs to help students make better choices. They partner with FIUTS—the Foundation of International Understanding through Students—to discuss misconduct during the new student orientation.

The new fee replaced a previous one-time orientation fee of $70, said Era Schrepfer, executive director of FIUTS. As a result, the program receives an additional $90,000 a year from UW.

With the additional funding, FIUTS can support an additional staff member and hold more than 100 additional yearly events for international students, ranging from free meet-ups to being placed with local families for Thanksgiving dinner.

“Do I wish there could have been some other pocket of funds available to make these things happen?” asked Schrepfer. “Yes—but I’m not opposed to the way it is funded, because it was really necessary; the funding is doing a lot of good on campus.”

Schrepfer also emphasized that all students pay fees for services they don’t necessarily use, and that the fee is relatively small in the context of what other American universities are charging. A campus-wide fee, where all students divide the costs of international student services, may be a good middle ground, she suggested.