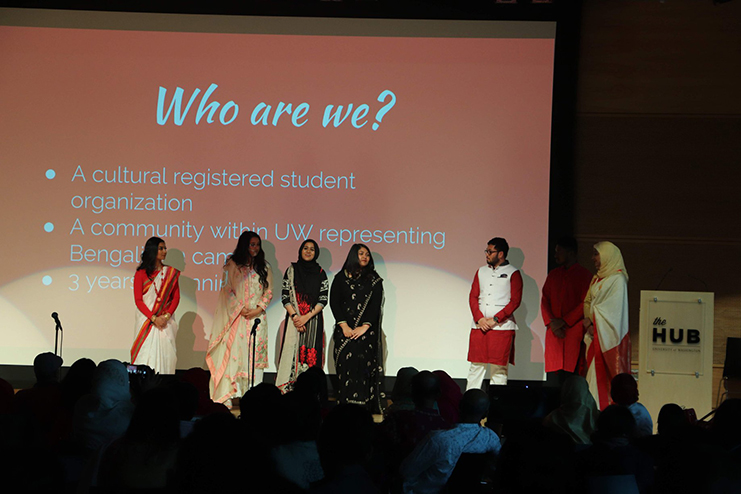 For several years, Bengalis in and around Seattle have celebrated Pohela Boishakh, Bengali New Year, with their friends, families and at smaller community gatherings and at events organized by non-profit organizations such as Projonmo Bangladesh. For the first time this year, the Bengali Student Association (BSA) at the University of Washington brought the regional Bengali community and others together for an official Pohela Boishakh event in April.

Pohela Boishakh is on April 14, the first day of the first month on the Bengali calendar. Pohela Boishakh marks the first day of the year and is celebrated among all Bengali people worldwide. Traditionally on this day, businessowners would refresh their relationships with clients and customers and celebrate by exchanging sweets. UNESCO declared Pohela Boishakh an Intangible Cultural Heritage in 2016, making it more widely recognized, and after it was popularized in Bangladesh, people in West Bengal, India, celebrated with the Mangal Shobhajatra for the first time in 2017. Today, it is celebrated universally by people regardless of their cultures, genders, religions and social demographics.

In Bangladesh, people kick off Pohela Boishakh with a massive parade called Mangal Shobhajatra, meaning “procession of well-being”, with colorful banners, idols and replicas of animals and folklore. The biggest parade in Bangladesh takes place near Dhaka University and is organized by students and teachers in the Faculty of Fine Arts program.

“Pohela Boishakh reminds me of concerts, and lots of colorful people on the streets,” says Durjoy Siddique, a current UW graduate student and attendee at the BSA event.

The UW BSA was found in 2016 and has been active “on and off” since then, according to Samiha Bhuiyan, a UW freshman and board member of BSA who leads public relations for the student organization. “We’ve hosted some major events throughout the school years,” she said.

“We hosted a Bangladeshi game night in fall 2016, International Mother Language Day in winter 2017, Fundraiser for the Rohingya in Fall 2017, Networking Night with BSA in Winter 2019,” – and now Pohela Boishakh this spring.It was the first BSA Pohela Boishakh event we’ve hosted, and we’d like to make it an annual tradition,” said Wasif Sarwar, a BSA consultant who is graduating from UW this year.

Bhuiyan said it was their hope to involve and engage the Bengali community in Seattle at large in the event, beyond the UW student body. “My family has had such great ties with the BSA for many years, so being able to be a part of the board and group meant a lot to me,” she said.

The BSA formed a committee that started planning for this first time Pohela Boishakh event in January of this year, and it was a huge success according to the organizers, with an attendance of around 150 people.

“We had so much support from the communities nearby! From donations to performances, we had so much help from the greater Seattle Bengali community,” says Tasnim Hasan, BSA’s technical coordinator and a sophomore at UW.

Bhuiyan added that with the communities’ support, the organization was able to raise over $400, and the BSA is very grateful for their support and contributions.

Bangladeshis from neighborhoods around Seattle and from surrounding cities came to celebrate. The event was packed with an hour of performances, including the duo vocal group Moyna who performed three songs. Other performances included classical and traditional dances by the dance group TORONGO and the duo dance team of Leona and Samiha, and poem recitations by Marshall Azad and Sanjida Yasmin.

The BSA is actively looking for members and wants to raise awareness of the existence of the organization. Bhuiyan said there are really no requirements to join the BSA. “You don’t even have to go to UW. We welcome everyone. We can expect to see more of these events in the future and this organization only hopes to see growth in the future,” she said.

“We are still planning events and mainly focusing on creating a strong community bond at UW. I hope that in the future we will have a larger organization and have large events like Pohela Boishakh,” said Hasan.

“The students that I talked to all want to make this a part of UW BSA traditions in future years,” said Bhuiyan.