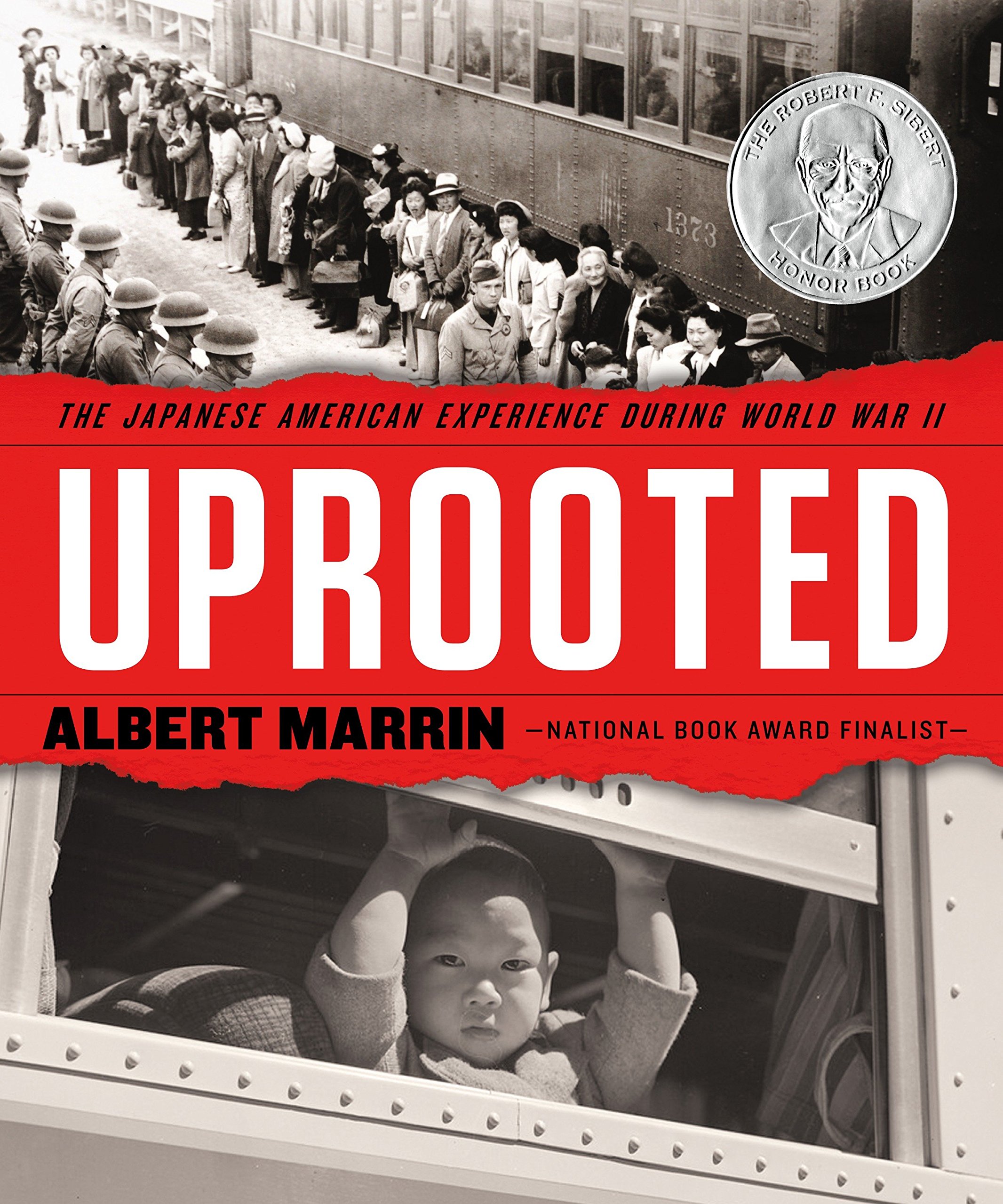 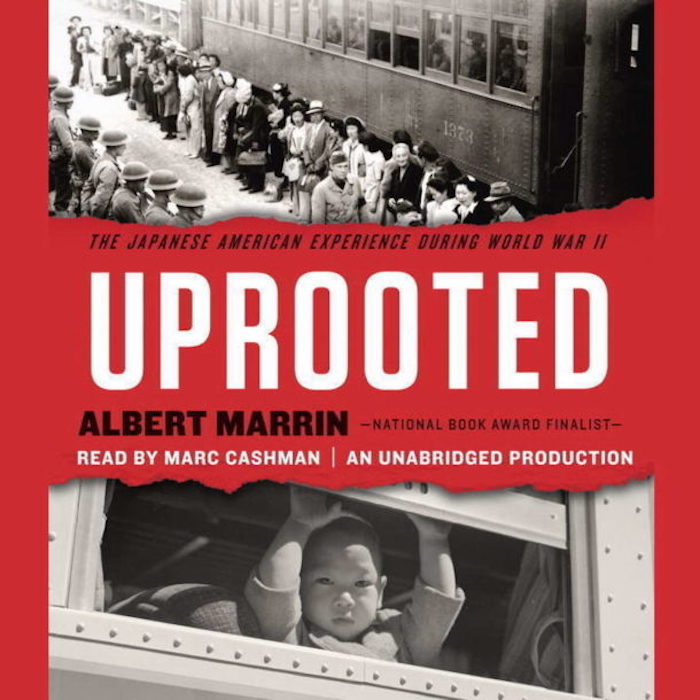 Many Americans of Japanese descent—or those assumed to be—will be asked during their lifetimes: “Why did the Japanese attack Pearl Harbor?”

That the book, Uprooted: The Japanese American Experience During World War II, answers that question separates this work from other books geared for teen readers about the “camps.”

In Uprooted, author Albert Marrin not only thoroughly covers the Japanese American forced confinement ordeal, but also the evolution of racism on both sides—Japan and America—which led to and fueled the war in the Pacific and the treatment of those of Japanese descent in the Western Hemisphere.

Marrin begins with the origin of Japan. For centuries, with the isolated island nation engulfed in clan wars, its people developed their own stereotypic views from limited contact with Europeans and those from other Asian countries. With the Western powers’ insatiable capitalistic expansion during the nineteenth century, coal was essential for the new steamship technology. Japan provided a good source along trade routes into Asia.

In 1853, The United States sent Commodore Matthew Perry to negotiate—and then at cannon-point—trade with Japan. With the Meiji Restoration—the tumultuous, emperor-mandated social upheaval converting Japan into a Western-style civilization—the European powers and the United States encouraged, armed and advised the growing Westernized Japanese military. From Marrin’s 22 pages of innumerable sources, he quotes an American journalist from the time:

“We can only hope that we may not find ourselves among the earliest victims of our overzealous and mistaken benevolence.”

Japan achieved relatively easy military victories in a 1894 war with China (in which China surrendered Taiwan) and the Russo-Japanese War (1904-1905). After those wars, buoyed by its successes, the Japanese military assumed control of the country, suppressed domestic opposition, and beat the notion of racial superiority into its charges. As Marrin writes:

A huge war machine, inspired by a corrupted version of Bushido, would be the instrument of conquest. The traditional “way of the warrior” taught sympathy for the weak, loyalty, self-control, and the dishonor of dying for an unworthy cause. Yet, as genuine samurai officers retired after the war with Russia in 1905, the sons of small landowners and shopkeepers took their places. At the age of 12 or 13, they were enrolled by their parents in military academies, where they were further brainwashed with racism and the concept of war as “the father of creation and the mother of culture.” The Bushido ideal of loyalty morphed into total, unquestioning obedience …

The military employed what social scientists call the “ladder of oppression,” Marrin notes. A superior officer would slap or whip his subordinate in front of the troops, that subordinate would slap his subordinate, and so on down to the lowest ranking soldiers. That kind of training resulted in the brutality and atrocities committed by the Japanese military during the Pacific War.

With Japan’s rapidly expanding population and dwindling natural resources—and to feed its war machine—the country’s military determined it had no choice but to acquire those resources through conquest. Dutch East Indies (Indonesian) oil and British Malaysian rubber were particularly attractive. The military invaded China in 1937 and Japanese soldiers, taking photos as souvenirs of their atrocities, had their film developed by Shanghai shopkeepers, who leaked their photos to the rest of the world.

Within Japan’s army was the infamous Unit 731, which conducted medical experiments on Chinese—and later American—prisoners. Marrin quotes a participant/eyewitness: “If we didn’t have a feeling of racial superiority, we couldn’t have done it.”

Nazi victories in Europe left British, French, and Dutch colonies in Asia “orphaned,” as Marrin states, stranding garrisons unable to be reinforced and thus vulnerable to Japanese conquest. With world outrage over Japan’s actions in China, U.S. President Franklin D. Roosevelt, whom Marrin documents as harboring a lifelong disdain for the Japanese, orders U.S. sanctions on the sale of scrap iron and oil to Japan—essential for Japan’s war effort. The country’s military leaders concluded that, if Japanese forces could cripple the U.S. Pacific Fleet at Pearl Harbor, the result could buy Japan time—even years—to grab the necessary natural resources.

Japanese Admiral Isoroku Yamamoto, who would lead the Pearl Harbor attack, advised against it, being Harvard University-educated and familiar with America. His superiors overruled him.
The rest is history. Marrin also covers how Americans, via stereotypes, did not view the Japanese military as equal adversaries or any kind of threat.

American prejudice and racism against those of Asian descent has been well-documented, although Marrin covers all—and more—bases than previous books on the forced confinement of Japanese Americans during World War II.

Another often-asked question is why weren’t German and Italian Americans expelled from the U.S. East Coast, when residents there on bathing beaches and in high-rises could see German submarines sinking Allied ships, and German spies were apprehended by the FBI? The U.S. Office of Naval Intelligence even cut a deal with Mafia boss Charles “Lucky” Luciano, reducing his prison sentence in exchange for mob members eliminating German agents. President Roosevelt considered the German and Italian Americans as constituting too sizable of a voting bloc to alienate, and dismissed Italian Americans as a “lot of opera singers.”

No acts of espionage or sabotage committed by Japanese Americans ever occurred.

It has also been documented that the U.S. government abducted those of Japanese descent in Peru, to be used in civilian prisoner exchanges with Japan. However, most of the Latin American countries bowed to U.S. pressure to cooperate. When arriving in the United States, “Immigration officials also took away their passports,” Marrin notes. “So, technically, they entered the country illegally, providing an excuse for the U.S. government to detain them during the war and deport them afterward.”

There are a few errors in the text, such as the statement that the original members of the Japanese American 442nd Regimental Combat Team in 1943 were drafted, when they actually volunteered from within the American camps—drafting them did not begin until January 1944.

However, with its contemporary connections—and lessons from history—and, though this book is geared for younger readers, it should be read by as many Americans as possible—to witness how suspicions and ignorance of others becomes “emotional rocket fuel, energizing long-held hatreds,” as Marrin describes, and “when things go wrong, the outcomes are the fault of the ‘Other.’”

With the looming political climate, will a book such as this be read—or denounced and dismissed?