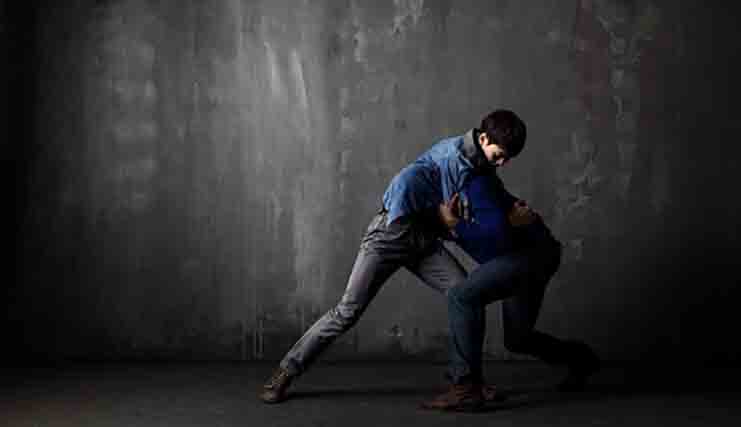 Since 2006, the Seattle International Dance Festival has been led by Cyrus Khambatta and his Khambatta Dance Company. In 2018, in addition to the annual 17-day festival, SIDF began presenting a Winter Mini Fest.

The piece to be presented at the Mini Fest, Two Bodies, is based in the interest of Unplugged Bodies in social theories. “Our company is now presenting a series under the title Homo,” Park said. “The first piece was a work of ‘Homo Ludens,’ a work based on Johan Huizinga’s theory, which was performed at MODAFE Closing Night, Korea’s prestigious dance festival.”

Unplugged Bodies expanded that series into a trilogy. “The second in the Homo series, which premiered last week, is ‘Homo Faber,’ which expresses human desire through tools under the theory of Henri-Louis Bergson,” he said. “This time, at the SIDF Mini Fest, we will present a duet which related to this theory.”

In addition to presenting its own work, Unplugged Bodies will collaborate with dancers from the Khambatta Dance Company to perform a new piece created in just six days by Kyoung-Shin Kim. “Since this new work with Khambatta dancers is a limited condition of a short creative period, I think the pre-research, musical understanding, and preparation required for the work will be of paramount importance,” Park said. “I look forward to meeting the Khambatta dancers for the first time.”

Park plans to do his homework so that Unplugged Bodies can remain focused in the moment. “Through the research and creation process with dancers, the focus will be on best expressing the theme of the work,” he said, “and we will try to maximize interaction with the dancers by composing music in advance and preparing props in advance.”

This new work is intended to launch a multi-year collaboration between the two companies. “I think collaboration is a new challenge and a precious opportunity to communicate with other artists,” he said. “It is thought to be a good opportunity to share a new approach to the subject, and I look back on my creative work with a reflective view and hope it will be an opportunity to develop into a better artist.”

Park hopes this U.S. performance is just the beginning. “Through the work of Unplugged Bodies, I hope the story I want to tell will be conveyed through the body, not the voice,” he said. “Through this process, I want to continue my international cooperation project with the U.S.”