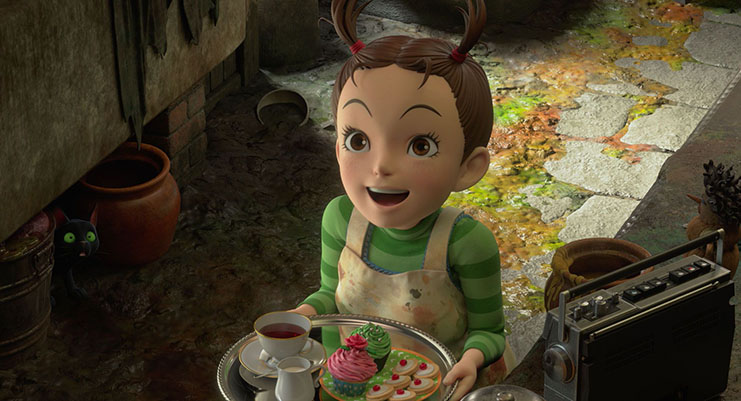 If I may, I’d like to start this review with a brief disclaimer.

Earwig and the Witch is the latest film from Studio Ghibli, the legendary animation film studio from Japan. I’m a huge fan of Studio Ghibli. Several of their films, from Castle in the Sky to The Wind Rises, are among my favorites of all time. Director and screenwriter Hayao Miyazaki, who cofounded Studio Ghibli, is a legend in the industry, whose impacts on filmmaking at large cannot be overstated.

So, it is with a heavy heart that I must say that Earwig and the Witch, directed by Goro Miyazaki, son of Hayao Miyazaki, is not good. The film manages to disappoint in several facets, facets in which Studio Ghibli films typically tend to impress.

The most obvious of these are Earwig’s animation and art style. Gone are the days of beautiful, hand-drawn art capturing a surreal world, as in Spirited Away, or of the wondrous beauty and violent intensity of nature, as in Princess Mononoke. Earwig and the Witch is made using computer animation of the most lifeless variety, featuring plasticine, emotionless characters set against uninspired, uninteresting backdrops. This is made all the more disappointing with the knowledge that several recent computer-animated films, such as Spider-Man: Into the Spider-Verse, have such a vibrancy and life to them.

What drags the film down even further, however, is its writing. The titular Earwig is a young, headstrong orphan girl/witch-to-be who gets adopted by unpleasant magical power-couple Bella Yaga and Mandrake. They butt heads, Earwig develops her witchy powers thanks to the help of the couple’s talking cat, Thomas, and, eventually, Earwig comes out on top. Along the way, Earwig listens to tapes from a band that share her name, and eventually discover that Bella Yaga and Mandrake, as well as her own mother, were members of the band.

Unfortunately, for as thin as the plot is, there’s a lot to dislike here. The story feels filled to the brim with setups that go nowhere interesting, and this problem is exacerbated by its relatively short running time of 82 minutes. The characters are underdeveloped and have little of the complexity that Ghibli characters are so famous for. The central conflict is uninteresting – orphan child vs. their unpleasant stepmother is about a bog-standard of a setup as you can get – and is resolved in uninteresting ways. Crucially, though, Earwig lacks the heart and humanistic streak of Ghibli’s best, and this is perhaps what hurts it the most. The magic simply isn’t there.

Again, though I’m disappointed to write a review like this, Earwig and the Witch leaves me little choice. There’s just so little to like here. As an admittedly massive fan of Studio Ghibli, I can only hope their next film is better than this one.

Earwig and the Witch was released on February 3.