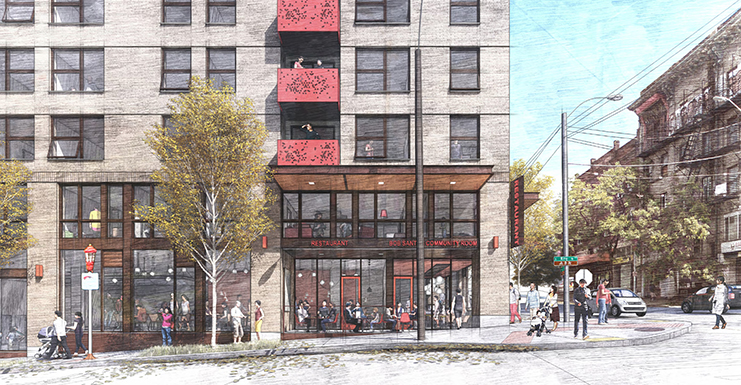 Legendary activist Uncle Bob Santos was a regular at Four Seas restaurant and Dynasty Room bar. They were places to party and socialize with the community, but also where activists strategized, and met with business people and politicians, “greasing the wheel” of politics, as Santos put it in his memoir.

Four Seas and Dynasty Room closed in 2017, and the building is set to be demolished. Until then, it hosts a pop-up bar and restaurant run by I-Miun Liu (who also runs Eastern Cafe, Oasis and Raised Donuts).

Set to open in the middle of 2021, Uncle Bob’s Place will be an eight-story building with 126 housing units all priced at 60 percent of the Area Median Income. A third of it will consist of two and three-bedroom units, designed for families. The tenants will likely span a range of ages and generations, said Leslie Morishita, real estate development director for InterIm CDA.

The project will feature public art, a community room open to the public, and has space for two businesses.

“In the way it functions it’s going to embody what his vision was for the whole neighborhood,” said Morishita. “Uncle Bob was all about affordable housing, especially for the most vulnerable in the community, and especially in a way that sustains the community to fulfill its traditional role of being a first stop for immigrants and refugees, and housing the low-income elders.”

The project is a collaboration between InterIm CDA, the family of Santos, including his widow State Rep. Sharon Tomiko Santos (D-Seattle), and the Chan family, which owned Four Seas and has operated Tai Tung restaurant since 1935.

After the Chan family decided to stop operating Dynasty Room and Four Seas, they decided to sell the land to InterIm CDA to build an affordable housing project. “For this piece of property it wasn’t the right thing” to put it on the market, said Evan Chan, who is representing his family in the project. “We just felt it was a good way to be part of the neighborhood and to kind of give back to the community.”

Chan family will own the ground floor commercial spaces, which can accommodate two restaurants.

One of these might be Bush Garden. The building that now contains the long-time restaurant and karaoke bar is set to be mostly demolished by developer Vibrant Cities to build a market-rate project, and Bush Garden owner Karen Sakata is working with InterIm CDA and the Chan family in the hope that Bush Garden can move into Uncle Bob’s Place, and be adjacent to a planned community room in the building.

“Uncle Bob was really good at partying, a very social guy, and a lot of really important work actually got done in Bush Garden and in the Dynasty Room,” said Morishita. “[His] methods were really about building one on one relationships, and he was always fun and funny…so it would carry forward his legacy in that way.”

There will also be a community room owned by InterIm CDA on the corner of the building, open to the public. Adjacent to one of the restaurants, it could be used for community meetings, organizing. “to support ongoing activism and advocacy for the neighborhood,” said Morishita.

Uncle Bob was a masterful storyteller, Morishita said, so the room could support storytelling programming.

“The idea is to really embody and educate about the history of Uncle Bob’s story and of the community, but as a springboard to carrying it forward with activism and advocacy and really grounded in that history, the social justice history.”

A core group of people who were close to Uncle Bob are helping shape the core mission and principles guiding how the project will be designed.

InterIm CDA is taking input from Sharon Tomiko Santos and Bob’s family in deciding how to use the building. Sharon Tomiko chose the name for the building, and wanted to commemorate Santos with something that carried his legacy forward in an active way – not just a statue or exhibit.

Given the intense development pressures in the neighborhood, the hope for InterIm is that the project will be meaningful.

“It’s here permanently, it’s a stake in the ground,” Morishita said. “Having more units available that are accessible to the really low income people that want to be in this neighborhood, or people who work at nonprofits or community organizations in the neighborhood, it just stabilizes what’s here for the people and the community that is historically here.”

“What we’re doing here, we feel very good about it,” said Chan. “It’s going to help provide housing and bring more residents to the neighborhood, and hopefully we can really activate the community and get it lively and have people walking around. That’s what we’re hoping for.”