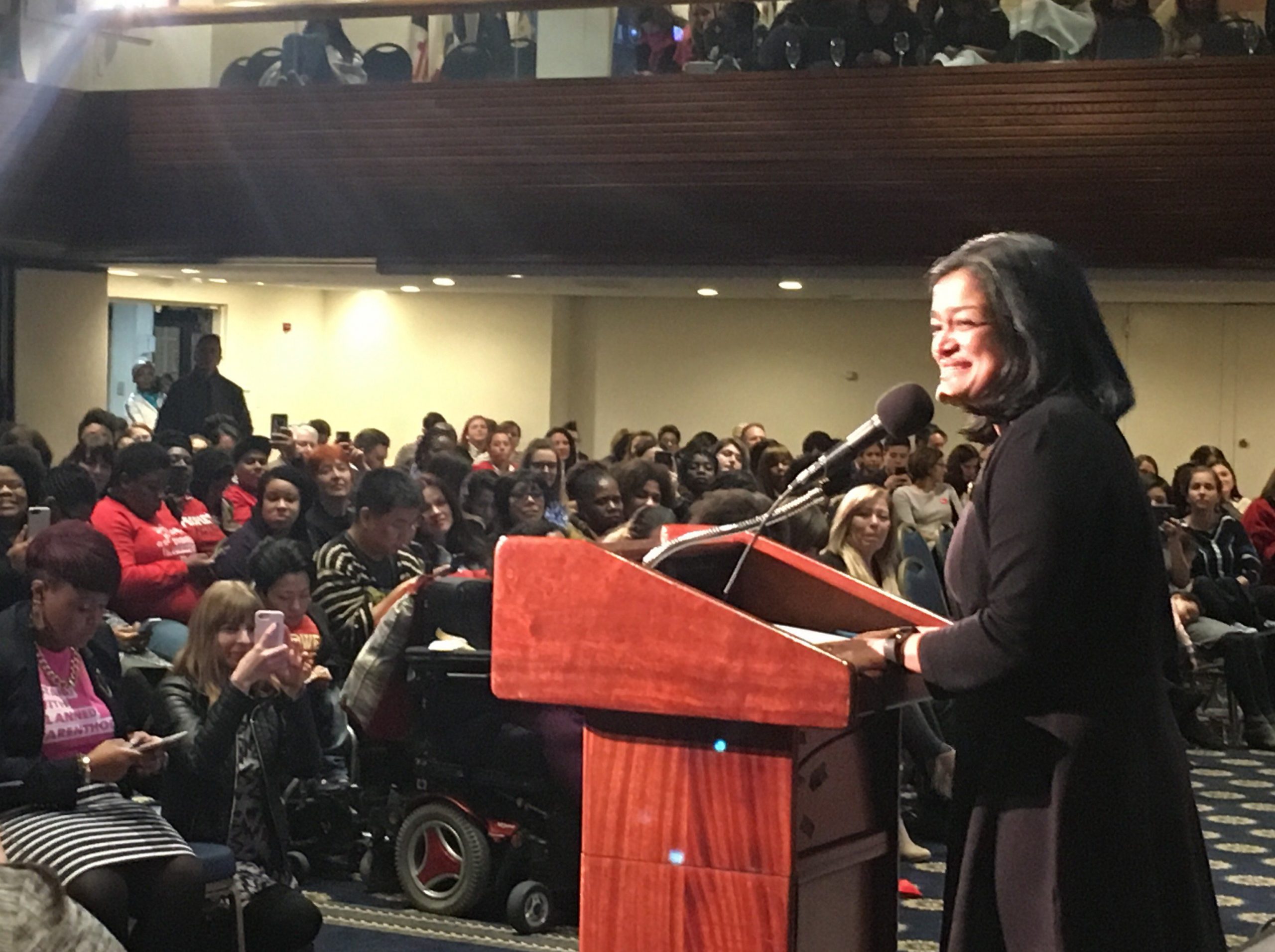 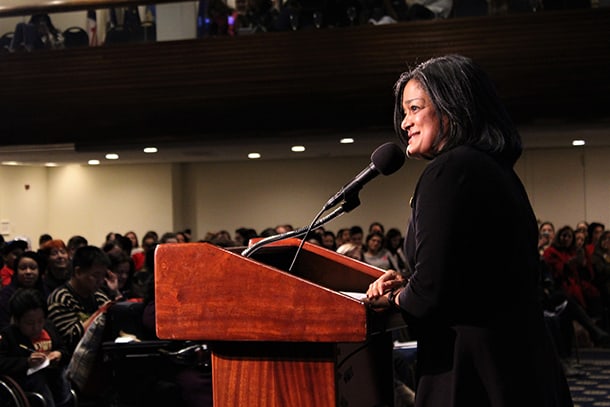 On Tuesday, U.S. Rep. Jayapal (Seattle, Burien and Shoreline) joined the National Domestic Workers Alliance and other activists to boycott the State of The Union (SOTU) address. Rep. Jayapal joined a few other members of Congress in refusing to attend the constitutionally mandated event in protest of Trump’s and the White House’s racist rhetoric.

“As I said tonight in my joint address with women leaders and organizers, the state of our union is strong when fearless people stand up against tyrannical policies and do not confuse xenophobia with patriotism, or vitriol for values,” Rep. Jayapal said in a statement.

This boycott of the State of The Union address wasn’t simply a symbolic partisan gesture. Yet, in the past, protests during the SOTU have usually occurred within the chamber. Despite the partisan nature of past protests, as of January 31, 2018, the current administration’s public approval rating is one of the lowest in history at a 54.9 percent disapproval rating. Members of Trump’s own party have criticized him for his remarks and actions multiple times and his various attacks on DREAMer youth and immigrant roundups. This affects over 11,000 people in the Asian-Pacific Islander community, according to a PEW study in 2014 and current estimates. All of this has precipitated an exodus of Republican congressional representatives and senators this year, as the 2018 midterm election approaches.

Despite the Washington Post, Fox News and a few other news outlets characterizing the SOTU address that Trump delivered as “a call for bi-partisanship”, Rep. Jayapal minced no words about the president in an interview with us after the SOTU address:

Cawthon: Over Twitter, you provided your reasoning for skipping the SOTU address, and you’ve been in D.C. a lot these days. Can you share how the racism coming from the White House affected your daily work in Congress?

Rep. Jayapal: I think the daily hurtful and racist statements from the White House – whether it’s equating people protesting white supremacists in Charlottesville, VA, to the white supremacists themselves last year, or rather, if he calls Haiti and African nations a vulgarity that I’m not even allowed to use on the House floor – fires up the base around resistance to any kind of solutions to any of the issues at hand. Including the fate of DREAMers! He uses those racist statements to throw red meat at 30 percent of his base. I believe it’s a shrinking minority base. He fires them up against policies which are in the best interest of the country. Policies which have bi-partisan support.

Whether that’s DREAMers, comprehensive immigration reform, whether that’s a healthcare policy that works for everybody. They tried to repeal the Affordable Care Act, and we fought back three times, and then they started to undermine the law, and he uses the divisive rhetoric, very divisive rhetoric to advance his policies. It’s hurtful to people around the country, whether that’s immigrants, Muslims who are tired of being called terrorists. Immigrants, API’s (Asian and Pacific Islanders) who’ve come to this country through family-based immigration. It’s demeaning, it’s beneath us, it degrades the office and it’s destructive.

Cawthon: You mentioned looking for bi-partisan support. Are any of your Republican colleagues sitting this SOTU out?

Rep. Jayapal: No. Many of my Republican colleagues, though, agree with me that he shouldn’t have said certain things and that he’s obstructing justice. They are not willing to stand up and say so and that’s troubling.

Secondly, the left has had a number of small victories and there’s a long way to go. In such a climate of silence in Washington, how have you been able to accomplish anything with the GOP’s permissiveness?

Rep. Jayapal: Cathy McMorris Rodgers is a part of leadership so she absolutely stands behind him. Jamie Herrera-Butler and Dave Reichert voted against Trumpcare, so I’m glad they did that. They won’t necessarily speak up but, they do think his comments are inappropriate but again, they won’t take him on. A couple of them have voted against him. Dan Newhouse actually led Republicans in Congress calling for a DREAM act to come to the floor.

They’re not taking him on around the Russian investigations, collusion with Russia, obstruction of justice. While they may criticize him, they don’t criticize him or his behavior or what he’s done in off. I think that’s troubling.

As for victories, I would say that we’ve had some pretty huge victories actually, especially at a time when Republicans control both chambers of Congress, the White House and the courts. We’ve been able to defeat Trumpcare three times! Those were huge victories. Defeating the Muslim Ban, the challenges around the Muslim Ban and the organizing that went on around it was huge stuff and the court declaring it unconstitutional was a huge victory. Even though they passed the GOP tax-scam, in the end, the American people understand. It was one of the most unpopular bills to ever come to Congress and it was a victory that we were able to communicate to the American people – what was in this tax scam and how outrageous it is that 81 percent of the $1.3 trillion in tax cuts will go to the wealthiest.

I think that we’ve been successful because people have been organizing on the outside and in districts across the country that no one ever thought were competitive are suddenly competitive. Moderate Republicans like Dave Reichert, there’s a whole slew –  about two dozen of them – their districts won’t tolerate them going along with the President, and yet they don’t want to run and have challengers that would most likely win in this environment.

There are a lot of wins in this dark time, a time I would characterize as a constitutional crisis.

Cawthon: I don’t want to minimize your victories but, it’s a lot. You and your colleagues seem to be facing a lot of challenges. On NPR this morning, sources from the White House say that this speech is meant to be ‘unifying’ and emphasize a “safe, strong and proud America”. Do you think the SOTU will be conciliatory?

Rep. Jayapal: Don’t worry I didn’t take it that way.  As for the SOTU, I think that if he sticks to the teleprompter, [his staff] probably wrote him a decent speech. His behavior over the last year and his behavior this year shows that he has a teleprompter because he actually needs it. Unfortunately, his behavior over the last is contrary to the idea that he wants America to be safe for everyone and create unity and I think people will be hard pressed to argue that. What he does tomorrow, the next week and the next month is the question.

If he just gets through the speech without going off cue then people will say, “Oh, that was a great speech.” If he says “bipartisan”, people will say, “See? He wants to be bipartisan.” That’s not how he’s acted, it’s not what his qualities are about, and it’s certainly not the direction that he’s signaled over and over again as to where he wants to go. He’s catered time and time again to this racism and fear in people.

Cawthon: On immigration, the crackdown has been widespread and has hit home here in Seattle, even targeting workers at their jobs and notable undocumented activists. How are you working to fight against this, and how have your constituents been affected?

Rep. Jayapal: I’m on the Judiciary Committee and the Immigration Subcommittee and I’ve been working tirelessly to keep the [budget bill] from passing and hold Attorney General Jeff Sessions and Presidential Chief of Staff John Kelly accountable. Many constituents have reached out to me and we’ve been successful in some cases and not in others. We’ve attempted to draw attention to the abuses and excesses of ICE and other law enforcement agencies and spotlight unconstitutional behavior.

We will use our office to draw light to these things, get as much attention and lift up these things to the relevant departments as possible.

I would like to just highlight with reference to the Asian Pacific Islander community that obviously we’re seeing deportations of immigrants and prominent activists. The currently proposal from the White House would upend the current immigration system. Republicans and the White House have been trying to frame family-based migration as “chain migration”, they love saying this instead of saying that they want to end family reunification.

We can’t let them take away family-based immigration or hold DREAMers hostage.

Cawthon: I know you’re running out of time, but what’s the scenario that you imagine will play out in D.C.?

Rep. Jayapal: We certainly appreciate letters to our offices, and every member of Congress gets them. We also have to turn out in the streets. Right now, we’re going around the country and making sure everyone understands that this is what the Republicans being in control of every part of government looks like.

Also there’s a lot of amazing community-based efforts in expanding the base of people who may not be with us on every issue but are with us on understanding that this is the right direction to go. Organizing is ultimately the way to win anything, organizing inside Congress and organizing outside Congress is about building a movement to demand better. For me as an elected official, I work every day to try to use my platform to vote on a piece of legislation to believe government matters.

As to what we can advocate for: we need a DREAM act. What we need to do is immediately pass a DREAM Act and if you look at the bill introduced by Rep. [Pete] Aguilar (D-CA) it has some of that but, it has a lot of border security improvements. Not a wall but many technological improvements and solutions, and that’s the direction we need to follow. I think it’s over 30 Republicans on that bill and if that bill were to come to the floor, it would pass. House Speaker Paul Ryan needs to let that bill come to the floor for a vote, and Trump is making it sound like he’s given us so much when he’s the one who made the DREAMers deportable by rescinding DACA. He’s holding these people up for ransom in order to get what they want, and we’re not going to let that happen.

Cawthon: Do you think that your caucus may have to pass a spending bill to fund the government that doesn’t include a DREAM Act or save family migration?

Rep. Jayapal: We’re holding very strong as a caucus so we can get as clean of a DREAM Act as we can get and as narrow of a bill that we can get. We’re holding strong as a caucus so we can get the kind of deal that saves DREAMers and family-based migration. I hope that we continue to hold strong and the caucus continues to hold strong for refusing to support a deal that ends legal migration. These are things that are important to the Black, Asian and Hispanic Caucus.