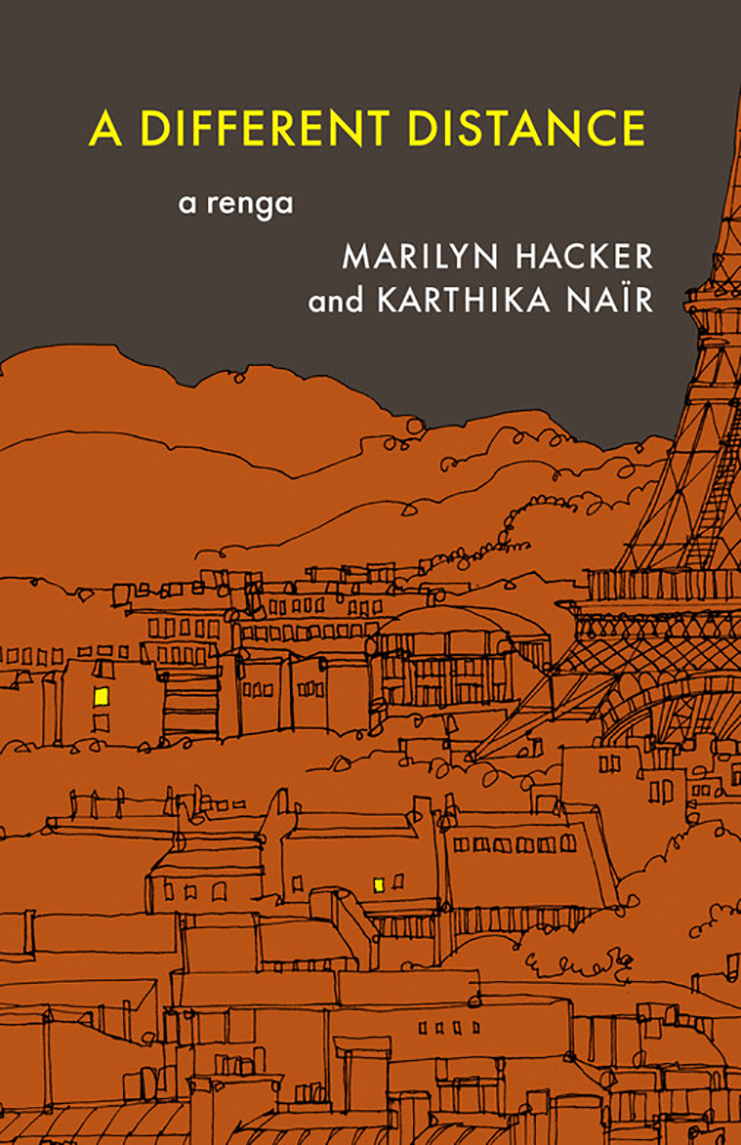 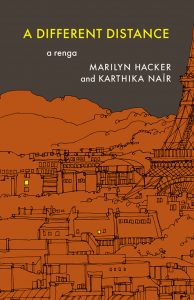 Two friends, poets living in Paris and isolated by the pandemic, create a sequence of poems in which they chronicle the times—the isolation, illness, the impact on community and the world, the pleasure of connection through words. Spanning 2020 and beginning with the lockdowns in March, these poets use the renga form, in which two writers exchange poems and each one responds to a word in the conclusion of the other’s verse. The result, a collection called A Different Distance feels like a long conversation, a volley of words, a linguistic dance. The collection begins on March 29, 2020, and continues through March 31, 2021, with poems exchanged several times each week.

The collection begins with each poet focused on the local; for Hacker a view of “the plague spring” of flowers blooming in an abandoned square, and for Naïr a view of “human unblossoms outside/baker-butcher-grocers’ doors.” The poems grow to encompass wider and wider circles of people and places.

The poets write of family and friends in different countries. For Naïr, it’s her parents and their quarantined lives in a COVID-ravaged India, the desperation of migrant laborers forced to trek for miles when the Indian government abruptly goes into lockdown. Hacker writes of covering her face before her head as she enters a mosque, and she peaks of her “solo atheist iftar” in Paris as she imagines her friends in Algiers and London whom she may join next year.

Intertwined with these stories of friends and families separated by quarantine — the globe eerily brought together by the virus and its devastating power—the poets also chronicle the disease’s impact on their bodies. Naïr who suffers from a genetic condition that makes her skin fragile is also battling cancer and spending times in isolation in hospitals while undergoing chemotherapy. She writes of the triple threat to her body from the genetic condition, cancer and COVID-19 and the compassion and care of her doctors and nurses who keep her alive and sane. Hacker touches on chemo undergone in the past, of medical students and interns protesting conditions on the streets of Paris, and worries about a child who is an ER doctor in a different country. These poems range from the ordinary—rare walks in the city, cooking aubergines, connecting with people virtually—to the extraordinary—life-threatening illness, doctors taking to the streets to protest safely, disasters like the Beirut explosion.

The renga form underscores the plasticity of language and the ways in which we can use the same words differently. Naïr writes of “first touch of drink/ (organic) outside home and/ hospital since March” at the conclusion of a poem on July 4, 2020. On July 6, 2020, Hacker responds with a poem that begins: “Since we want to march/ from the hospital to the/BDL and set/up our tent…” The use of “March/march” highlights how differently the word resonates in each poem—from a marker of time for a private milestone to a political act to protest working conditions.

These poems will resonate with every reader as we can all relate to the isolation, anxiety, fear, illness, and loss. They also remind us of the joys of community and of the ability of words to document, clarify, and acknowledge our collective humanity. The pandemic has begun to generate many literary works and this one is outstanding for its form and beauty.

Pandemics in a time of change in Asia and the world