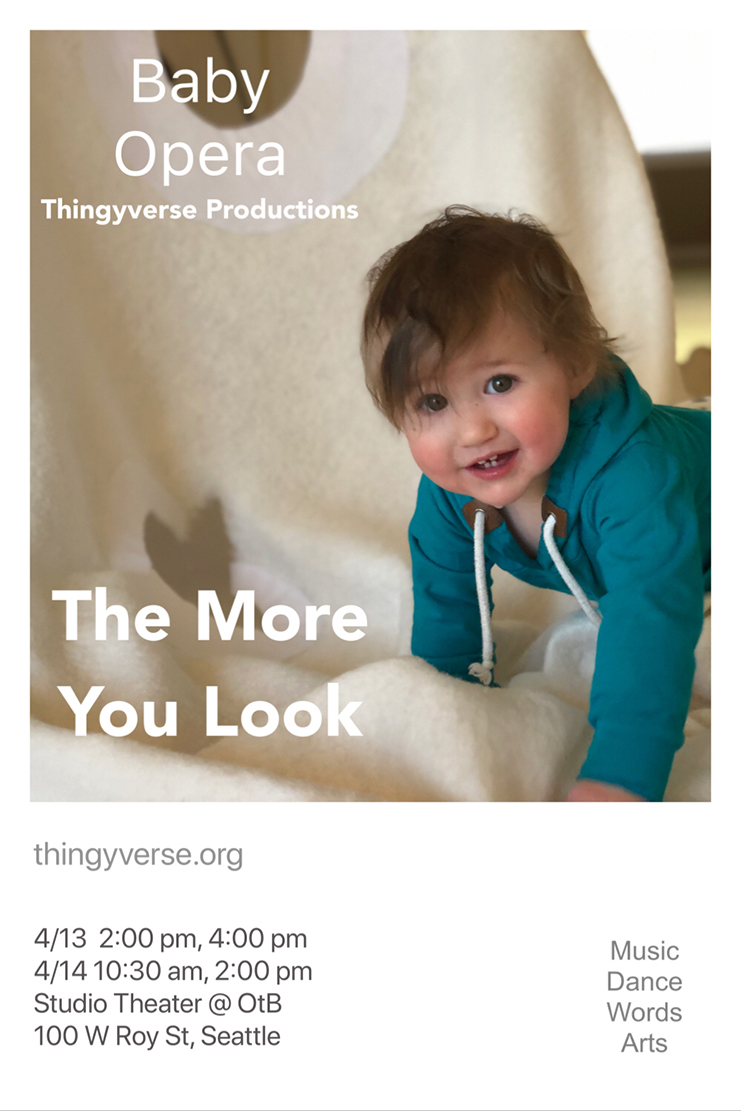 A new genre of work is being created for the youngest of audiences: baby opera. Thingyverse Productions will soon present the first baby opera at On the Boards, called The More You Look.

Founded by local moms Susie Lee and Ying Zhou, together with Emily Greenleaf, Thingyverse Productions was conceived and developed over several years. “I was a mother in Beijing with two preschoolers,” Zhou said. “As a theater artist, I couldn’t get excited or agree with the approach about any shows available for children that first year I was there.”

But then Zhou attended the First Danish Children’s Theater Festival in China and saw theatre for babies for the first time. “The shows were experimental, poetic, and beautiful, great theater works, children or not,” she said.

After that eye-opener, Zhou began her forays into theatre for babies. “I went to Denmark to visit their Children’s Theater Festival and witnessed a vital European scene,” she said. “In 2015, I started a company with a friend in Beijing to produce forward-thinking theater for the very young.”

Then in 2018, Zhou returned to the United States and encountered Susie Lee, who, at age 44, was becoming a mother to a new daughter, Hana. “I was struggling to understand this unfamiliar creative identity, and Ying saved me,” Lee said. “She asked me to design the set for her next children’s show in Beijing. I didn’t have the capacity to build, but I could envision and design it.”

As baby Hana approached her first birthday, Lee wanted to focus more on Hana’s age cohort. “I asked Ying and another long-time collaborator, Emily Greenleaf, if we could create a baby-centered piece, and they totally jumped in,” Lee said. “Lesley Hazleton, a fantastic local writer and friend wrote the script. Last October, we workshopped The More You Look, wondering if there was any interest in this type of work here, and the response was a resounding yes.” 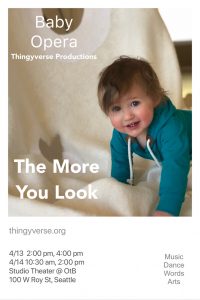 Zhou agreed. “Babies and experimental theater, two things seem so far away from each other, are actually such a natural pair,” she said. “But when you watch a six-month old sit through a performance, engaged and even responding, you know there is something there.”

She feels that babies are subject to too much training and not enough confidence. “The most important thing is probably how little we know about, and underestimate, babies,” Zhou said. “Both babies and experimental theater are risk taking, boundary testing, meaning making, and at the core both are driven by curiosity, creativity, and imagination.”

Still, there are parameters, such as the 20-minute duration of The More You Look. “Many people assume that babies have no attention span or minimal focus, but that’s not true,” Lee said. “As a whole, 20 minutes is about how long this audience can stay engaged before a diaper needs to be changed, a snack eaten, a nap needed.”

These practicalities of baby care imposed a creative challenge on the artists. “The cap in length is a great forcing function to rigorously edit the work,” Lee said. “Much of the feedback from the workshop was how engaged the babies were for the entire performance.”

Developing new work and running a new theatre organization both pose numerous challenges, especially for mothers of young children. “Definitely finding large blocks of time for structured and unstructured creative thinking, processing, and development, particularly as a single parent with a 17-month old, and then finding overlapping times to be able to work with others,” Lee described these challenges. “With Hana in my life, I get more done in two hours than I could before in half a day.”

However, Lee and Zhou credit their partnership with each other and with Greenleaf. “Ying and I trust each other fundamentally and there is clarity and honesty in our partnership,” Lee said. “We grew up very differently, she in Beijing, I in North Dakota, and live very different lives, but we share a particular idealism about the transformative ability of art, the curiosity to dive in and try new things artistically and professionally, and when we say we’re going to do something, we do it.”

Another challenge has been the current climate of thinking surrounding the development of infant brains. “One thing I’ve found exasperating and limiting as a new parent is the prescriptive, authoritative, and anxiety-producing nature of so much parental advice,” Lee said. “And everything seems to be preparing children for the next stage, always in the service of ‘education.’”

But Lee asserts that she is not anti-education. “I’m Korean, for goodness sake,” she said, “but learning happens also, and perhaps even more meaningfully, in the ‘not knowing’ space, a space where observation, experimentation, and creativity exist. It’s where artists thrive.”

And the artists of Thingyverse Productions have bigger plans beyond their current production. “We are going to expand the experience beyond the performance for children and caregivers to include creative workshops afterwards,” Zhou said. “These will encompass not only exploring the stage, making objects, and learning melodies and movement, but also empowering families with the confidence to take the imagery, melodic lines, and gestures and develop and expand these creatively in their own homes.”

All of these goals are founded on a pronounced respect for babies as they are. “Our organization Thingyverse is committed to creating art, not edutainment, for babies,” Lee said. “We approach children as not just ‘becomings’ towards the next phase of life, but ‘beings’ who have a right to their own cultural experience.”

The More You Look: An Experimental Baby Opera runs April 13 and 14 at On the Boards, 100 West Roy Street, Seattle.