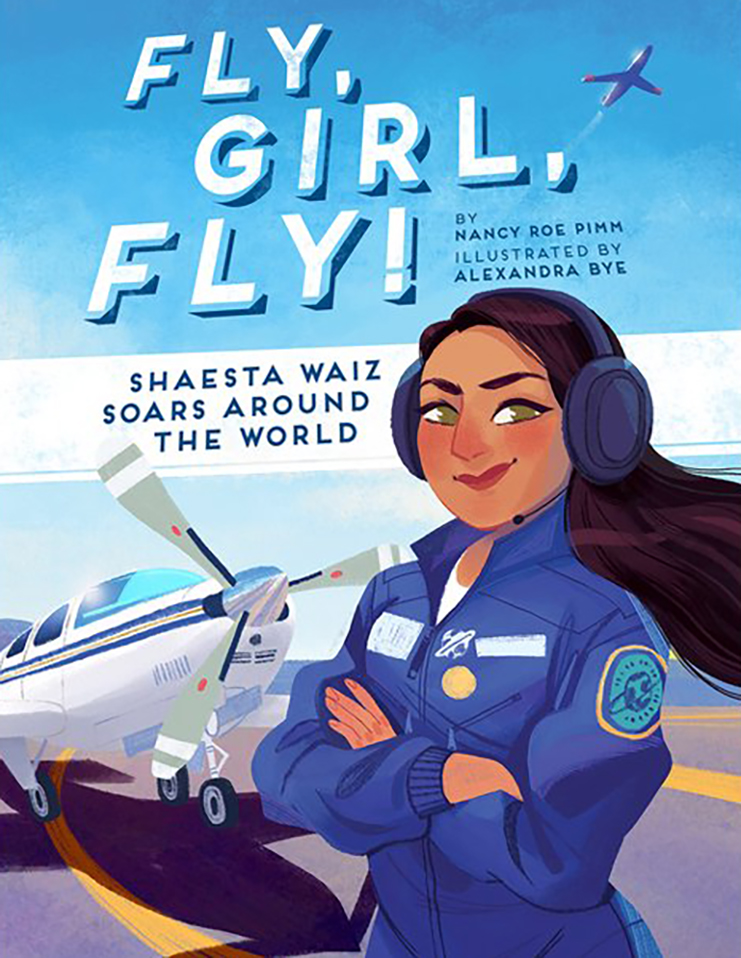 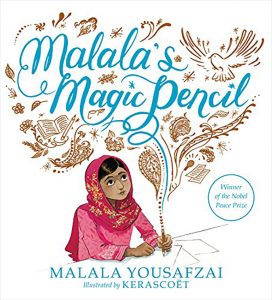 While young Harold, with his purple crayon and Charlie Brown hair, shows some real creativity, there’s a modern girl who has a magic pencil hitting the shelves. And get this…she’s real! Written by Nobel Peace Prize winner Malala Yousafazai, Malala’s Magic Pencil shows kids that their voice can be powerful against oppression and make the world a better place.

Like many other books, Malala describes her family, her wishes, and some of her observations—one of which is that not all children go to school, which was Malala’s favorite place. As Malala grows up, she describes how “powerful and dangerous men” decided that girls could no longer go to school. Famously deciding to use her “magic” pencil to write and speak out on television, Malala was then targeted as the “powerful and dangerous men” tried to “silence” her. But, as well all know, Malala persevered and not only escaped, but also unified the globe in a powerful message around the importance of education for girls in the Middle East.

By just opening the front cover, the reader knows Malala’s Magic Pencil is a special book. The inside cover is filled with a golden copper sheen interrupted by Kerascoët’s illustrations of mandalas that feature books and pencils. The same golden copper marks are used throughout to indicate Malala’s writings, drawings and ideas: starting with drawing locks to keep her brothers out of her room all the way to the education advocacy work she is known for.

While the Taliban and the attempt on Malala’s life are hinted at (read: “powerful and dangerous men” and their attempts to “silence” her), they are never discussed directly or in any sort of depth. In fact this book would grow with kids for a few years:  kids would be drawn in by the fun, swirly, golden illustrations from Malala’s pencil; then by making observations about how and where her family lived; then finally by being able to read a letter from Malala herself, as well as the short biography at the end.

This book is a rare gem that captures a true story in a fun and accessible way, while also giving children a window into another part of the world. Markers, pens or pencils gifted along with this book would make this a special present for a child with a lot of imagination and strong opinions. 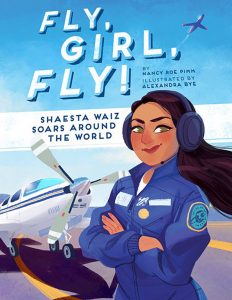 A book that pairs well with Malala’s Magic Pencil is Fly, Girl, Fly. This true story highlights the accomplishments of Shaesta Waiz, the youngest woman to circle the globe on her own in a single-engine aircraft. Much in the similar way that Malala advocates for the education for young women, Shaesta not only flies around the world alone, but on her stops, she spoke to children, many of them young girls, about her story and following her dreams.

While Shaesta’s story begins in a refugee camp in Afghanistan, her family quickly relocates to California and within a few pages, has graduated from high school. Even though Shaesta originally had a fear of airplanes, her first flight convinced her that she needed to be a pilot. The rest of the book focuses on her learning to fly and eventually flying around the world by herself.

This true story, told by Nancy Roe Pimm and illustrator Alexandra Bye, has bright, colorful pictures that are emotional and reminds you of a well-made animated movie. Fly, Girl, Fly is a wonderful journey of its own, but would be well-paired with Malala’s Magic Pencil, especially for a child who is looking for a good story, beautiful illustrations, and inspiring role models.