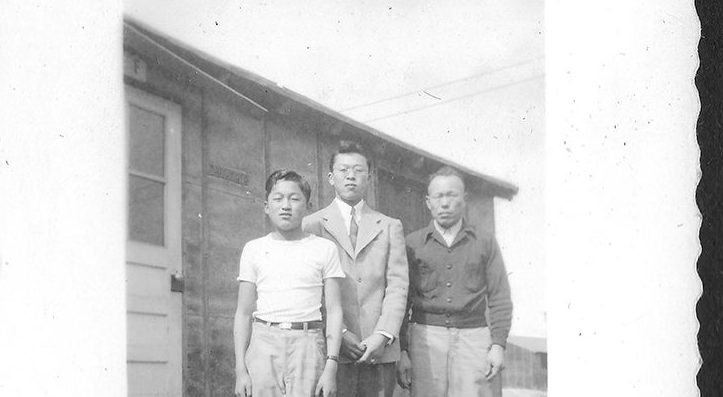 Frank Tsuboi is the son of Frank A. Tsuboi and nephew of Hideko Shimomura. His cousin recently found his father’s and aunt’s testimony to the Redress Commission on Wartime Relocation and Internment of Civilians in September 1981, held on the campus of (what was then called) Seattle Central Community College.  Due to a recent stroke, his aunt submitted her testimony in writing but his father testified in person before the commission.

“My sister has been sharing my dad’s testimony with some of her friends and former colleagues from Seattle Public Schools and received many compliments on my Dad’s eloquent testimony,” Tsuboi said in an email the IE. “Several people have encouraged her to share it because these stories provide a glimpse of what the war years were like for our parents, and grandparents, and because it’s so relevant to what’s going on today since Trump became President.”

The International Examiner thanks the family for sharing these testimonies.

After approximately 40 years since Executive Order #9066, I have been reflecting almost an equal number of years on the whys, causes and effects good and bad of Executive Order #9066.  I welcome this once in a lifetime opportunity and privilege of addressing the Commission on Wartime Relocation and Internment of Civilians to relate a portion of one family’s story.

I cannot help but conclude that Executive Order #9066 was truly an unjust act on a group of loyal Americans innocent of wrongdoing.

It is my hope the Commissioners will come to a similar conclusion and act on their findings to Congress to rectify past wrongs, act to prevent repetition of acts similar to E.O. #9066 and educate on a national level the true plight of the Japanese Americans after December 7, 1941.

I wish to thank those whose effort made possible the COWRIC.  Namely, President Jimmy Carter and the Nikkei representative in Washington, D.C.

On December 7, 1941, I was an 18-year old student at Curtiss Wright Technical Institute of Aeronautics in Glendale, California.  The FBI rounded up the approximately 6 to 8 Nisei students and individually questioned us in depth.

In early February 1942, all Nisei students were ungraciously asked to leave, expelled.  That temporarily ended my pursuit of an aviation career. To the credit of my fellow Caucasian students who were a cross section of Americans, we received much sympathy.  I suspect the school administrators in concert with the FBI had privileged information of the forthcoming expulsions of the people of Japanese ancestry.

I drove home to Seattle in my 1932 Chevy convertible and sold it to a friend for $50. Shortly thereafter came the military directives and Exclusion Order. We had to leave Seattle.

My father had to sell his grocery business. He was one of the more prosperous independent grocers. He felt fortunate in making the sale of his business, stock, fixtures and furniture for $2500. Thus, on that day in April, virtually his entire estate was sold (lost) for $2500. My father never regained his prewar economic stature in the postwar period due to lack of capital, spirit or the combination of both. He is now retired and resides in Seattle.

His prewar affluence allowed my older sister to attend Juilliard School of Music in New York City and me to attend aviation school in California. I would conservatively estimate his financial loss at $50,000. My sister later returned from New York City to join us in Hunt, Idaho, because the financial burden was too heavy to sustain.

Our family consisted of Mom, Dad, three sisters and two brothers. Approximately May 2, our family taxied to an appointed departure point and boarded a bus for Puyallup. We carried all our worldly goods consisting of clothes, blankets and toilet articles.

As I walked through the guarded gate into the Puyallup fairgrounds, I had terrible visions of things to come. My thoughts ran to what we had learned about democracy and the Constitution; they went out the window. To what limits would the United States Government go I wondered – if they arbitrarily confiscated my civil rights and imprisoned me without due process. I truly feared for our survival, especially when we were at the mercy of a racist like General DeWitt.

Camp life was primitive, confining, crowded, lacked privacy. It was like a prison, but we endured. There was a bright side though; we were among friends.

I remember the guard who attended his 50 Cal. machine gun on top of the grandstand overlooking our living quarters, and his search light at night. I remember the plugged toilets and a chance to leave the area for a few hours one day. I was on a detail to scoop out the sewage from the cesspool into garbage cans which were loaded onto trucks. We were allowed temporary freedom when we dumped the contents of the cans into the Puyallup River. That short respite from confinement was a fine feeling.

We were moved to Minidoka, Idaho, in September 1942, and I found living conditions and the harsh desert atmosphere worse than I could have imagined. Camp life in Hunt was harsh and one had to adjust to change in environment – the extreme temperature in the summer, the frigid winters and the ever-present dust. But we did endure.

The government further complicated our lives with the loyalty questionnaire which had serious consequences if answered in the negative. I had never considered myself other than a loyal American. My country had done me wrong but unquestionably I would be loyal to the end.  That was my sentiment in total.

To the credit of our Niseis who were part of the 442 RCT who served, fought and died; they made the greatest contributions for the Nisei cause and I will feel forever grateful to them. Memories are short, however. Many Americans do not even know of their existence.

I served my 18 months in the Army shortly after the VJ-Day, took advantage of my GI Bill and completed an A & E course some 6 years after the interruption in California.

Without question, all evacuees suffered financially, socially, psychologically, physiologically but individually, by different degrees.  Many have been unable to adjust and are today dependent on the dole.

Redress is necessary. An apology from the government is inadequate. Damages inflicted by the government through their misjudgment must be compensated. That’s the American Way!

On December 7, 1941, I was twenty years of age, attending the Juilliard School of Music in New York City. I lived at the International House on 125th & Riverside. At the outbreak of the war, I was very uneasy and very frightened. With the order of evacuation for my family in Seattle, I could no longer go to school because of financial reasons. I quit school and left the International House and worked in Connecticut in a home as a means of supporting myself. I soon left to join my family in camp as they were very worried about me and were concerned for my wellbeing. Camp was a shocking sight. Muddy, wet, cramped quarters with no privacy as a family.

As I look back after forty years, it was a real injustice to American citizens and truly a deprivation of our civil rights. Conditions being as such, and being immature, there was not an utter of protest except for the few daring ones. We tolerated a lot humiliation, poor living standards without complaining. I guess we were ignorant that we did have the right to free speech and did not make ourselves heard.

My father had two grocery stores and it was a complete loss for him. He did not get a penny for his fixtures or his inventories. He received something like $50 for his 1940 Chevrolet. We lost our furnishings as no one would pay us for anything. The mental agony of being Japanese and being looked upon suspiciously really gave me a severe complex in which there was a deep withdrawal in personality. My dear friend in New York, who also lived at the International, got a nervous breakdown and since then she has been in and out of hospitals and has never been her own self. After both parents died, it was a shock to her, and she is better now where she lives in a group home and is working at a sheltered workshop.

In 1944, I left camp to be married to my husband. We were married in Chicago, in between furloughs, and went to Minneapolis where he was to report to the Military Intelligence School. We found a one room unit where we cooked, slept and ate. Soon after, my father came out and stayed with me until he found a job and housing for his family. He settled in Minneapolis about six years.  I lived in Minneapolis until my husband discharged from the Service.

Post evacuation in Seattle was a difficult adjustment. My husband could not find a job, so he worked as a gardener for a year or two.  We lived in the Seattle Housing Project in the Rainier Valley District. We felt the sneers and jeers, and we were trying to be as inconspicuous as possible. We tried to hide from heritage, consequently our offspring were denied their knowledge of their heritage.  We have always lived as second-class citizens with an inferior complex.

My husband did not like being treated as a second-class citizen, so he was always challenging the system in the business he was in.  He has been deceased for 14 years. The proud Isseis were not so proud being held in camp as prisoners.  It was real humiliation to be marched off to the assembly centers and then to the camps in the middle of the desert, being imprisoned for a crime they did not commit. Seeing a sentry with a gun on the other side of the barbed wires parading and doing his duty was not a pleasant sight from the inside.

Evacuation certainly destroyed education opportunities for many of us. It disrupted our life at crucial points. We have lived with complexes, insecurity in this land of freedom because of economic exploitations, racism, and mass hysteria created by the press.  I hope for the sake of my grandchildren and their grandchildren, there will never be another mass evacuation. “In God We Trust”.