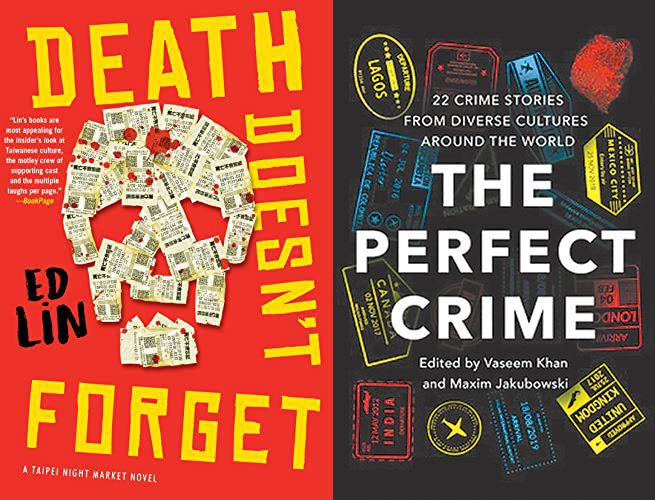 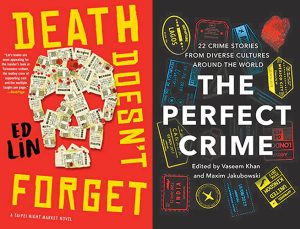 Two recent books of crime fiction stand out. One of them is an anthology of short fiction and the other is part of a popular mystery series.

This anthology of crime short stories showcases diverse authors who are often underrepresented in the crime literature and in that it might be a first. Both established as well as up-and-coming authors contribute their pieces, all of which are accomplished. and they encompass a variety of sub-genres. A word of caution: Readers hoping for a global ride might be disappointed. Many of the stories are set in the West and have predominantly a British or American feel. The varieties of crimes depicted here are, however, likely to suit a wide range of readers. Here are some examples.

In Amer Anwar’s Quiet Night In, set in South Hall, London, Tej, the protagonist, receives an unexpected visit from an old friend. Contrary to his expectation of a brief pleasant interlude, the long conversation over drinks unearths memories of their respective criminal pasts and ends tragically.

Vaseem Khan’s Death in Darjeeling set in the 1950’s, in which a tutor dies from a fall in the mountains involves a coded message and a set of suspects. Persis Wadia, a female detective, appears just in time to solve the murder mystery.

A dark and disturbing tale of urban hate-crime, The Yellow Line by Ausma Zehanat Khan, starts with the ominous sentence, “He followed her home again.”

Ed Lin is a journalist and mystery writer, living in New York. This book, the fourth in his Taipei Night Market Novel series, takes place in the capital of Taiwan.

The story starts with Siu-lien, a middle-aged bar hostess who works at BaBa bar, and her live-in partner Boxer. “She was still pretty, especial when you first saw her, like a colorful beach stone still wet from the tide.”

One morning, Boxer, a petty criminal and once a part of a gang, leaves her place. He intends to go to the bank to cash in on the winning lottery ticket that Siu-lien has bought. This, despite her protests—she doesn’t trust him with the money—which she thinks he’s likely to spend on his good-for-nothing friends.

After Boxer fails to return for hours, Siu-lien contacts her estranged daughter Nancy, a college student, and her boyfriend, Jing-nan. She asks them if they would find a way to coerce the money from Boxer. She’s poorly paid and the sum means a lot to her. Jing-nan, who owns a popular night market stall named Unknown Pleasures, assures Siu-lien of his help, and goes in search of Boxer.

Unfortunately, Boxer is found murdered and Jing-nan becomes a suspect. He must now prove that he’s innocent. Another murder follows and the appearance of people of aboriginal descent further complicates matters.

Instead of a picture postcard view that tourists might get of museums, memorial halls and tea houses of Taipei, Author Lin offers us a slice of the gritty street life there. As a bonus, he makes us aware of the social and political challenges faced by this island nation.

Bharti Kirchner, the author of eight novels and four nonfiction works, is a frequent contributor to the International Examiner.