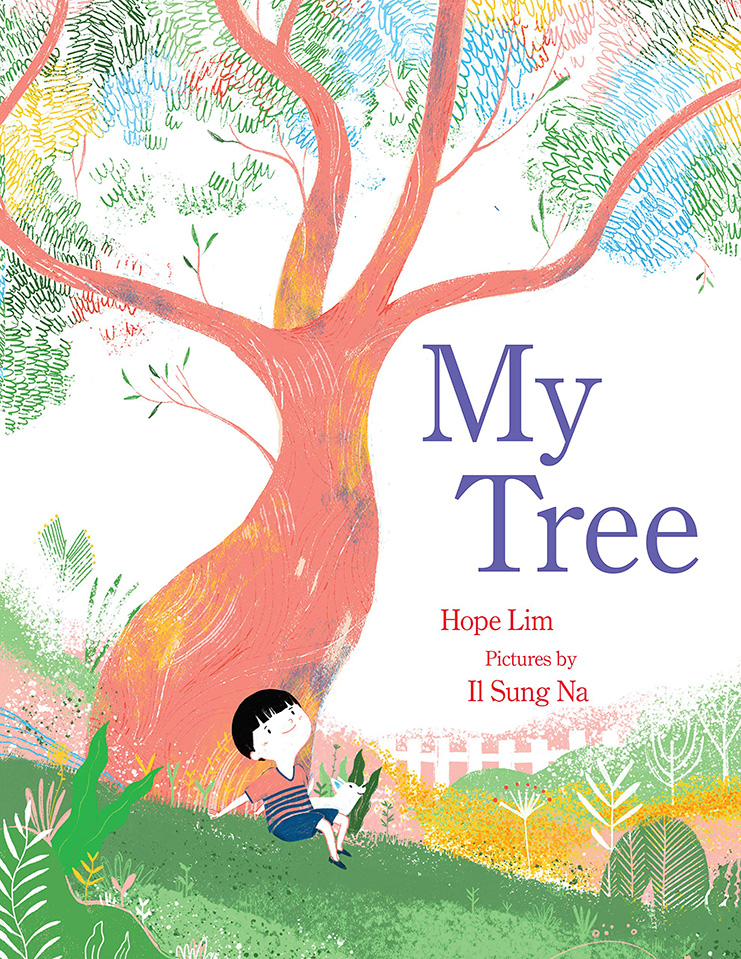 Nature provides us with many resources. We get fruit from some trees and bushes. We also find greens for our soups and salads. The two books presented here show how trees and watercress give us a place to enjoy life and can feed our bodies. 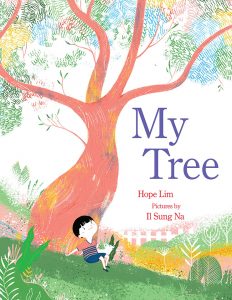 The first book, My Tree, is about a young boy who finds a tree in his yard in his new home in the United States that reminds him of a persimmon tree he loved in Korea. The tree in America has many purple plums. He calls his tree Plumee.

The boy is lonely after his family moved to America from Korea. He finds a special place in Plumee’s branches so he can hide but still see what went on in the neighborhood. He plays on his tree finding little nooks and cracks. The young boy takes care of his tree and waters it. He enjoys the white flowers that bloom on his birthday, and in the fall, he would pick its purple plums and give them to his friends on the block. He loved Plumee because it made him think of his home back in Korea.

There is a huge storm and Plumee falls to the ground, and its roots are “pulled out of the earth, worn out and sad.” The tree is now on its side, its long branches stretching out. The boy and his friends played on her as a ship, a rocket, and an island, until one of the children falls from the tree and hurts himself. Plumee now has to be taken away. The young boy is sad that his friend, Plumee, is gone. Then, in a couple of days, the boy and his dad plant a new plum tree.

Under the boy’s care, it begins to grow and even has white flowers like Plumee. The young boy is happy to have a new friend.

This is a quiet and sweet story of a boy and his tree. The text is like a poem that floats on the page. The illustrations are soft and show the closeness that the boy had with his tree. 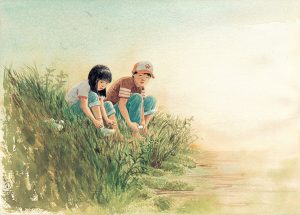 The second book, Watercress, is about a family trip that teaches a girl about her mother’s experiences as a young child. As the father drives the family along a road in rural Ohio, the mother sees something that reminds her of China. It is growing in the ditch on the side of the road. The father stops the car and both mom and dad run out into the water. They see something so familiar. They make their daughter and son walk to the ditch, too. The water is cold, but the parents do not seem to mind. They are busy collecting bright green stems with roundish leaves. They are holding bunches and bunches of them. The daughter is embarrassed to be seen walking in the ditch gathering what to her looks like weeds.

As immigrants, their mom and dad have precious memories of China that their children know nothing about. The daughter has been bullied and excluded by her classmates; she is unsure of her Chinese heritage, she does not want to be different from others in school. However, her parents are proud of their Chinese background. Her mom had been poor in China and her family made use of every plant they could. Her mom remembers being hungry as a child, but her family was grateful to find watercress to use in their meals. Watercress helped them survive and reminded her of the closeness of her family. As in China, the young daughter’s mother knew how to make a delicious dish of watercress mixed with garlic, sesame seeds and oil.

The daughter begins to understand that her Chinese culture is one of strength. The young daughter realizes she should not be ashamed of her heritage and parents. She starts to appreciate who she is. She sees that her mother’s memories are both sweet and sour, watercress reminded her of China, but it also brought back memories of being hungry.

The illustrations are exceptional. The tones of yellow and greens shown the beauty of the watercress growing in the ditch surrounded by fields of crops. Jason Chin, the illustrator, draws pictures that show emotions of the Chinese American daughter who is ashamed of her cultural background. She pouts and looks sad. The daughter does not want to try the watercress that her mother has carefully cooked. It reminds her of the free furniture her parents picked up days ago from the side of the road. She is ashamed. The daughter does not understand how hard her mother’s family worked to survive. The pictures of the mother’s family who lived through a famine in China show the warmth they had for each other along with their desperation from hunger.