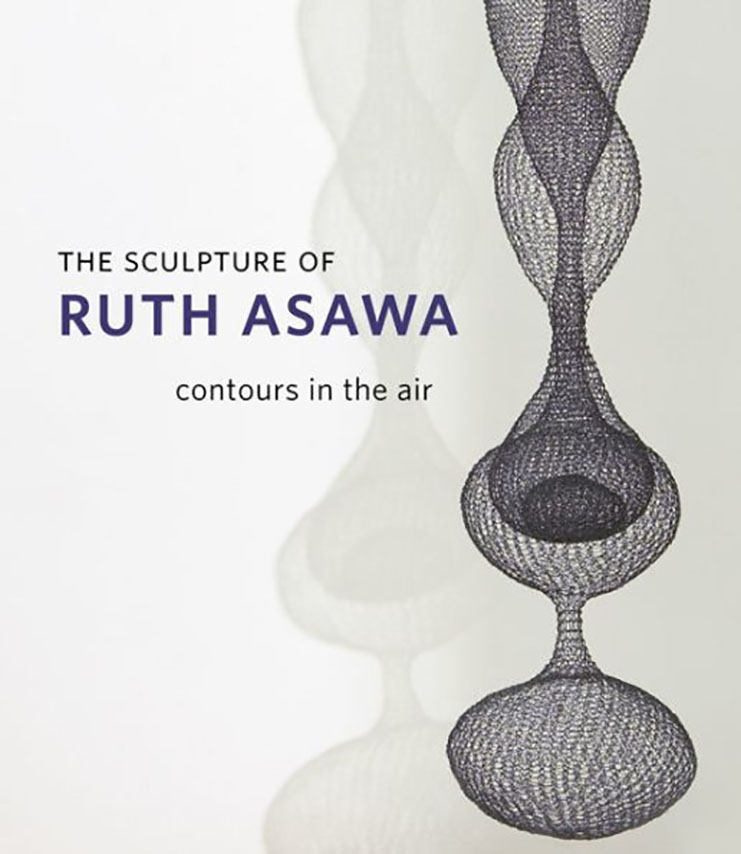 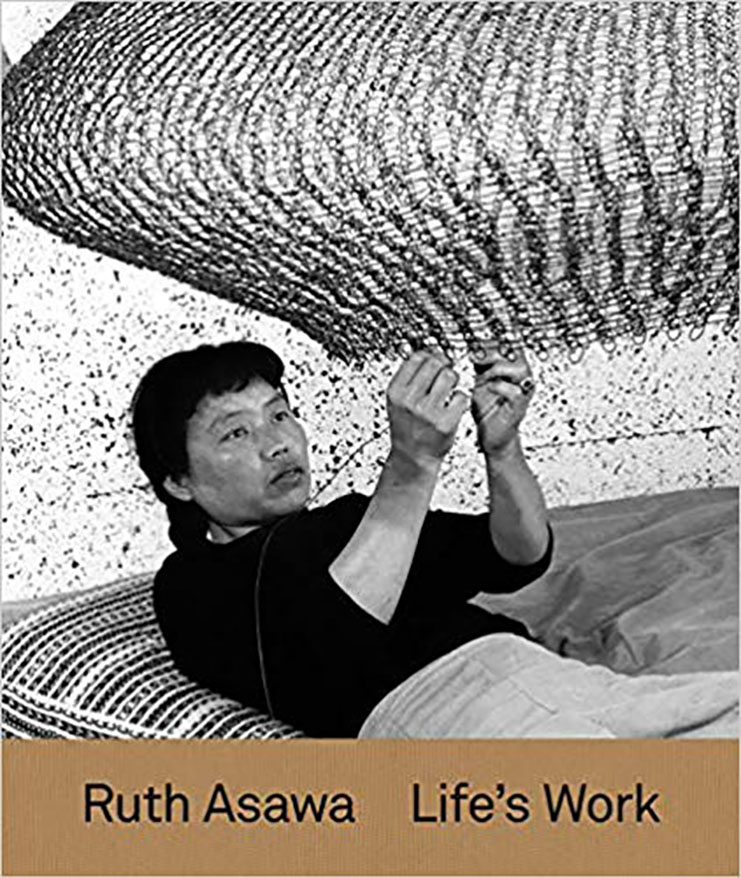 Ruth Asawa (1926-2013) means a lot to the Asian Americans on the West Coast who are aware of her as an artist and a teacher and have grown familiar with her work over the years. Her works are permanently installed at the de Young Museum in San Francisco. Gazing at her hanging, hand-woven wire sculptures provides vibrancy in serenity to museum visitors. Her sensibility may have come from a distant heritage that goes beyond the purity of her aesthetics and/or from a profound and playful exploration of form and texture.

Asawa was raised by Japanese immigrant parents on a farm in California, and she experienced internment first-hand. She was confined in a concentration camp during World War ll. After the war she could not obtain a teacher’s certificate at Milwaukee State Teachers College because of her racial heritage. But then she attended Black Mountain College, in North Carolina, a unique liberal arts college (1933-1957), where she met great teachers, artists and fellow students. Innovation was emphasized. It was there she discovered her own personal and artistic voice. And her continuing search for deeper creativity began. From then on, she delved into and refined her own distinctive artistic oeuvre.

Two catalogues published last year are beautifully designed. Both have essays, plus many reproductions of her artwork. The Zwirner book contains a lengthy biographical chronology filled with photographs, and the Pulitzer book provides an “Evolution of Form,” plus a selected bibliography and index. Highly reputable professionals contributed essays for both books. In the Zwirner book, the contributors are Tiffany Bell and Robert Storr; in the Pulitzer book, Tamara H. Schenkenberg, Helen Molesworth and Aruna D’Souza.

Numerous photos trace Asawa’s life. For example, there is a photo of her with Albert Lanier at the dining hall at Black Mountain College in 1948. Another photo shows them together in their San Francisco home in 1998 where Lanier sits affectionately by her side. While anti-miscegenation laws were finally ruled unconstitutional by The Supreme Court in 1967, California was the first state to remove the ban of interracial marriage in 1948. And Asawa and Lanier married in 1949 in San Francisco. “Bucky” (Buckminster Fuller, who had been their teacher) designed their wedding ring. He was an architect, theorist and inventor who had a cosmic vision of the earth as a spaceship.

The two catalogues stress the significance of Black Mountain College and quote Asawa’s statement: “I experienced for the first time the feeling of being an individual, a minority of one.” She seemed to delicately speak to her own identity of being different from others and she gained the confidence to trust her sense of self. Her studies, under the tutelage of a long-time Bauhaus teacher Josef Albers, was significant. He had accepted an invitation to teach at Black Mountain College in order to escape Nazi Germany with his Jewish wife, Anni Albers, a gifted textile artist. However, Albers initially hesitated because he did not speak any English.

The Bauhaus (1919-1933) was an innovative school in Germany. Teachers there incorporated the idea of the Arts and Crafts movement of William Morris while also introducing the art of radical modernism of that time. Albers’ colleagues at The Bauhaus were Wassily Kandinsky and Paul Klee, who (like Albers) searched for inner communication through color and linear abstraction. The essays in the catalogues describe Josef Albers’ vigorous and innovative teaching methods. Many colorful prints, ink drawings with repeated patterns, potato stamps, stamped patterns and watercolor or oil paintings that Asawa made are reproduced in both catalogues. Asawa maintained her mentorship with Albers until his passing. Albers considered her one of his most promising students (Chronology: 158). She respected him and he had an understanding and appreciation for for this special student with her Japanese American heritage.

Black Mountain College provided much more for Asawa’s development as an artist beyond the classes. In 1947, when she volunteered to teach art in Toluca, Mexico, she got inspiration from local wire baskets there and began to make her own wire works when she returned to Black Mountain College. During the summer of 1948, Asawa met a number of creative artists at Black Mountain College. The dancer Merce Cunningham, who came with John Cage, performed and taught dance and that’s when Asawa discovered her love of dancing. She captured the pleasure of dancing in “Untitled” (Molesworth: 39). The piece conveyed a joy of movement that beyond a mere pictorial exercise. Asawa said: “Working in wire was an outgrowth of my interest in drawing (Bell: 19).” Once she experimented by coloring the wire, but was dissatisfied with the results (Bell: 21).

She continued to experiment with a variety of wire and formations even after she and Lanier moved to San Francisco and raised six children. There are photos of their young children sitting and playing, comfortable in their own world, by her side in the studio while she is working, absorbed in creating her wire sculptures. Many insightful and artful photos were taken of Asawa by her long-time friend, the remarkable photographer Imogen Cunningham, who moved from Seattle to California.

Bell notes the negative responses her shows on the East Coast received (p.21-2). Starting with Time magazine in 1948, and during the 1950s The New York Times, ARTnews, Arts Digest and others covered her work. Also, her work was featured in Vogue and Domus magazines. Then her work was included in Bienale de Sao Paulo (1955), The Whitney Museum of American Art (1955, 1956, 1958) and The Museum of Modern Art, New York (1959). Some critics claimed her works were “domestic” and ultimately dismissed them as decorative objects, and some critics named her “a San Francisco housewife.” She eventually withdrew her works from New York galleries.

Molesworth, who was responsible for one of the definitive books on Black Mountain College (Leap Before You Look, Black Mountain College (Yale & Institute of Contemporary Art/Boston, 2015) writes an essay, entitled “San Francisco Housewife and Mother.” In the essay she spoofs the prejudice against Asawa’s work from feminist viewpoint, but the thrust of the article seems to be not entirely persuasive. Artists with distinct identities have often been misunderstood and/or overlooked. When one reads these catalogues carefully it is clear that Asawa was a confident, accomplished artist who knew what she was doing.

Jacqueline Hoefer’s essay, “Ruth Asawa: A Working Life” and an interview with Asawa and Lanier by Paul Karlstrom are featured in another beautiful and comprehensive catalogue published by Fine Arts Museum of San Francisco. This catalogue intimately captures Asawa’s own voice. For Asawa, San Francisco was a community where she could flourish as an art activist promoting art education for children and where she could arrange for actual artists to teach art at public schools rather than art teachers who were not practicing artists themselves. She also got commissions for public artworks in San Francisco. She stated that she had to withdraw ties with New York galleries due to the burdensome cost and the problems involving payment, but more than these issues was her need for a special physical and mental space where she could establish a base and focus on her creativity.

Robert Storr, who has an impressive and wide-ranging resume in the art world, tackles the deeper meaning of her work in his essay, “Ruth Asawa: Sketches of the Cosmos.” While his essay is written in the language of an accomplished art critic and scholar, his trained instinct reveals his understanding of what lies at the heart of Asawa’s work. Storr writes that Albers brought a cultural cosmopolitanism rare in American schools and taught full concentration on yet-to-be-revealed possibilities inherent in materials and forms”, which was well-suited for “Asawa’s intensely hands-on sensibility.” Storr sees her creative sensitively as the manifestation of the cultural heritage and quotes Amanda Coomaraswamy: “Art is the imitation of Nature in her manner of operation (p. 164).” Coomaraswamy was one of Cage’s Asian philosophical inspirations along with other influences, including The Book of Changes and Zen.

Mary Emma Harris in her essay, “Black Mountain College” in the Fine Arts Museums of San Francisco catalogue, directly quotes from Asawa’s words. Harris is the author of another book on Black Mountain College, The Arts at Black Mountain College (Cambridge, Mass: The MIT Press, 1987, 1988). Asawa experienced deeper understanding of Zen Buddhism through a mathematician, Max Dehn, who was trained in Germany, and Josef Albers, and the writings of Laozi from Albers’ classes (p. 51). Asawa wrote to Albers, “I no longer want to identify myself as a Japanese or American” but a “citizen of the universe.” Harris stresses that Buckminster Fuller’s influence on Asawa also was profound. Asawa understood that Bucky’s whole life was committed to making mankind better (p. 47).

Reading these books, and looking at the work, one realizes how she was inspired by Albers and her Black Mountain College education, her art speaks beyond any boundary. There is this special quality we communicate with in her work that touches upon the fundamental and well-grounded humanity that is woven by the artist’s own hands.

The Sculpture of Ruth Asawa: Contours in the Air by Elsa Urbanelli (UC Press 2006)