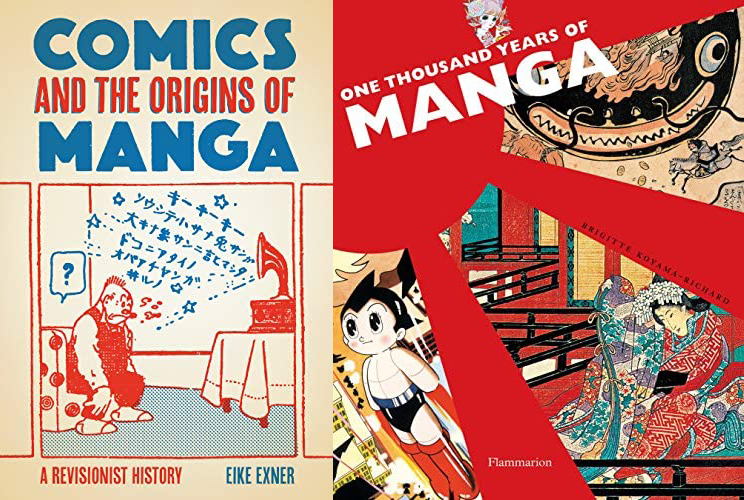 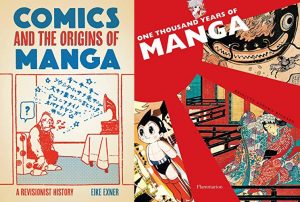 Eike Exner’s Comics and the Origins of Manga: a revisionist history was awarded the prestigious Will Eisner Comic Industry Award in the category of “Best Academic/Scholarly work” at this year’s San Diego Comic-Con. Exner’s book began by asking how Japanese manga and Western comics, supposedly developing in isolation from each other from separate artistic traditions, could have evolved to share the same fundamental formal features. In answering his question, Exner redefines the essential characteristics of what most people think of as “manga” and “comics,” and he rewrites the history of how manga (in the modern understanding of the term) first arose.

The issue of how to define “comics” has been foundational to the development of comics studies. Does the key to this medium lie in how they tell stories through ordered rows of framed pictures or in the particular ways that they combine words and drawings? Exner makes a previously underappreciated aspect of these stories central to his definition: comics and manga use speech balloons to make possible conversations between characters that happen across a series of panels. In both East and West, the rise of such stories had been preceded by works that look very much like modern comics, except that the narration had appeared in captions.

When characters in a comic strip began talking directly with each other, the comics seemed to burst into life and that created a world-wide sensation. Exner argues that this unprecedented cartooning convention had evolved in response to revolutionary, consciousness-transforming new technologies for recording sound and movement, the phonograph and the motion picture (originally, “phenakistoscopes, zoetropes, praxinoscopes, and kinetoscopes.”)

To explain his idea about comics’ defining feature, Exner adopts terminology from film studies. He calls the elements of a comic that would be perceptible to the characters in the story “intradiegetic,” including their bodies, pictured objects and the illustrated details of their settings. The “extradiegetic” elements are those that the characters would not be aware of, such as the panel borders, the title and credit lines, and any captions. Exner proposes the word “transdiegetic” for those visible elements of a comic or manga that the characters in the story would perceive or experience, but not visually. These include things like lines to indicate motion, stars to indicate pain, written sound effects, and especially dialogue in balloons.

Through careful, archival research, Exner identifies the key moments leading to the first “audiovisual” comic strips in which the characters converse with each other. He credits the breakthrough to Rudolf Dirks’ “The Katzenjammer Kids” (published in William Randolph Hearst’s New York Journal), which made several crucial innovations in 1899. Through similar, patient archival research with Japanese sources, Exner has described in close detail how several of the American comic strips were republished in Japan, and eagerly accepted as part of the national project of cultural “modernization.” The first phenomenal “American manga” success was George McManus’s “Bringing Up Father” (republished under the title “Oyaji kyōiku”), which ran from 1923 to 1940.

The huge popularity of the imported comic strips quickly led Japanese editors to encourage Japanese cartoonists to produce this new kind of comic. Within weeks of “Bringing up Father” appearing in Japan, cartoonist Asō Yutaka came up with the popular and influential comic strip “Nonki na tōsan” (“Easygoing Daddy.”) In sum, comics and manga are simply regional variants of a single medium.

The crucial role of imported comic strips had been obscured by a nationalist history of manga which imagined manga as a homegrown Japanese medium, descended ultimately from a humorous 12th century Japanese scroll that showed animals engaged in human activities. This interpretation requires that “manga” be defined vaguely and broadly.

Exner cites as one example of the version of manga history that he rejects Brigitte Koyama-Richards’ One Thousand Years of Manga. Koyama-Richards’ book had been published in 2008, 2012 and 2014, and was republished in a revised and expanded 2022 version soon after Exner’s book appeared. Exner’s book included 60 illustrations, mostly in black and white. The new edition of One Thousand Years of Manga includes 458 illustrations, almost all in color.

More than a captioned picture book, Koyama-Richards presents a detailed history of Japanese visual art that goes back to the seventh century of the common era for what she surprisingly calls “some of the most beautiful examples of caricatures ever discovered.” She continues the story up through the painted scrolls of the 11th and 12th centuries, prints popular in the Edo period (1603-1867), and eventually concludes with examples of the most commercially and critically successful contemporary manga.

By presenting her evidence as illustrations, Koyama-Richard allows the reader to assess whether “profound pictorial similarities seem to exist between manga as we know them today and historical caricatures,” or whether Exner had been more credible when he wrote that such an argument conflates fundamentally different artistic and narrative forms. One Thousand Years of Manga’s strongest illustrated examples for showing a continuing, national artistic lineage juxtapose recent manga with earlier works of Japanese art that they visually quote in parodies and homages, but these do not prove an unbroken tradition. Koyama-Richard reports that some of the Japanese cartoonists she interviewed “readily explained why they looked for inspiration in the culture of the Edo period – or in more remote periods of Japanese history – in choosing subjects for their works” while other Japanese cartoonists were not familiar with that history.

The specific point on which Exner directly challenges the 2014 edition of One Thousand Years of Manga concerns the claim that the ancient scroll often said to be the original manga, the Chōjūgiga jinbutsu giga (known as the Scroll of Frolicking Animals), had included “a supposed example of an early speech balloon.” In the new edition, Koyama-Richard indeed claims to perceive in that scroll “a kind of blank speech bubble.” Exner admits without seeming to recognize it as important to his argument that the disputed lines appear to be “transdiegetic.”

Koyama-Richard does not claim that manga developed in complete isolation, but rather that Japanese art both imported and exported visual ideas. She argues that comic strips like George McManus’s “Bringing up Father” were “created under the influence of Japanese art” and Japanese art “in its turn, was influenced by Western comic books and spawned the manga of today.” (The illustrations supposedly supporting this argument about the reciprocal influence of comics and manga consist of two pages of Hokusai sketches, a recent page of manga clearly inspired by those sketches and a Degas painting.)  Exner agrees that Ukiyo-e prints influenced George McManus and that it would be simplistic to say Americans invented modern comics and Japanese copied them. Exner also agrees that modern manga have been shaped by “the legacy of a rich, long, and variegated tradition of Japanese visual culture.”

Although some have celebrated manga as a Japanese art form and some (especially in the US) have celebrated comics as an American art form, the production and readership of such works cross national borders. Despite their differences in interests and emphases, both Exner and Koyama-Richard would agree that the influences that created comic books and manga have circled and recircled the world. Comics and manga now belong to us all.