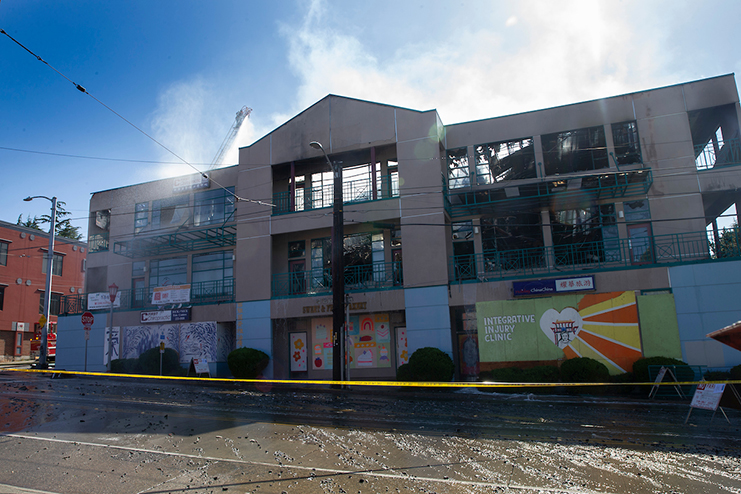 A two-alarm fire at the Eng Suey Sun Plaza in the Chinatown International District on June 25, has left tenants in limbo after major structural damage adds to an already uncertain future caused by Covid-19.

Many rushed to the site at 815 S. Weller Street as news of the blaze broke shortly before 5 am. Smoke could be seen from I-5 and flames leapt out a second story window. A few hours later, clustered behind yellow safety tape, onlookers watched as a fire truck doused sections of the collapsed second and third floors. Seattle firefighters confirmed the building was too dangerous to enter. There were no reported injuries.

“I just talked to my business partner,” said Jo Miller, owner of True Land North Surveying, a tenant for 13 years. “I told her, ‘There’s nothing there. There’s absolutely nothing there.’”

As the morning progressed, Miller watched firefighters work to put the last embers out as her office manager, Tally MacDonald, stood alongside. Miller was visibly anguished about the impact on her 12 employees. Her business, declared essential during the pandemic, had been booming. Everything keeping her up-and-running – computers, billing, backlog list – was lost along with her office on the third floor.

“We felt it was in patients’ best interest to keep as many appointments as possible, even if they couldn’t come into the clinic,” said Koh. “Many have already put off regular exams because of Covid-19.”

The fire created unease among bystanders amid speculation that it may have been linked to a series of recent arsons in South Seattle. David Cuerpo, Seattle Fire Department spokesperson, confirmed investigators are unable to determine the cause and after interviewing witnesses, do not believe it was intentional. The estimated loss is $2.5 million.

Many business owners’ livelihoods had already dwindled, as anti-Asian stigma and COVID-19 fears kept clients and customers away from the CID. Some were just starting to reopen after shuttering for the state’s stay-at-home orders in March. It had already been a tentative road to recovery for the plaza’s 10-plus occupants, many of whom are long-established pillars within the neighborhood.

Kin On’s office for home care and social services, the organization’s second-largest area of service after its nursing home for Asian seniors, had been headquartered at the site for about 20 years. The loss of individual client records and case files, along with a convenient CID location that put staff within the heart of Kin On’s core community, is huge.

“This is yet another devastating blow to our community as many of us are barely surviving this global pandemic,” said Nigel Lo, Kin On CEO. “Nonetheless, I trust that we are far more resilient than we realize, and I am confident that our community will persevere through this setback together.”

Chinese-born martial arts instructor, Tian Yuan Li, worries how she will keep her business going. For about a year, Li has used the now-damaged, low-slung building next door. She had been eager to restart her Kung Fu lessons, even though class size limits would have barely covered her rent and expenses.

Li doesn’t want to move to a different part of the city. “So sad, what am I going to do,” she said. “Find a new place? Where? I just want to keep with my community.”

Fiona Dawn, her brother, and her parents were devastated to hear about the damage to Greenland Inc., a Chinese herbal health drink manufacturer that Dawn’s parents have operated in the Eng Suey Sun Plaza for 28 years. Dawn and her brother are providing emotional support for their mother Winnie Che, a Chinese immigrant from Vietnam, and their father Chris Dawn, a Chinese immigrant from Myanmar. “It’s the only thing we can do,” Fiona Dawn said. “We have to be positive.”

Dawn rushed to the fire on Thursday morning to find a building doused with water, part of the roof collapsed. “It was just really hard to witness it all,” she said. The office contained all the company’s records, forcing Dawn to rebuild business records from scratch. “It’s like literally starting from zero,” she said. Photos of her mother’s work in the community, her 40 years of accomplishments in the U.S., and family photos and antiques were also destroyed in the blaze. After the fire, she strongly believes businesses should “back up everything to the cloud.” Greenland Inc. is in the process of an insurance claim, but it’s not certain what will result, and Dawn worries about businesses that aren’t insured. She feels grateful, though, that no one was hurt. “You start to really understand what’s precious and meaningful to you, and that is to have life,” Dawn said. “Nothing else really matters.”

Dr. Brian Chan and Dr. Michael Chan own the Back and Neck Pain Center acupuncture and chiropractic clinics. Most of the brothers’ patients live outside of the CID and the plaza was already the slowest of four sites to pick up after losing 80% of its business back in March. Despite the challenges, they remain committed to the neighborhood.

“We don’t want to leave the community,” said Brian Chan. “My mom is Nora Chan and she’s pretty important here in the community. She does a lot of community activist work and her and my dad set up this office here and they’ve been in the community for 30 years.”

The Chans were among the original tenants when the plaza opened in 1989. They shared the ground floor with the now charred Sweet and Fresh Bakery.

“It’s part of our heritage,” said Chan. “We have to figure out where we go from here.”

Photography for this project by Karen Ducey is supported by 4Culture Cultural Relief Fund.