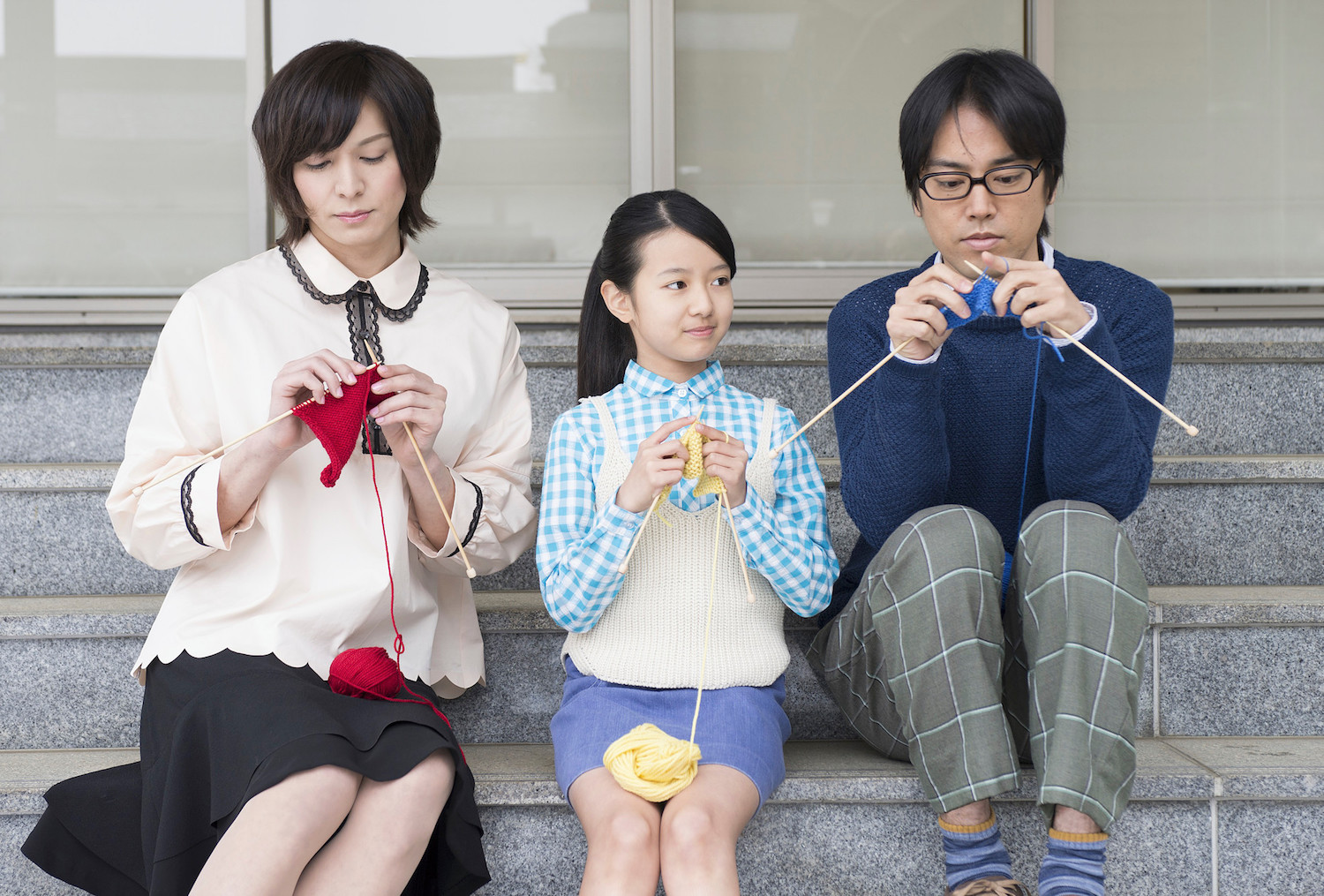 From Japan, comes Close-Knit, a tender, tear-jerking tale about a contemporary blended family. When Tomo-chan’s mother abandons her, leaving behind just a package of onigiri (a store-bought rice ball), the girl seeks the help of her uncle Makio, a bookstore cashier. Bringing his niece home, Makio introduces her to his lover, Rinko (Toma Ikuta), a transgender caregiver who knits whenever she’s upset. Soon, Rinko is fussing over the 11-year-old, gently brushing her hair and carving a tiny octopus from a small sausage for her bento (lunchbox). But Tomo-chan (Rinka Kakihara) is a bit unnerved by Rinko’s breast implants, and she still yearns for her own mother. Slowly, she warms up to Rinko as she learns to knit along with her for what will become 108 symbols of liberation for Rinko. In Buddhist teachings, there are 108 sufferings of humankind. Meanwhile, a classmate of Tomo-chan’s comes to terms with his homosexuality even as his mother rejects it with disastrous results. Kakihara as Tomo-chan is brilliantly charming as is Ikuta as Rinko, even though the ill-fitting wig is distracting. Director Naoko Ogigami makes clever use of Japanese metaphors like floating cherry blossoms in this remarkable feature narrative. (Japanese with English subtitles)

In the riveting documentary Small Talk, Taiwanese director Hui-Chen Huang sets up cameras inside her house to examine her lesbian mother, Anu, up-close and personal. Often sitting opposite Anu, Hui-Chen pokes, probes and prods for answers. Concerned about her future relationship with her toddler daughter, Ping, Hui-Chen has endless questions—“Did Anu ever love her and her sister?” “Why did she spend more time with her girlfriends than her daughters?” Anu’s brusque answers are often brutally frank whenever she chooses to respond, which is not always. As Hui-Chen uncovers painful secrets like the savage abuse her father heaped on them all, she finds more questions to ask. Through countless silent meals, treks to the house that Anu grew up in, and at gatherings with Anu’s siblings, Hui-Chen seeks answers for the wall her mother has built between them. Even her memories of colorful ceremonies they performed together as a Soul Guiding Troupe at funerals, ushering the deceased toward salvation, can’t alleviate Hui-Chen’s emptiness as Anu directs her more than once to “stop filming.” (Taiwanese (Min Nan) with English subtitles)

On the other hand, in the documentary Abu (which means father in Urdu), it is son Arshad Khan who is gay and seeking his father’s approval. Told through animation, old home videos and vintage family photos, the film chronicles one Pakistani family’s diaspora. During the British partition, the Khan’s left Punjab India for Lahore and, later, Islamabad Pakistan. As an engineer, Abu was able to provide a middle-class lifestyle for his family and they enjoyed lively get-togethers with extended family and friends. But when the economy began failing and politics grew violent, Abu moved his family to Canada.There, Arshad continued exploring his burgeoning need to connect to his closeted homosexual feelings. But as Arshad grows more open in a Western environment, both his father and mother become ultra-conservative Muslims unable to accept their son’s gay lifestyle. (English, Punjabi, Urdu with English subtitles)

Another captivating documentary, also from Pakistan, is Girl Unbound: The War to Be Her. In this tense tale, Maria Toorpakai, a Pakistani athlete happily veers between her male and female sides. After discovering her natural abilities at the game of squash, she began dressing as a boy so she could play freely under the watchful eyes of the Taliban which banned girls from all sports. Growing up in the Waziristan region, the Federally Administrated Tribal Areas, Maria is aware of how dangerous it is for her to defy the laws and travel around the world winning championships. But in spite of the menacing threats her father receives, he continues to encourage Maria to play and her sister, Ayesha, to enter politics. (English, Urdu with English subtitles)

Signature Move is feature-length, rom-com narrative with culture-crossing characters. When Zaynab, an unmarried Pakistani lawyer, meets Alma, a Mexican Jewish bookstore owner, it is not love at first sight. Instead, the two women drink too much and end up in compromising positions. Zaynab lives with her widowed mother, who has binoculars permanently attached to her neck to spy on potential husbands in the neighborhood for her in-the-closet lesbian daughter. As she surveils, she obsessively watches Pakistani soap operas. In order to de-stress, Zaynab takes up wrestling. Unbeknownst to her, Alma’s Mexican mother was once a professional wrestler. With her cropped hair and leather motorcycle attire, Zaynab looks a lot tougher than she is, and discovers that love is something she can’t wrestle away. (English, Urdu, Spanish with English subtitles)

A feature narrative from Thailand, Fathers is about a boy with two fathers and who wants to know the mother he’s never met. Butr (Sinjai Plengpanich) is like any other kid his age until his fellow classmates begin bullying him for being motherless. His two fathers do their best to help him understand their relationship and why his birth mother put him up for adoption. But an official reliving her own haunted past decides to interfere. Soon, the previously unknown mother enters the picture and the two fathers exit. (Thai with English subtitles)