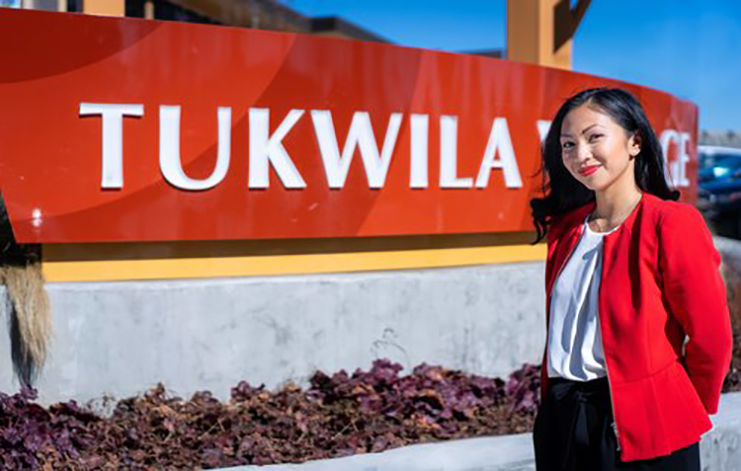 Celeste and Eduardo Delostrinos left behind their large, close-knit Filipinx family in 1984 to start life anew in the United States. With their two daughters, they settled into a home in West Seattle. Celeste, a law graduate from the University of the Philippines, accepted a job as a secretary at a law firm while Eduardo, who held a master’s degree in political science, became a truck driver. Within the next six years, Celeste and Eduardo welcomed three more daughters into their lives. Today, Celeste and Eduardo’s fourth child, Cynthia Delostrinos Johnson, is running for a seat on the Tukwila City Council. She’s poised to become the first woman of color and first Asian/Pacific Islander to serve public office in the city.

Delostrinos Johnson’s decision to run for city council was inspired partly by her upbringing. Raised within the public-school system, she attended Fairmount Park Elementary, Denny Middle School, and Garfield High School. While in her junior year of high school, she took “Minorities in America,” a class focused on the history of people of color in the United States. She was struck by Thurgood Marshall’s work to create equity and fight injustice in Brown v. Board of Education and decided her path would follow a similar route.

After receiving her law degree from Seattle University, Delostrinos Johnson accepted a position as a court program analyst with the Washington State Minority and Justice Commission. She organized educational seminars on racial and ethnic bias, language access, and jury diversity and received grants from the Department of Justice to address issues related to legal financial obligation. Eventually, she was promoted to administrative manager of the Supreme Court Commissions with the Washington State Administrative Office of the Courts.

In 2013, she and her husband, James Johnson, a fellow graduate of Seattle University School of Law, moved to Tukwila with their one-year old son Isaac to build a home of their own.

“Tukwila is such a beautifully diverse community,” she says. “I’ve loved the city since I moved here, and I haven’t looked back since.”

Her first foray into political advocacy was during longtime Tukwila City Council member De’Sean Quinn’s mayoral run in 2015. “I remember she was so nervous to go out and knock on doors with me,” recalls Quinn, who endorsed Delostrinos Johnson’s campaign. “It threw me off because she is so well spoken and confident.”

Delostrinos Johnson’s nerves quickly disappeared, and friends soon began encouraging her to launch her own campaign for public office—but the decision wasn’t an easy one to make. She was working full time, a mom to two young sons, and was commuting to Olympia almost every day. Seeing the record number of young women of color running for office across the country in the last few years solidified her decision, however.

“I realized my voice has something to offer Tukwila,” she says. “If I really want to make change, I need to bring the skills I have to the community where my kids are growing up.”

On March 21, exactly a year after the passing of her grandmother, Delostrinos Johnson announced her run for Position 4 on Tukwila City Council. “This is real,” she recalls thinking. “I’m doing this.” On a sunny May 11 afternoon at the Sullivan Center in Tukwila Village, she kicked off her campaign with 50 of her closest family and friends.

For the next six months, Delostrinos Johnson and her small campaign staff— campaign consulting firm CD Strategic, interns Khang Nguyen, Anson Huang, and Jarmaine Santos, and campaign manager and cheerleader affectionately referred to as “Pogi”—have knocked on over 2,000 doors, held fundraisers, and sent out mailers.

The primary focus of her campaign so far has been the upcoming justice center that is set to open in Tukwila next fall. With her experience in promoting equity, she considers herself the ideal candidate to oversee its opening. She wants to make sure it becomes a place that is, “welcoming, inviting, culturally responsive, and meets the needs of the people in a multicultural, multi-generational community.” Her other priorities include building more affordable housing and fixing the city’s deteriorating sidewalk infrastructure.

With the election right around the corner, Delostrinos Johnson is giving her campaign one final push. No Filipinx American is currently serving public office in the state of Washington and no woman of color has ever served in Tukwila. As she continues to get out the vote and share her message, she’s doing all she can to set a precedent for future generations.

“Being visible and able to represent the Filipino community is really important to me,” she says. “I may be the first, but I definitely won’t be the last.”