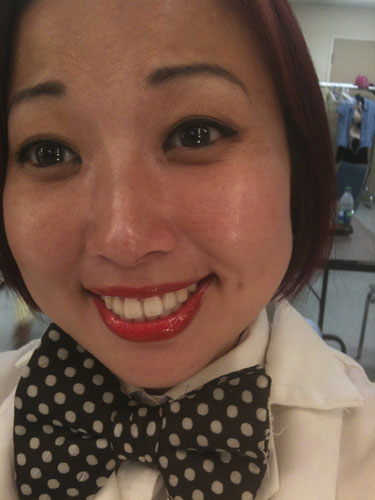 Clowns have long brought humor to sad situations, to help us cope with tragedy and sorrow. Local clown and performer Sachie Mikawa continues in that vein, and has just received a GAP Grant from Artist Trust to support her new work.

Mikawa began her clowning with a 12-week course with George Lewis, who is cofounder of Freehold Theatre Studio and an instructor in the art of the Personal Clown. Lewis then served as director for Mikawa’s first original show, a short solo clown act called “Birthday Surprise.”

This introductory show taught Mikawa a lot about clowning.

“I realized pretty quickly that half the work was really done by the audience,” Mikawa said. “I would react to how they reacted to what happened on stage (or what happened to me), and it was funny to them even though I’d be either struggling or crying or doing some other tragic routine.”

“I haven’t seen many clown acts like that in Seattle where the clown is aware of the audience and think it’d be fun thing for me to explore in the new show,” Mikawa said.

Mikawa is still in the early stages of development of her new clown piece, which focuses on stories about her mother’s hometown and youth.

“The Japan earthquake and tsunami in 2011 was obviously the main event that put ideas into my head,” Mikawa said.

Mikawa’s mother’s hometown was destroyed, but her mother and aunt survived.

“My mom and sister lost everything in the tsunami as they lived right by the sea south of Sendai,” Mikawa said.

A key inspiration for this new piece is, according to Mikawa, “that surreal moment you find out your mom and sister are alive after being certain for two days that they were dead.”

Mikawa said that moment had a strong impact on her.

“I’ve always had strong connection to that place and mom’s side of family,” she said. “It made me spend less time caring about what’s not important.”

Instead, Mikawa has been sorting through memories and mementos of her past life in Sendai City, Japan.

“I moved to Seattle from Japan in the spring of 1998,” she said. “It was a Friday the 13th, full moon, and on ‘butsumetsu,’ which is regarded as a ‘not good’ day of the week in Japanese calendar. It was all set for tragedy so I had to pick that date.”

“It was one of my dreams to move out of Japan, since I was five or so, so it felt fantastic and I’ve never felt homesick, not even once, ever since,” Mikawa said.

But the tsunami’s effects changed things: “Years earlier, I stole many of mom’s photos from home,” Mikawa admits. “I think I was just shy to tell her that I wanted my baby photos with my dad, since he disappeared fifteen years ago and has not been in contact. But I also took many more.”

This allowed Mikawa and her mother to experience a poignant moment.

“She [Mikawa’s mother] thought she had lost all her photos in the tsunami until I told her I had ‘saved’ some for her,” said Mikawa. “It definitely made her day that day.”

From these moments, Mikawa plans to create a solo performance set in Sendai City in 1959, focusing on her mother at age ten.

“I like that the clown is true to herself, whatever she believes is the absolute truth to her,” Mikawa said. “But I also think that’s how people are. That’s how habit and beliefs are made.”

Mikawa will explore the Sendai City of her mother’s childhood, before the area was destroyed.

“One of my clown characteristics is innocence,” she said. “Anyone who knows me knows that I’m far from being innocent, but I feel very playful when I get to be innocent while clowning. And I like the sense of play and joy.”

She is also exploring options for taking this new performance to Japan and elsewhere.

“For the past couple of years, I have been more interested in making shows that I can take to wherever I wanted to go,” Mikawa said.

That includes her country of birth.

“I went home for the first time in eleven years just last week,” Mikawa said. “I would love to perform in Japan.”

Mikawa hopes to make connections with her spectators despite any cultural or linguistic gaps.

“I enjoy the feeling of the audience being my scene partner while performing my solo clown act,” Mikawa said. “The show will be somewhat bilingual, so it’d be interesting to try.“

Until then, Mikawa will be developing this new solo piece and continuing her work with LeFrenchword, a local performance troupe she cofounded with three other performers. Mikawa and Le Frenchword will perform their newest original show “Fancy Mud” in Seattle in July 2014, and then tour the show to nearby fringe festivals and West Coast cities.