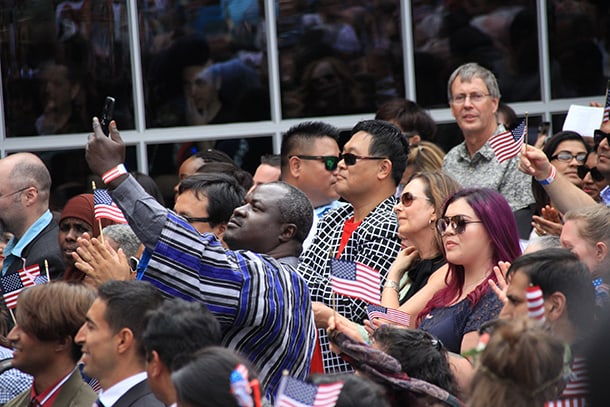 Angela, a 45-year-old single mom who lives in Bellevue with her sister and two teenage children, worries about the possibility that she may not be able to renew her green card. That’s because she received medical care while she was on Medicaid.

Angela is originally from China, but moved to Australia about 20 years ago. She has been a U.S. green card holder for 10 years. She has applied for citizenship for herself and her daughter.

Last week, proposed regulations were published in the federal register, broadening the criteria by which authorities may deny permanent resident status to immigrants who use federally-funded services like Medicaid, housing support, food stamps and Medicare prescription subsidies.

Although the changes would not be applied retroactively, many immigrants like Angela fear their past enrollment in public programs, even those currently exempted by the draft regulation, could be held against them.

“If something happens, next year will be my last year in America,” she said. “Now I keep watching, looking at the news. My kids are used to living here. They are used to the schools and education here. My family is all here.”

Like Angela, many immigrants in the U.S. support themselves and their families through low-wage jobs without health insurance and depend on Medicaid, housing subsidies or food stamps to help feed their families.

Critics say the proposed rules constitute an attack on the most vulnerable members of society and risk a public health crisis with costly ramifications for the nation’s low-income immigrant population.

Jeffrey Caballero, executive director of the Association of Asian Pacific Community Health Organizations, said, “If the proposed regulation goes through, families would be forced to choose between going to the doctor and other basic needs, and keeping their loved ones together. As an organization representing health centers that serve all communities, this proposed rule is detrimental to the health and well-being of the communities we serve.”

The new proposal also outlines other factors that could make it easier for immigrants to be deemed “public charges,” such as not having a college education, speaking English with limited proficiency or simply being under age 18 or over age 62.

Diane Narasaki, director of Asian Counseling and Referral Service (ACRS), called the proposal “insidious.” She noted that ACRS programs reach over 35,000 patients every year, a majority of whom are immigrants and refugees.

“In addition to its direct impact, the confusion that accompanied the rollout of this proposal has caused people to dis-enroll from programs or refrain from using services,” she said. “There’s a wider future implication, too. Asian Pacific Islanders are the fastest growing racial group in the U.S. A significant number come through family-based immigration. The proposal would prioritize only those who have wealth.”

Like Narasaki, Dr. Asqual Getaneh, medical director at International Community Health Services (ICHS), pointed to the potential widespread impact on immigrant families. She noted that approximately 17,000 of ICHS’s 30,800 patients receive Medicaid. Over 80 percent of them are people of color and 55 percent need interpretation services.

“We have already seen the chilling effects of this proposal,” she said. “Out of fear that they might be rejected out of this country, some patients have come to us, asking to be dis-enrolled from benefits to which they are legally entitled.”

The new rules were published on October 10. They will not be finalized until the public has a chance to file comments during a 60-day review period ending December 10.

“We call on the administration to rescind this proposal,” Caballero said. “We urge the public to join us in taking action by submitting comments and opposing this harmful public charge proposal.”

Both ACRS and ICHS are spearheading a state-wide effort to gather 4,000 public comments. This effort is part of a larger organizing effort by Protecting Immigrant Families to amass over 100,000 unique comments. ACRS and ICHS have each set a goal of 100.

“We are now educating our staff about the importance of this issue so that they can better inform our patients in their own language,” said Sunshine Monastrial, ICHS planning, development and evaluation manager. “We want them to have a voice and weigh in on how these changes will impact them.”

Joseph Lachman, civic engagement program manager for ACRS, is one of those leading the state-wide effort. He pointed out that he is a descendant of Japanese Americans who were incarcerated during World War II. “Knowing the struggles my ancestors went through to be in this country, I want to make sure that no one ever has to choose between a green card and taking care of their loved ones,” he said.

For now, Angela and other immigrants wait with their future hanging in the balance. “Right now the government is trying to divide Americans into two groups of people,” she said. “This policy is so divided. I am not that kind of extreme person. I am in the middle.”