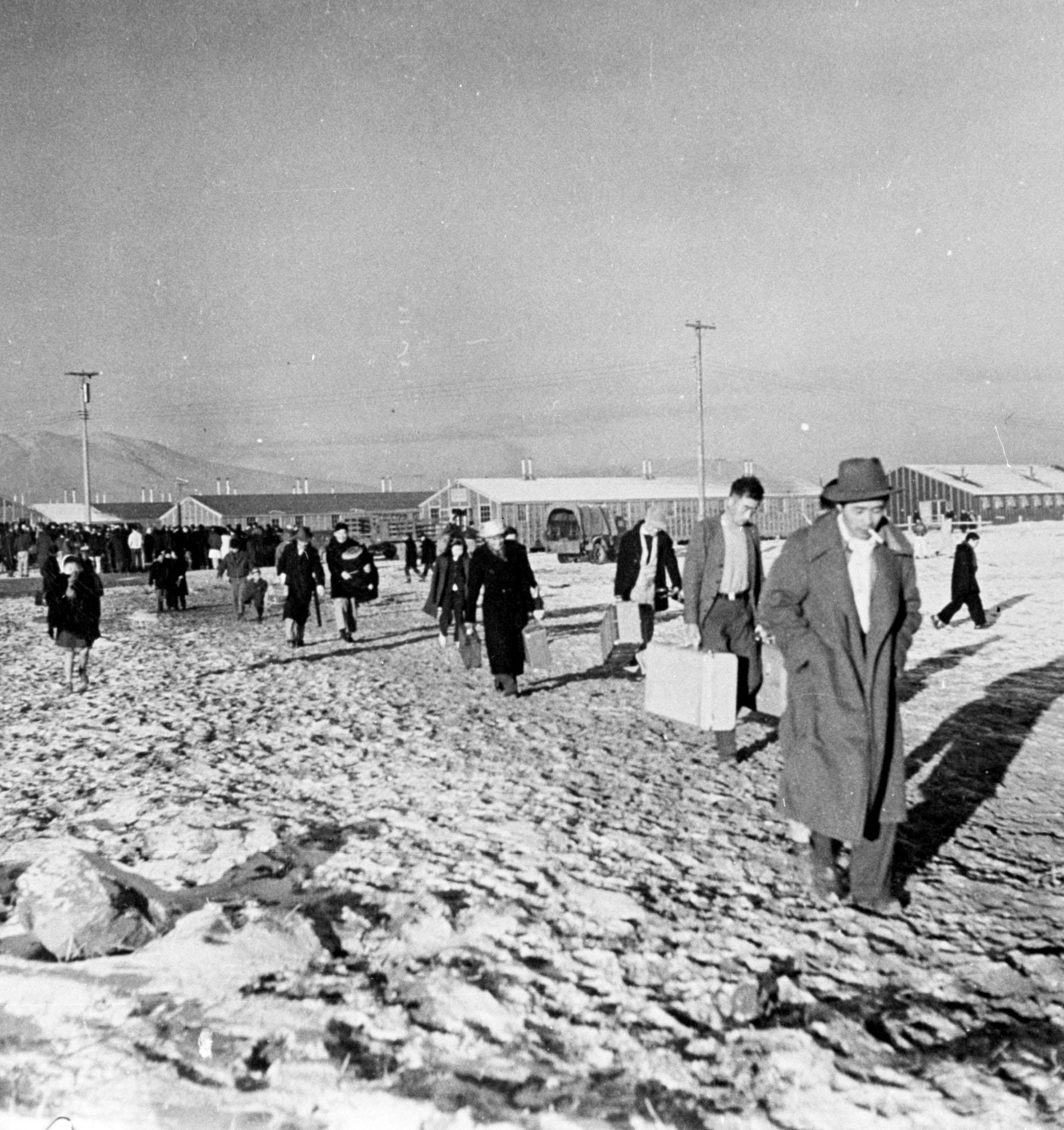 Since 2006, the federal government has paid millions through a grant to preserve the sites where Japanese Americans were incarcerated during WWII, to research the history of this incarceration, and educate people.

President Trump’s 2019 budget proposal omits the JACS Grant Program from the federal budget. It would dissolve the $17 million in remaining funding. U.S. House subcommittees have until March 16 to submit their recommendations, and address the omission.

Losing this funding would be a blow to preserving vital Japanese American WWII history, advocates say–history with urgent messages for today.

When it started, the JACS Grant Program was a “complete game-changer,” said Brian Liesinger, coordinator of the All Camps Consortium of organizations around the country that preserve Japanese American confinement sites. “It really changed the landscape of how we tell this history.”

In 1942, after the attack on Pearl Harbor, President Roosevelt signed Executive Order 9066, which authorized the military to round up people of Japanese descent living on the west coast for imprisonment. Between 110,000 and 120,000 Japanese and Japanese Americans, two-thirds of them U.S. citizens, were forcibly removed from where they were living and brought to concentration camps, usually situated in inhospitable landscapes in the interior of the country.

“Confinement Sites” is an umbrella term for the places where Japanese Americans were held. It can refer to temporary assembly centers–like the Puyallup Fairgrounds in Washington–where people were held before being transported elsewhere. Other confinement sites include the 10 concentration or prison camps where most citizens were held, surrounded by barbed wire and guard towers; the internment camps for Japanese nationals; and various prisons.

From 2009 to 2017, the JACS grant has given $21 million to help fund some 185 projects in 20 states and Washington, D.C. Recipients of the grant in Washington state in 2017 were Densho, the Bainbridge Island Japanese American Exclusion Memorial Association, and the Wing Luke Museum.

Singling out the JACS Grant Program for omission from the budget was a surprise, said Barbara Takei, a civil rights activist and CFO of the nonprofit Tule Lake Committee, especially because “it’s a grain of sand in the federal budget.”

Takei’s nonprofit works to preserve the Tule Lake concentration camp site in inland California, where her mother and family were sent. It’s also the place where Star Trek actor George Takei (no relation) grew up. Barbara Takei has spent a decade researching the history of Tule Lake.

“Tule Lake is the most important civil rights site of the Japanese American incarceration,” she said. “The Tule Lake jail is the iconic structure symbolizing what the mass incarceration was all about.” The jail was a prison within the prison of the concentration camp, where thousands of people were sent for being “disloyal” and resisting violations of their civil rights. A modest JACS grant of $330,000 dollars allowed the Tule Lake Committee to work on preserving the jail.

Losing the JACS grant would be a “a tremendous loss, because the burden of preserving our own history would fall back on our own community’s resources,” Takei said. “And of course, our community was stripped of resources for two generations…. If you’re not rich and you’re not powerful, your resources are very limited for preserving your own history.”

Some confinement sites need a lot of work and others need less, but even the most developed sites might lack a visitor’s center, said Liesinger, who was previously executive director of Heart Mountain Wyoming Foundation, overseeing the preservation of the Wyoming concentration camp. A JACS grant provided over $800,000 to build a new museum on the site. For many confinement sites the JACS grant funding has been crucial.

“Some of these projects, they just wouldn’t have happened,” Liesinger said. “They’re great ideas, but if someone were to try to come up with those dollars on their own?”

Even though the JACS program has funded 180 projects, said Liesinger, there are countless “other ideas that haven’t really had a chance to really be brought to full justice.”

According to Joseph Lachman, president of the Seattle Japanese American Citizens League, the JACS funding is more important than ever. “We’re also losing so many of the Japanese American elders who remember these experiences,” he said. And in the era of Trump, he said, it’s valuable for people visiting the sites to “see a broader narrative and realize how forced relocation and incarceration of immigrants, indigenous population, minority communities– those can be tools of white supremacy, of systemic oppression.”

Visiting the sites is a deeply meaningful experience for many Japanese Americans whose families were incarcerated there, including Lachman, who said it helped him connect to his identity and “[understand] what kind of multi-generational trauma I’ve inherited because of my family.”

For Tamiko Nimura, a Tacoma-based writer (and regular contributor to the International Examiner), visiting Tule Lake where her father was incarcerated was a “transformative experience.”

“I had been reading about, writing about the history and my family’s connection to it for years,” she said, “but nothing could have prepared me for actually arriving there – to actually stand in all of these spots, to feel the summer heat, to see just how desolate that valley felt and to feel that connection quite physically.”

For the Japanese American community, the preservation of the sites has been an opportunity to heal, according to Satsuki Ina, a psychotherapist, professor and documentary filmmaker, who was born in 1944 at Tule Lake camp, where her parents were incarcerated. She has studied and explored in film the effects of incarceration on the mental health of Japanese American families.

“People like my parents never spoke about their experience, they were so traumatized by it and humiliated by it, and also didn’t want to burden their children with all the deeply-buried feelings about what happened to them,” Ina said. “Having these sites preserved and the stories gathered and graphic novels made, it has just created this huge opportunity for people to express the trauma, to write about it, to tell about it, to interview people who were incarcerated. It’s been a powerful healing for our community to be able to do that.”

And it has powerful symbolism. “It’s like the government put their money where their mouth is,” she said. “I think there was this level of trust that came back.” But now, “with the funds being cut, it feels pretty deep, like being abandoned again, halfway through this process.”

Having physical sites in place is an irreplaceable way to teach the American public this history, said Larry Matsuda, a Seattle educator and poet born in Camp Minidoka in 1945. “The farther you go east, the less the people are aware of what happened, and to them they can’t believe it,” he said. “I’ve talked to people in the Midwest, and they’re just kind of shocked that it actually did happen…. I would tell them, ‘Go visit the site.’”

Though he only has second-hand memories of life in the camp, Matsuda’s poetry is deeply informed by the Japanese American experience of incarceration. Matsuda also wrote a graphic novel in collaboration with Seattle’s Nisei Veterans Committee and The Wing Luke Museum, funded by the JACS program, about six Nisei veterans who experienced combat in WWII and incarceration in U.S. concentration camps.

“By sharing the message of the forced incarceration with others, they then cannot be ignorant,” Matsuda said. “They then have a piece of the Japanese American legacy. And when it happens again, they then cannot say, ‘I never heard of this.’”

Nimura is also writing a graphic novel in collaboration with the Wing Luke Museum, this one about people who resisted Japanese American incarceration. The project is funded with the help of the JACS grant. She remembered being dismayed to see a Washington state middle school sociology textbook claim that Japanese Americans never resisted incarceration, when she’s writing a graphic novel about exactly this subject.

Ina agrees that the sites can teach lessons Americans can’t afford to ignore: “This happened to us, and the language that’s being used today is very similar to what ultimately led to our incarceration,” she said. “If the story of the Japanese Americans could be taught in the schools and public places where people could come and visit and see for themselves, it will educate people to keep it from happening again, to realize that we’re edging towards another dangerous violation of civil rights.”