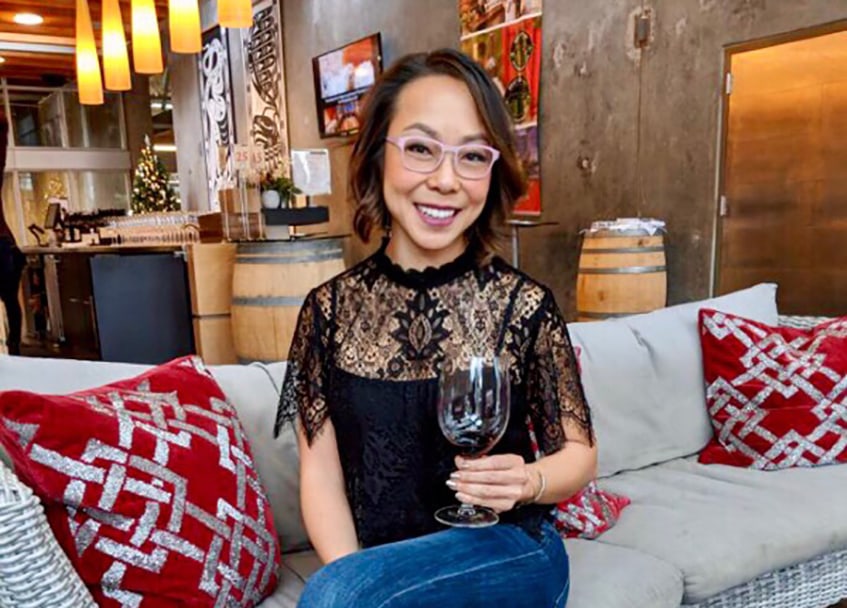 Angela Shen has blazed a trail into the hearts of food-loving tourists and locals by bringing them behind the closed doors of over 40 of Seattle’s best restaurants and hot spots. I meet up with Shen, the founder and CEO of Savor Seattle Food Tours, and she is clad in pink accessories as she approaches the doors of Woodinville’s ultra-modern Novelty Hill Januik Winery. Shen is delighted to learn that I’ve been on three food tours in the past, including Booze n’ Bites, one that includes cocktails.

We’re together to discuss the company’s 2018 launch of three self-guided tasting passports, which make thoughtful holiday gifts and are bargains by any standard. The digital passports, centered around wine, food, and beer, live under the Savor Seattle mobile app.

The Seattle Wine Passport, which rolled out in July, costs $59.99 for tastings at 10 user-selected locations in Woodinville, SoDo and Pioneer Square. It is packaged with $50 of Lyft credits. “A wine-hopping weekend in Woodinville and around Seattle can be hard to coordinate,” Shen says. “We partnered with Lyft to be your hip designated driver in your pocket.”

The curation aspect is key to what differentiates Savor Seattle’s app from the printed Woodinville Wine Passport. “Choice can be overwhelming,” Shen says. “So we offer a curated set of 25 wineries that people can try over the course of the year at their own pace.” This is in contrast to the over 60 wineries that users with the print passport can try within three weeks.

In October, Savor Seattle released the Seattle Food Passport, which operates on a similar premise – total flexibility to choose 10 restaurants and bakeries from which to sample pre-selected dishes out of 20+ total on your own schedule, within a year of purchase, for $39.99. On December 15, Savor Seattle expanded to Portland with a self-guided brewery tasting app called Portland Passport On Tap. Shen is eyeing our neighbor to the north, Canada, for future expansion plans.

Shen caught the entrepreneur bug from her parents, who moved to Hopkins, Minnesota, when she was four. They had heard the Midwest was open space for Chinese establishments, and after their move, the Shen family opened the first Chinese restaurant in Minneapolis. Shen and her brother, who was born in Minnesota, were the only minority students at their schools.

Shen created her first businesses on reuse-and-recycle concepts. In second grade, she fashioned Chinese jump ropes out of rubberbands from green onion bundles in the restaurant kitchen and sold them on the playground. In eighth grade, she cut out fragrance cards found in magazines and re-designed them into stationery for sale. In college at the University of Pennsylvania, she made her dorm room a shipping facility for eBay.

Growing up, Shen’s jobs included working inside the kitchen and the front of the restaurant, and in different formats ranging from the sit-down, large restaurant, to take-out places, to what eventually became very popular – the Chinese buffet. As a food industry veteran, she knows the customer experience at a very intimate level. Her mother practiced an early form of customer relationship management. “When I left for college, my mom literally pulled a book out of a drawer and showed me. She had written down the names of her customers’ pets and kids throughout the years,” Shen said.

After Wharton, she missed exercising her entrepreneurial chops when she worked in brand management at Quaker Oats. She considered buying and flipping houses, but that felt too transactional for her; she missed the connection piece that she enjoyed from growing up around customers in the food industry.

Eventually Shen realized, “Everyone speaks food – it’s the connection with people behind the door that resonates with a lot of people. When you know the chef’s story, his burger is going to taste a lot different than the ones at Dick’s Drive-In.”

After moving to Seattle in 2006 from Chicago, Shen decided to return to her entrepreneurial roots by paying homage to this consumer insight. To lay the groundwork for Savor Seattle, she reached out to acclaimed local chef Tom Douglas, whose restaurants are on all of her Seattle tours — Etta’s was actually the first.

Douglas continues to be an inspiration and friend. Shen recalls that during Snowpocalypse 2011, she saw him icing salt on the ground in front of Dahlia Lounge. His comment, “Someone’s got to do it,” sticks with her to this day.

Shen herself has worked tirelessly to build up her company and now leads 25 employees. Agents of the Seattle area have blessed her path to success. International travel writer Rick Steves and his family went on the first Capitol Hill tour, and since then, over 4,000 people have favorably reviewed the tours online. Savor Seattle has an average 5-star rating on Yelp.

The entrepreneur life has involved great sacrifice. Shen currently sees her children only two nights a week, but she feels at peace with the lifestyle choices that work best for the family. She shared how a health scare involving a temporary loss of hearing led to her re-evaluating her priorities and drove her to pursue fitness goals and a more balanced schedule. Today, she feels confident that she is showing up and doing her best, which allows her to be a “spark for others.”

She’s also been inspired by the research of Brene Brown on vulnerability and authenticity and credits a Harvard Business Review book called “Heart, Guts, Smarts, and Luck,” which addresses the four attributes of successful entrepreneurship. Shen was encouraged by the book to know her strengths and weaknesses, then hire the people to fill in the gaps. Today, Shen enjoys public speaking and sharing her passions about innovation with other entrepreneurs and women leaders.

Last month, Shen’s accomplishments in developing the wildly successful food tour company – whose praises have been sung by Bon Appetit and Sunset – earned her a 2018 Women of Color Achievement Award, an honor bestowed by 100 Black Men of Seattle, Inc. and the Women Presidents’ Organization. With Shen’s accolades including 2017 Seafair Queen and Puget Sound Business Journal’s 40 Under 40, the world looks forward to seeing what she does next.