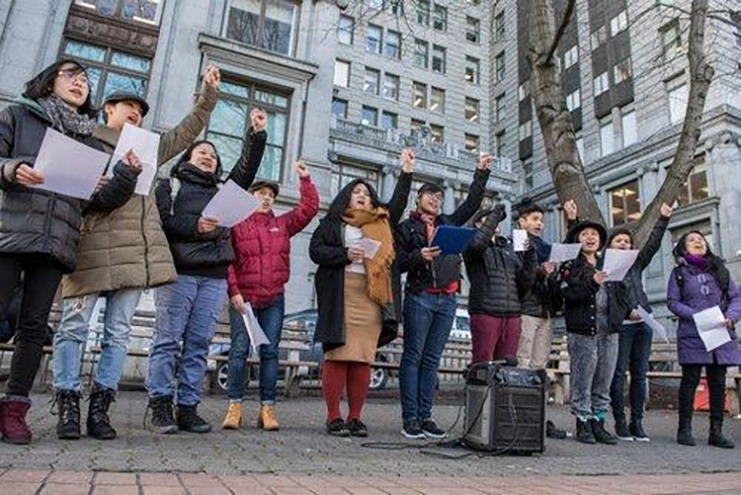 With the lifting of mask and vaccination requirements in Washington state this month, API Chaya is looking forward to helping survivors with more in-person assistance.

Lori Penor, the survivor advocate of API Chaya, said language barrier, fear of sharing and lack of knowledge of resources are some reasons why many survivors stepped back from seeking help in the first place.

“People are isolated, particularly in the pandemic,” she said. “There needs to be more support in breaking down some of those barriers, so that people feel more comfortable seeking help.”

Penor has worked with a few trafficking survivors. And during the pandemic, these survivors have made Seattle their home. It has been difficult for them to be involved with the local community since everything has been shut down. Being the first person they’ve met in Seattle, Penor has helped them with finding jobs, housing, vaccination and navigating the system about their trafficking case.

She criticized the difficulty to access the state’s online resources when everything has gone remote, especially for survivors who don’t have access to all the various technologies.

“A lot of people we’ve worked with do not have a laptop,” she said. “Maybe you should not assume everybody has access to the internet, right?”

Penor also said that she has received more calls during the pandemic from people who experienced hate crime violence.

The Seattle Police Department released a report in February 2022, revealing the number of aggravated assaults rose 24% from 2,656 to 3,595 cases in the past two years. The violent crime rate reached a 14-year high in 2021.

While API Chaya serves a wide range of communities, they have specific advocates who are bilingual. Penor believes having someone to be able to communicate with survivors in their first language is vital, especially when they are experiencing a crisis and need immediate support.

But when harm happens in the community, supporting tools are not the only thing that should be offered. Penor said these tools also need to go with strong community actions to make people feel safe.

“If we just addressed each individual instance of harm, we’re not connecting the dots and seeing some of the bigger issues in our communities,” she said.

Earlier this month, the Emmett Till Anti-lynching Act was passed by the Senate unanimously on March 7, making it punishable by up to 30 years in person. It is still awaiting President Biden’s signature.

Despite the challenges that marginalized communities face throughout the pandemic, there seems to be a lack of channels for them to access resources. A lot of clients Penor has met with are left out from the financial assistance that the state government offered specifically for the pandemic. This is because of the inability to qualify, or they didn’t file their taxes, or their immigration status. She described the government’s resources as piecemeal, where they have a little bit of support here and there.

“It’s like a full-time job trying to access all of those different resources to stay safe, or to get your needs met,” she said.

As the pandemic is getting better, Penor is excited to assist the survivors in person again.

“One of the things I really felt good about last year was working with them in person, being able to look over their various documents and calling their attorney together,” she said. “Having that in person has been really needed.”

API Chaya offers a free and confidential helpline at 206-325-0325 for survivors to get connected to their therapists with a primary focus of safety planning, empowerment and education.