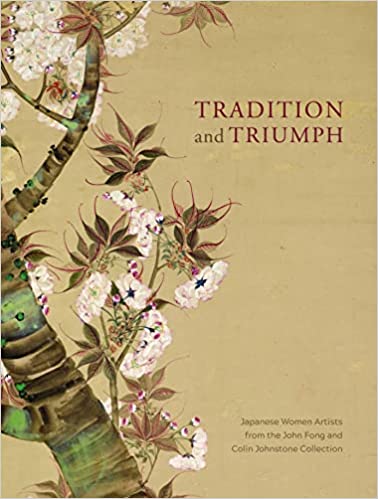 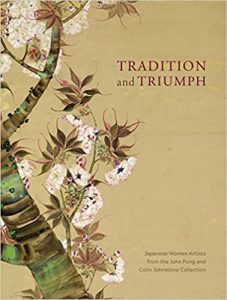 From November 13th, 2022, until May 13th, 2023, the Denver Art Museum will hold the exhibition Her Brush: Japanese Women Artists from the Fong-Johnstone Collection. Many of these works will have never before been on display. In September of 2021, the Denver Art Museum published Tradition and Triumph: Japanese Women Artists from the John Fong and Colin Johnstone Collection by professor of Art History Andrew L. Maske. Tradition and Triumph is a richly illustrated catalogue that details this collection of works by Japanese women from the 1600s to the 1900s.

Tradition and Triumph is prefaced by two essays that give the reader key context: the first by Maske that gives a brief overview of art by Japanese women throughout history, and a second by Dr. Patricia Fister, scholar of Japanese Art History, that is specifically about Japanese Buddhist nuns and their artwork. Both essays provide insight into how these women found and created their own opportunities. For example, the first essay describes how aspiring artists would often be mentored by famous male artists and would marry into families where artistic careers were supported; the second essay explains how women seeking freedom would often become Buddhist nuns because, as nuns, they would be expected to make long pilgrimages and also to create and sell wares to fund their monasteries. (A few of these artists became acclaimed enough to found their own temples and monasteries.) Both essays introduce key ideas such as the Three Perfections (poetry, painting, and calligraphy), originally a Tang Dynasty principle, that had a major influence on Japanese art.

The catalogue entries themselves are sorted into categories. “Haiku Poets, Haiga Painters,” for example, is devoted to poets who used calligraphy and painting to illustrate their poetry. I was particularly delighted and surprised when I realized how deeply poetry factored into this book—haiku, haibun, haiga, and other forms are all featured and often combined throughout the collection. Tradition and Triumph features the art of poets like Ōtagaki Rengetsu, who is considered one of the greatest Japanese poets and who was one of the codifiers of the haiku form. The book is beautifully illustrated with large, clear photographs of all the work—it is almost like seeing them in-person. The poetry is translated and nicely formatted, and the art and writing complement each other very well. For instance, Cat. 72, Signboard, which is an ink painting and poem by Takabatake Shikibu, is reproduced at a large scale; a reader can easily gauge all the brushstrokes utilized by the artist, down to the smallest windblown flower petal she painted, and the texture and color of the paper she used is clearly discernible. The painting is of a signboard, framed by flowing calligraphy and flower petals, and the translation of Takabatake’s poem in the curator’s note reads:

must not be broken off.

So says the signboard.

But with whose permission

does the storm blow over it?

Similarly, one of my favorite works in this catalogue is an incense box (kōgō) by Ōtagaki Rengetsu, which she inscribed with one of her poems. Tradition and Triumph provides helpful art historical context in every entry; for this one specifically, it explains that kōgō are for holding “tiny orbs of rolled incense” to cover the acrid smell of charcoal during the tea ceremony. The incense box is round, flattened, and a ruddy color, and I appreciated its mimetic quality—it illustrates the poem with which it is inscribed looking like a red autumn moon:

In the fields, in the mountains,

right to my bedroom!

Throughout, Tradition and Triumph explores amazing achievements by the artists: there is Noguchi Shōhin, who began her formal painting training at age eight, was already able to support herself and her mother at age sixteen after her father’s passing, and also at sixteen agreed to a challenge to create a thousand paintings in one day. And there is Ōishi Junkyō, originally a geisha, who lost her arms in a brutal attack by her foster father, and who then trained to become a painter (using her mouth), a nun who counseled other people with disabilities, and then founded her own temple. And, of course, there is also the aforementioned Ōtagaki Rengetsu, incredibly accomplished poet and potter, whose ceramics were hugely sought-after luxury items and became their own trope and brand: Rengetsu ware.

Tradition and Triumph also explores the women’s collaborations with and how they learned from their fellow artists, women and men alike. Perhaps this is best illustrated by the beautiful (and adorable) ink painting on silk, Tortoises on New Year’s Morn, a collaboration between ten artists, three of whom were women. The painting shows a hazy red sunrise above mountains in the distance that were painted by the organizer of this collaboration (Araki Kanpo, an art instructor the book explains was “one of the most important advocates for gender equality in the arts in the Meiji period”), and in the foreground are tortoises in different poses, each painted by a different artist. Noguchi Shōhin, one of the artists discussed above, was a collaborator of Araki Kanpo’s, and her work appears in the painting.

The works in this collection feel truly timeless. I could understand exactly why Rengetsu ware was so popular because seeing her work, with its visible fingerprints, made me want to reach into the book and eat off of those ceramics myself. The ink painting, Liulang’s River, by Ema Saikō was painted some time in the mid-1800s, but with its thick, watery brushstrokes, looks like a modern abstract expressionist work.

The exhibit Her Brush: Japanese Women Artists from the Fong-Johnstone Collection is the perfect reason to visit the Denver Museum of Art, and if you can not make it to the show in-person due to COVID-19 or any other reason, picking up Tradition and Triumph: Japanese Women Artists from the John Fong and Colin Johnstone Collection is an excellent alternative. I recommend this book to everyone who loves art, poetry, or both.