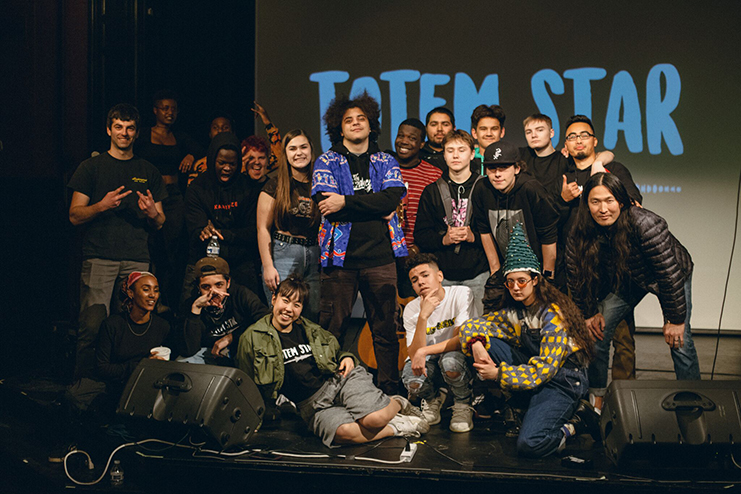 “These are confusing times, but we are still moving forward,” Daniel Pak, executive director of 501(c)3  non-profit Totem Star and Chair of the Youth + Community Committee of the Seattle Commission said.

The non-profit based out of the Youngstown Cultural Arts Center in West Seattle engages with young artists across the greater Seattle area to develop their musical talents. Though they closed their recording studio in early March due to COVID-19, they have continued to offer free online programming that allows youth to continue their engagement in music production, performance, and mentorship from a distance.

“Although it’s tough to be confined in our homes with less physical accessibility and interaction, we always encourage our young artists to keep making art,” Pak said. “To keep writing. To keep telling their story. And if they’re feeling scared or anxious, to be assured that we all are. Writing, singing, rapping, and creating music may just be the best medicine.”

Totem Star’s inception goes back to 2010 when co-founders Pak and Thaddeus Turner were operating a mobile recording studio for youth in the South Seattle area. These youth were recently released from juvenile detention, and were utilizing the recording studio that Pak was providing to tell their stories about their lives that were influenced by gang activity.

By the end of his time working with them, Pak had realized that there was a greater need to offer more consistent programming support, and decided to develop partnerships with organizations such as the Juvenile Rehabilitation Administration, the Office of Arts & Culture, and the Jubilation Foundation. Thus, Totem Star was born into a non-profit that eventually found its home in the West Seattle area.

Lily Indigo and Grae Violett are two youth artists from the Totem Star community that have had to adapt due to the recording studio’s closure in March, but have been able to utilize Totem Star’s online support to continue to develop their musical passion. Their time at Totem Star has given them the opportunity to learn more in depth about the process that goes into creating their own songs from the ground up.

“I booked a slot with her [Totem Star artistic mentor Amy], and first we worked on breath control and vocal technique. Afterwards I played her one of my new songs which she really liked, and she helped me find the harmonies for all of it,” Lily Indigo said.  “She gave me feedback and a lot of good constructive criticism on how to make them better…with the virtual sessions there’s something for everyone.”

For both, music is an important outlet that they utilize for self-expression of creativity. Alongside their musical growth, they have also been able to become part of a bigger community and network of local artists. Totem Star has also maintained strong connections with other young artistic communities’ bases such as The Residency, which offers hip-hop artists artistic and leadership skills.

“I live in Olympia, and so sometimes going to in-person session is hard but with this when  I think of a song or something and one of the artist mentors has time, I can book it that day and not worry about what the commute is going to be like,” Grae Violett said. “I’ve been taking song writing lessons…  fine tuning the lyrics of my songs which has been really interesting because I’ve never been able to do that.”

According to Pak, Totem Star has been able to work with over 2,000 young people since the non-profit’s inception. Throughout the years he has seen the growth in youth interest for Totem Star, which can be accredited to the ways in which the non-profit has conducted their outreach to local high schools to develop strong community partnerships with youth. Pak is motivated by his passion for promoting arts education amongst youth, and is also working towards the long-term goal of getting Totem Star into record label status so they can distribute their artists’ music in mass.

Looking to connect with Totem Star? You can learn more about them at https://totemstar.org/.