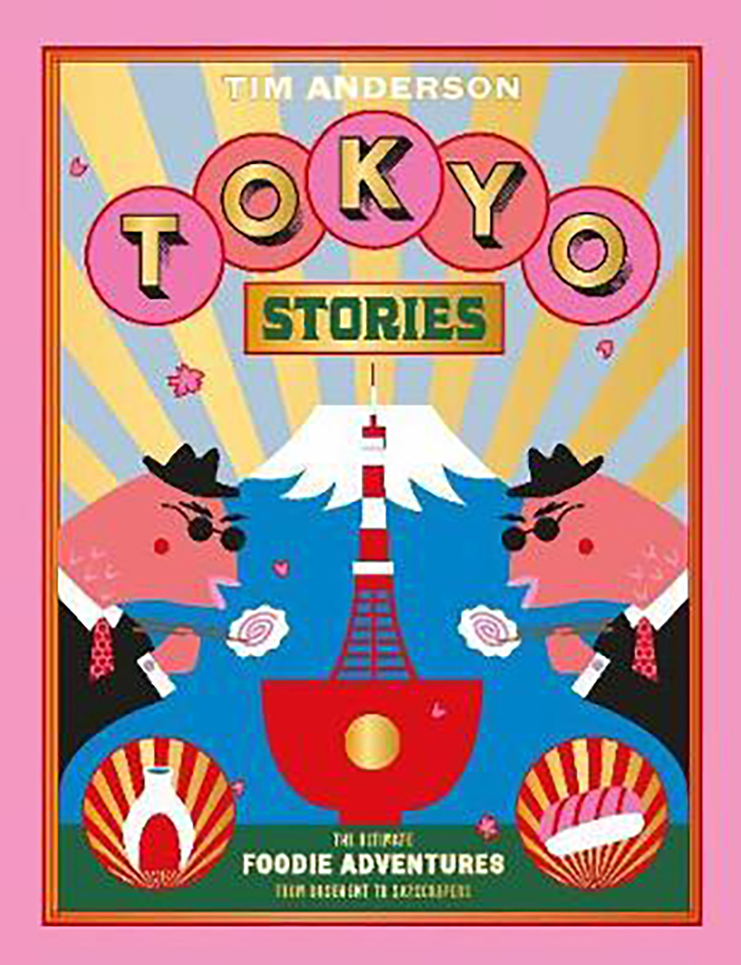 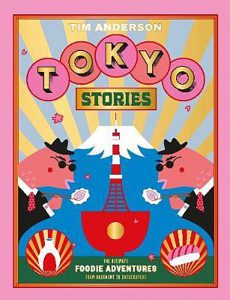 The book cover – at first glance – with its eye-popping colors and kitchy-camp graphics, is a far cry from that of a typical cookbook. Only when your eyes scroll down through the bright blue Fuji, puff-lipped pink fish and candy-striped Tokyo Tower do you discover the words, “A Japanese Cookbook”. Having just returned from Japan it was the Tokyo Stories title that drew my interest. Not the recipes.

Curiosity inflamed, I fast-track opened the 253-page volume and collided with the author’s brief preface: “Fake food, so perfect it looks real; and the real food, so perfect it looks fake. In Tokyo how can anybody ever know what to eat?!” Chortling loudly, recalling my gluttonous foody forays in old Edo town, I was transfixed. We were, I was convinced, kindred spirits. Fraternal twins joined at the plate – chopstick comrades. “Banzai!” I hooted aloud.

So, who is this kitchen confrere, I pondered? Author Tim Anderson is the executive chef and owner of a Japanese soul food restaurant in Brixton, a residential district of south London. Born and raised in Wisconsin, after studying Japanese History and Japanese food culture, he spent two years in Fukuoka. Nanban: Japanese Soul Food (2015) was a book inspired by his restaurant (Nanban) which began as a pop-up starter in 2013 that turned brick-and-mortar two years later.

In 2018, he published JapanEasy. His newest work, Tokyo Stories (2019) is a fun-filled, fast-paced read that nails you with its intimate narrative style. “Start the day on a toilet more sophisticated than your car,” he writes. Tokyo, he exclaims, “is a city so overwhelmingly impressive that it can be hard to cope with. . . . not just because (it) is big – it’s also because Tokyo is bonkers. There’s just no other city so reelingly vertical, so colourful, so fast-paced, so crowded and dense with diverting stimuli at every turn.” He is, as I, a total all-out enthusiast of Japan’s capital. Tokyo is his muse. “Amen!” and “Hallelujah!” I shout, turning the pages in unbridled anticipation.

Then comes the roar of a bellow, “THE FOOD. MY GOD, THE FOOD!” followed by his cleverly calming assurance: “This is a recipe book, of course, but it can also be used as a reference guide for a trip to Tokyo.”  Genius, I murmur forging ahead.

In an unusual, but creative format that works well for this atypical cookbook, Anderson uses the analogy of a building. Each floor or level is a chapter (seven in all), leading the reader on a tour of epicurean Tokyo. Recipes are grouped by the category found on each floor. From the basements of department store markets and food halls, aka Depachika, comes a guide to Japanese ingredients. On the floor above, Tokyo Street presents recipes for the “greatest hits” of subway station kiosks, convenience stores and vending machines. The next floor, Tokyo Local, features specialties of the city. On the following floor, Tokyo National provides Japanese regional cuisine found in the capital’s kitchens. Then comes Tokyo Global offering Nippon spins on foreign foods, followed by At Home in Tokyo which showcases home-cooked comfort food recipes formulated for small kitchens (appropriate to the apartment dweller lifestyles of Tokyo-ites). Finally, at the rooftop rafters of his gastronomic mid-level high-rise, Tokyo Modern dispenses contemporary Japanese fusion dishes along with cocktails and fixings: Umeboshi Martinis, Tomato Cocktails, -25°C Mojitos and Yuzu-Marinated Olives.

If you like picture books, you’ll love Tokyo Stories. Illustrations abound on every-other page, and often more. Whether with photos of the people, city scenes, shops and markets, places of interest or plated food illustrating recipe outcomes, they are an integral part of Anderson’s book. By the time you reach closure, you have a sense of having traveled to Japan’s capital: Shibuya Crossing (the busiest intersection in the world); mini three-stool restaurants (some founded as far back as the 1500 – 1600s!); the welcoming cat Maneki-neko; aging deliverymen on bicycles; Asakusa’s famed Senso-ji temple; the Ginza at night . . . living stages on the super-charged, electri-city wired theatre called Tokyo.

To cover all of the intriguing 80 recipes given would take reams of paper, tons of calories and pounds of weight. But some of my favorites from the floors of Anderson’s chapters are: Tokyo National’s “Hiroshima-style Okonomiyaki Onigiri” with three kinds of filling – Ebi Mayo, Wakame and Toasted Sesame; Tokyo Street’s “Umeboshi and Katsuobushi”. . . as well as “Strawberry Sando” – who can resist a strawberry whip cream sandwich? Because I’m an addict of the Japanese egg custard appetizer, I highlighted At Home in Tokyo’s recipe, “Microwave Chawanmushhi”. From the Tokyo Global floor, I gave rave reviews to two recipes: Mapo Ramen and Totoro Choux Cream. I can’t help it, but Japan’s penchant for kawaii (cute) in any form makes my knees week and my eyes say, “Howdy”. The Totoro Choux Cream bunny puffs are killer!

The author prefaces each of his recipes with interesting bits of information, personal anecdotes and/or special background notes that are great additions to the book. Even if you decide not to try a recipe you’re grateful to be able to read about it; the result often ending with a quiet response of “Oh” or “Ah” or “Hmmm”. Whether it’s because Anderson is a U.S. citizen living abroad, or in recognition of the hopeless inability of Americans to master the metric system, the book provides both U.S. and International measures. Directions are detailed and precise.

For those stumped at markets staring at shelves of jars with labels written only in Japanese, many recipes include a “Where to Find” box with ingredients in both English and Japanese. However, you may need a magnifying lens or high powered binoculars to be able to clearly see the words and characters.

Tokyo Stories: A Japanese Cookbook was and is a delight to read and partner with in the kitchen. The book jacket reads: “Tokyo Stories is essential for Tokyo obsessives and anyone who loves damn good Japanese food (minus the fuss).” I couldn’t have said it any better.