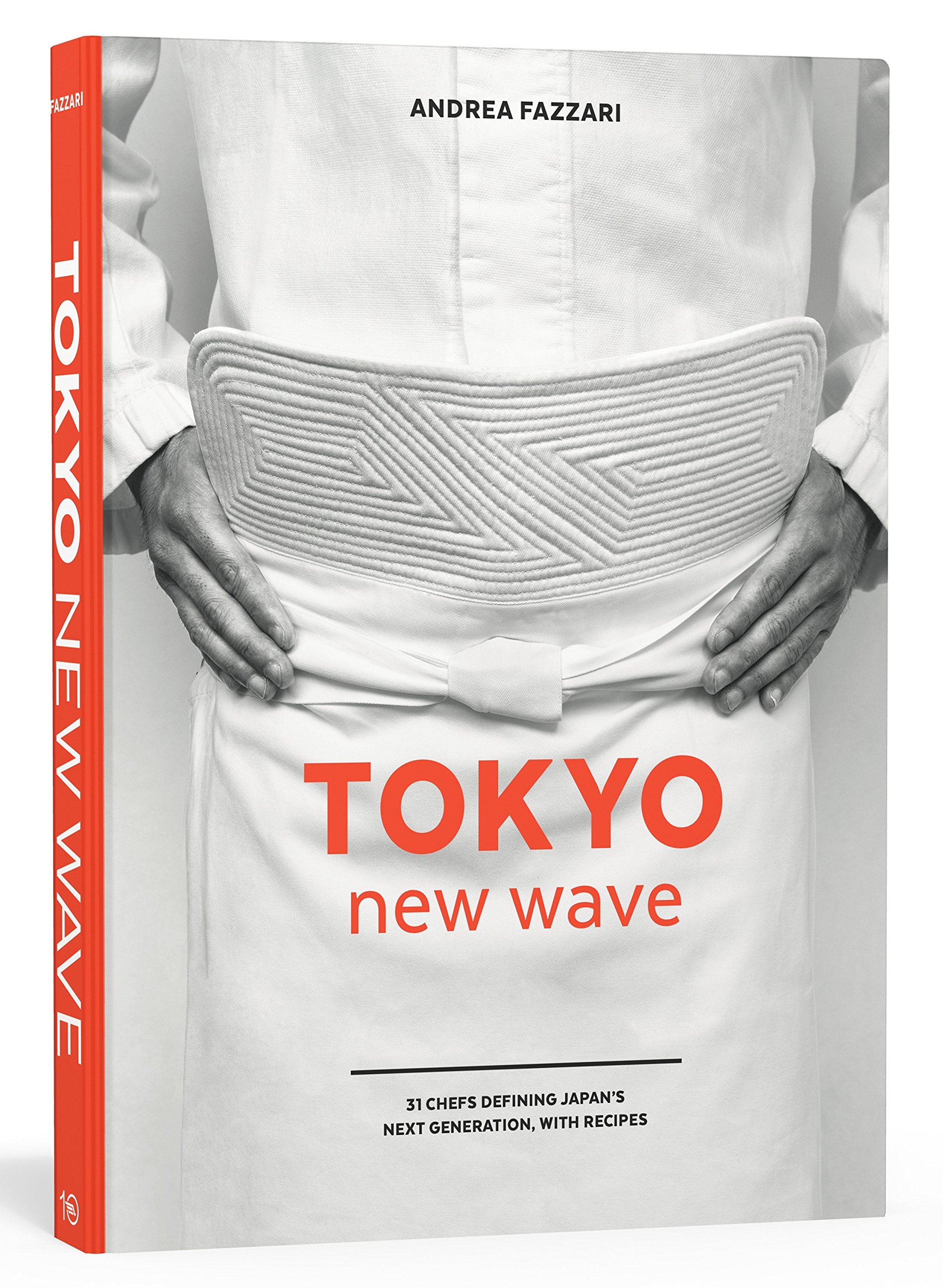 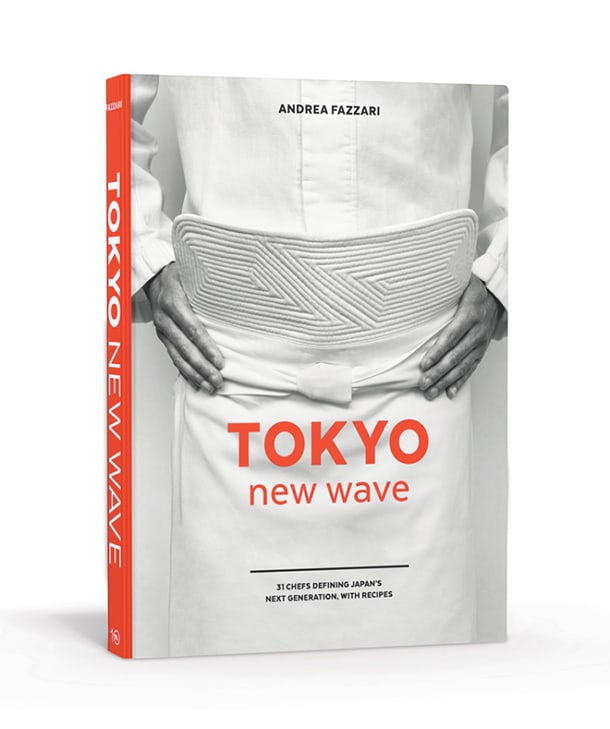 Andrea Fazzari’s book, Tokyo New Wave: 31 Chefs Defining Japan’s Next Generation, with Recipes, is a triple valentine to “a country where craftsmanship, hospitality, and attention to detail are an art form”. The Tokyo -based photographer, writer and author has crafted portraits of thirty men and one woman to spotlight a nouveau nippon gastro-trend in a city awarded more Michelin stars than any other in the world.

With over 160,000 restaurants in Tokyo (compared to 40,000 in Paris, where plats du jour and the prix fix menu are worshipped on the altar of haute cuisine), Fazzari introduces a generation of young chefs (from their mid-20s to mid-40s) as representatives of the city’s top chefs plating fresh alternatives to traditional Japanese fare.

Fusing past, present and future, “this newest generation of established Tokyo chefs are quite different in their attitudes and approach to dining than chefs were just ten year ago,” states the author. They are “much less rigid, more open to the world . . . and other cuisines, using things they learned by traveling.”

Offering up unique creations from nippon starting points that merge world perspectives in their kitchens, these chefs have nudged diners from their Hello Kitty comfort zones, introducing traditional Japanese palates to inventive dining experiences. According to Fazzari, “anyone who is fascinated by food but who has never been to Japan, is simply missing out . . . unaware of a whole universe that embodies the epitome of gastronomy . . .”

With her public relations background in fashion (Armani and Dolce Gabbana) and film (Miramax), Fazaari transformed her specialty into travel and the culinary world through work at Travel + Leisure, Gourmet magazine, and commercial, editorial and book projects that honed her skill in photography, and provided extensive opportunities to work with chefs across the world.

After a visit with her sister, who lived with her family in Tokyo, Fazzari returned to Japan three years ago. The international traveling New Yorker returned to the once small, obscure Edo fishing village (circa 1457) to settle in a city (recast in 1868 as Japan’s eastern capital, Tokyo) populated today with over 13 million people.

Fueled by her interest in cuisine and culture, and the transformation of cooks into chefs, Fazzari frequented the city’s restaurants becoming an insider in its food scene, working and fraternizing regularly with Tokyo’s many influential and respected chefs. Notes the author, “It’s an incredibly intense food city. The techniques, product, tradition and innovation here are exciting and unique. It is an inspirational city for most chefs the world over; they come here for ideas and to learn a level of quality, detail and precision rarely seen in other countries.”

She began posting photos and comments about her experiences using social media. Persuaded by the positive attention received, she submitted a proposal to publishers. The result: Tokyo New Wave.

While some of her selections were based on whether she could work freely with them, the final choice of the 31 chefs was mostly based on her perception of each as a person — “aspects of their personalities (that) were unique, interesting, heart-warming”. From shy, quiet and reserved to exuberant, urbane and free-spirited, the chosen were a diverse kitchen species which, with the book’s intent as a microscopic instrument, Fazzari set out to examine.

Whether from humble beginnings or privileged circumstances, serving their dishes in a three-table establishment or on a 200-year-old Cyprus table or in a full scale modern building designed by renowned architect Kengo Kuma, there are some striking similarities among many of these new wave chefs: genki (spirited, energetic) personalities; early aspirations to be a chef; extended travel and work abroad; apprenticeships in high end restaurants under oyakata (master) chefs; an inherited chef’s lineage from a parent and/or grandparent; a mother who inspired them to cook; respect for the ethics of bushido (the samurai code of honor, loyalty and discipline); use of exceptional and seasonal ingredients; creative license in imagining food: their ingredients, preparation, presentation.

Since 1926 the Michelin Guide has awarded stars (from one to three) to grade and rank restaurants on their quality. Though few establishments manage to receive three stars, in 2017 Japan had 28, the highest number in the world. In that same year, Tokyo garnered the most one or more star restaurants: 314. Paris, a distant second had less than half: 141.

By 2017, eight of the 31 New Wave chefs had been honored with Michelin stars: two had attained three-star status, one two-star status, and five one star each. In 2018, after the book’s release, two other chefs received two-star status, bringing the total number of Michelin star recipients to 10 (nearly one-third of the chefs featured in Fazzari’s work).

Stoked to visit Tokyo and fine dine the night away? At the back of the book is a guide to locate the chefs and their restaurants. Fair warning: fluency in Japanese is required to make reservations at a dozen of the establishments; others require months of advanced reservations; some serve referred guests only.

The 304-page book uses a basic format throughout: background information on the featured chef; a Q & A section; a page or two of photos of the chef, the restaurant, food preparations, staff and family members; and a Chef’s choice recipe accompanied by a full-page color portrait of the completed dish.

There are 435 photos, in both color and black and white. The images attest to the skill of Fazzari’s photographic talents: an acute eye for the aesthetic qualities of her subjects, and an intimate, emotional connection with the pictures she captures on camera.

If a picture is worth a thousand words, then Fazzari is batting two thousand. She created, through text and photos, enticing portraits of unique chefs — bright new movers and shakers — that compel the reader to delve further into discovering private lives behind the drive and energy that has catapulted each into an exalted status among their peers and the public with discerning palates for whom haute cuisine is a mantra.

Tokyo New Wave is not a cookbook, although a number of extraordinary recipes are found between its covers. It’s an insider’s take on chef culture and the gastronomic gourmet world flourishing in Tokyo – a fascinating read for food connoisseurs, and travelers with Japan on their minds and hunger in their bellies.