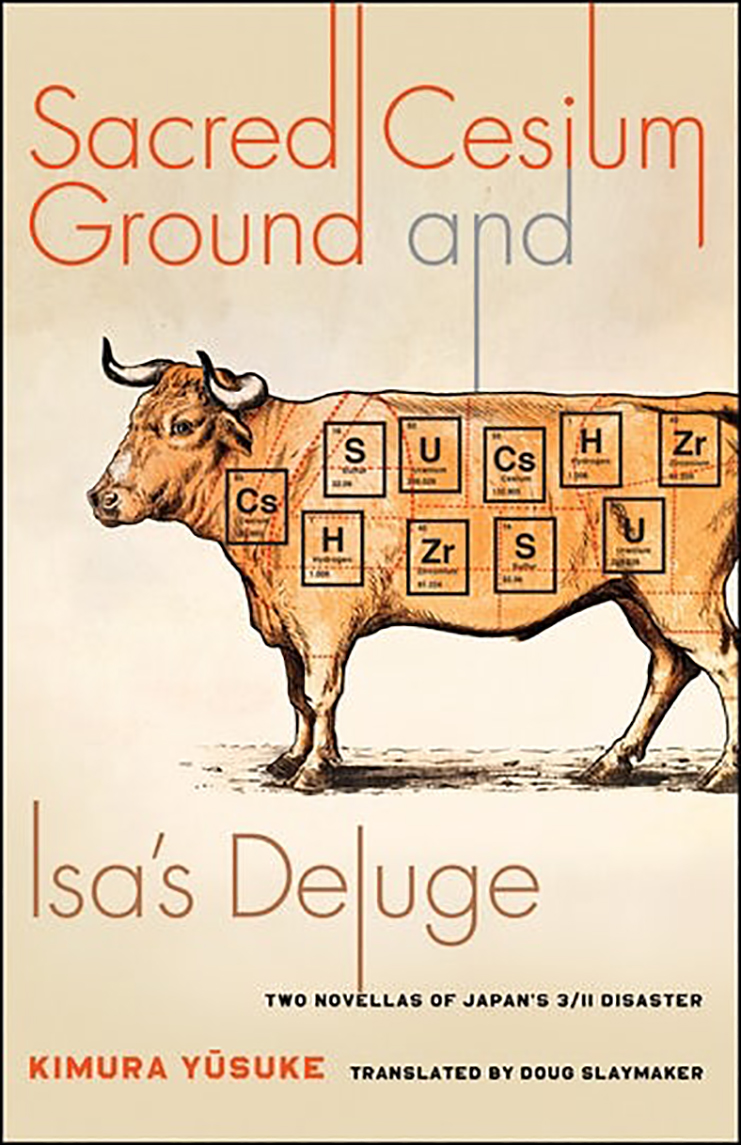 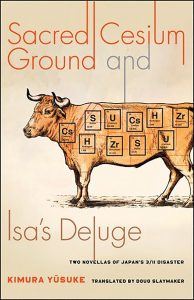 On March 11, 2011, three successive disasters struck Japan: the nine-magnitude earthquake, the tsunami waves that followed, and the meltdown of three reactors at the Fukushima Daiichi Nuclear Power Plant. In his two novellas, Sacred Cesium Ground and Isa’s Deluge, Kimura Yusuke explores the complexity of survivors’ emotions in the aftermath.

Reading translator Doug Slaymaker’s afterword first helps in reading the novellas. Slaymaker’s biographical information contextualizes and makes the point that, “Kimura’s stories here are not about the disasters, but they are motivated by the desire to articulate and present life in their aftermaths.” Both novellas take their time establishing important exposition that may be unknown to some readers.

Sacred Cesium Ground is based on actual places and people. There is a surreal tone despite the presentation of such facts. Slaymaker points out: “Japanese readers will know the real-life corollary of this ranch, the Kibo no Bokujo (Hope Ranch), where Yoshizawa Masami, the charismatic cattle farmer has set up a compound in defiance of government orders.” This novella is the more successful of the two as the plot line follows a woman from Tokyo, who is frustrated with her husband and the lack of workplace opportunities, to help at the Fortress of Hope. As Nishino interacts with the cows, the central farmer, and other volunteers, Kimura illustrates subtle emotions that lead to complicated and contradictory points-of-view. At one point, the protagonist is starstruck when she first meets Mr. Sendo, a “living legend.” Other fleeting emotions include a moment when the farm cat crawls on Nishino’s lap and she remembers what she has learned from another volunteer: “…keep them [the cows] alive. Because they are living.” Another is the simple pleasure of being told one has done a good job.

Structurally, the storyline is linear, the reader following the routine duties that Nishino physically labors through over three days: clearing away the sedimented excrement and manure and filling troughs with crushed soybean to feed the cows. But along the way, other workers offer insights and contradictions. Mikado asks Nishino, “What do you think about this stuff,” then goes on to explain, “It’s [the food] been irradiated… Don’t you wonder what’s going to happen to them? There are calves in here too.” Mikado continues, “Not sure if we are keeping them alive, or just slowly killing them…”

In an important speech, Sendo explains to Nishino: “The fact that our town has disappeared; the fact that a huge number of living beings have starved to death—like everything wiped up, wiped clean, the end…Even if we could transport things out of here, no one will buy it…Those guys will never again be able to raise cattle.” Whenever Nishino turns her Geiger counter on at the farm, it beeps furiously. Even though the farmer and volunteers are doing what they can to keep the cow herd alive, it’s not enough. They lack medicines, face a diminishing food supply, and can’t protect the animals from radiation. Even to Sendo, his stand against the Ministry’s talking about the irradiated cattle as “living debris” is a one-way street: “Once I said I was in, too late to back out. Nothing but to keep going forward.”

While Sacred Cesium Ground is driven by interviews and research, Isa’s Deluge is a more internalized journey of the main character, Shoji, who has returned to his hometown of Hachinohe for a middle-school reunion. Despite living and being educated in Tokyo, Shoji finds little purpose in his job as an editor of a publishing company, which he quits. What does interest Shoji are the tales about his violent, alcoholic uncle—a squid fisherman, a moneylender, and a criminal jailed for destroying the family home and threatening them with a knife.

While visiting his cousin, his uncle, and even his own father, Shoji learns from their oral stories and dialogue. During this time period, Shoji also learns about of a classmate named Sawada who had rescued close to 30 people in danger of being carried away by the tsunami. Sawada later states, “It’s what you have to do.” Though having faded from the main focus of everyday life, the effects of these disasters are always present.

All the while, Shoji drinks and smokes. He shrinks into himself when around other people. It’s only Isa’s stories of teaching his cousin to eat finches or dogs, or of smashing a dead brother’s coffin with a stone that shakes Shoji out of his depression. There’s a passiveness that is ingrained in Shoji and the people of his hometown. Instead of disinheriting Isa, his brothers and sisters never brought charges against him, saying, “Just so sad, just too sad.”

Similar to Sacred Cesium Ground, it’s the introduction to other characters that deepen the reader’s understanding. Shoji’s uncle, Kakujiro. has to explain about survival and recovery: “We all got beat up…Everyone was chased out of their homes. And then the damage from malicious rumors and slanderous news stories…but the thing is, the land and sea really are polluted now…All their damage has fallen on us, and we could be more explicit in arguing our pain and suffering…But being people from Tohoku, it is just something we can’t do.”

This theme of repression is strongest in Shoji’s internalized dreams, where “he had been trying to plug up the cavern by throwing all the episodes related to his uncle in there, that and everything else, up to and including the things related to the recent earthquake and tsunami disasters in his hometown.”

While the disaster theme is topical in these two novellas, Kimura has woven a surprising subtle mosaic of feelings surrounding the abandoned and forgotten.