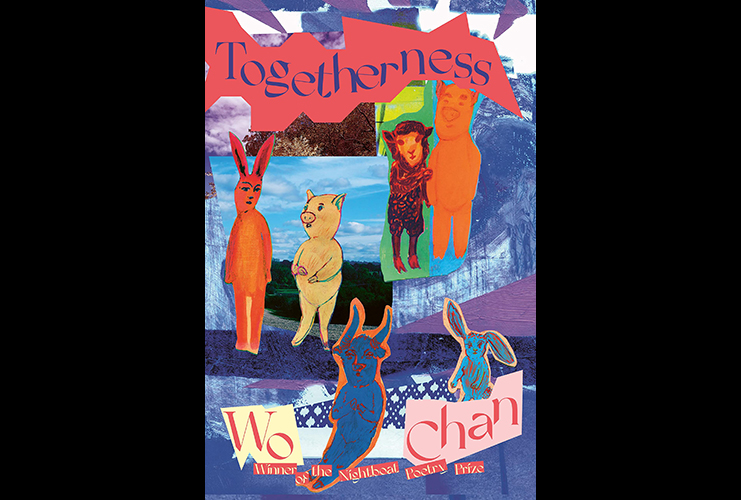 Togetherness, written by non-binary Fujianese drag performer Wo Chan (who performs as The Illustrious Pearl), is a multi-faceted poetry collection with a compelling structure. While it is the norm for works like this one to have clear overarching themes, these types of collections tend to feel as if they are many individual smaller works consolidated into a single book. On the other hand, Togetherness reads like a memoir written in poems. Its autobiographical quality is clear because Wo Chan refuses to withhold or obfuscate details of their life.

Reading the poems sequentially from the beginning causes questions to arise: What are the histories of the family members Chan mentions? What led Wo Chan to leave their family’s restaurant business? How did they discover their gender identity? And what are the typeset letters—in others’ voices—sprinkled throughout the collection, that speak up in defense of the Chan family? These mysteries keep the reader engaged.

A reader will see, as if through Wo Chan’s eyes, the many struggles of making a life in the U.S. The collection delves into both the history and the lives of Chan’s parents and brothers, and Wo Chan’s own struggle of not fitting their family’s mold and trying to find their place in the world.

In addition to exploring these topics, Togetherness also shines a light on how systemic issues such as the trials of immigration and the threat of deportation connect to highly personal issues, such as trying to see oneself in nature. These themes intersect like ripples on the surface of water. An example of this intersection of themes is Chan’s juxtaposition of the grand and the minute in the “@nature” series of poems that unfolds throughout the collection. In “@nature, teach me things,” Chan writes:

why should I glee
at love snatching me
blackwooled & panicked
into its pinksome mouth?
Midflight
I was going somewhere
had an agenda                  Lisa Frank,
holographic
I bought from Kmart          filled with
jokes and grocery lists….

The poems of Togetherness are brimming with imagery that is strong, unique and unexpectedly accurate. In one untitled prose poem, Chan writes, “…you feel yourself standing on ice so crystal thin, it is like touching the wet of an eyeball”. They also pen lines that are excellent to read aloud and listen to, such as, “that make the skein of stars itself a roof”.

Another strength of Togetherness is how it highlights serious topics while never shying away from life’s humors. I laughed out loud multiple times while reading. For instance, in another untitled prose poem, Chan writes about zoning out so intensely in college while writing a paper on “one of the Rossettis” that they decided to get an Adderall prescription.

Then, several poems later, another prose poem begins, “Ahem. She informs you that you have a learning disorder after she rejects your bid for an Adderall prescription.” Funny and ironic moments like this one help Togetherness feel very relatable and accessible.

Wo Chan uses all of their aforementioned skills as a poet to depict particularly vivid settings and points in time. One prose poem that opens with a rather humorous note—“Reading the Yelp reviews of your family’s restaurant—a mistake”—is especially vivid in its multi-faceted portrayal of Chan’s family, containing phrases that are both metaphorical and gut-wrenching, such as, “your mother’s English, taped up with smiles,” followed almost immediately by phrases almost amusing in their bluntness, such as, “…your brother, who remains an asshole in every description.” Chan also shows the creations of their family in precise detail. For example, in a poem filled with gorgeous food imagery, they describe crab puffs in this way: “…rangoons are fried/until smooth to touch, a puffed doneness in the shade of dynastic cash,” the beauty and art that was their family’s work even as other details give the reader a window into the pain and conflict within the Chan family.

Togetherness is a poetry collection I recommend to all who love poetry or memoir—or both. Its narrative thread follows the search for love and acceptance, both from outside and from within, and it offers a refreshing and deeply intimate experience from those not often given a voice.