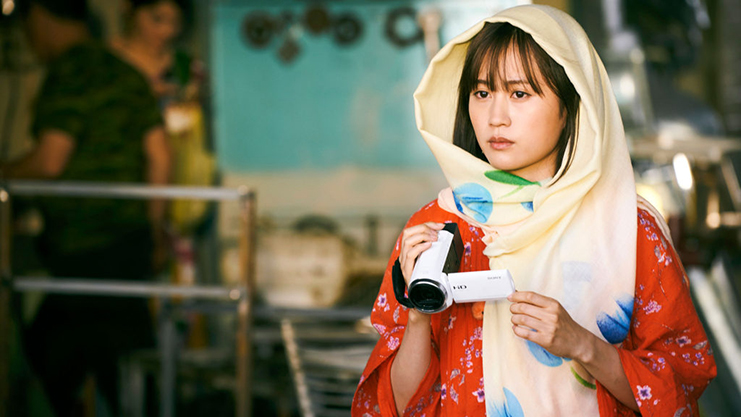 Kiyoshi Kurosawa’s horror movie chops are never very far in this gentle film, To the Ends of the Earth, about Yoko (Atsuku Maeda), a timid on-air talent for a travel show shooting in Uzbekistan. We first meet Yoko applying make-up, while in the background a mother and child speak with their dialogue frustratingly untranslated. She runs outside and looks around in confusion before a burly man flags her down, gesturing to a motorcycle and speaking in a language she doesn’t understand. We watch Yoko wave him off and flee frantically searching for something, or someone. The man persists and she finally agrees to a lift, all the while looking terrified — along with the audience — about the possible outcome of the ride.

At Aydar Lake, Yoko joins the Japanese crew including director Yoshioki (Shota Sometani),  camera operator Iwao (Ryo Kase), and Sasaki (Tokio Emoto), a tender-hearted production assistant. When a local fishing guide fails to help Yoko land the “bramul”, a fabled fish, or any fish for that matter, the director starts grumbling. Sensing the mood, the guide comments on their bad luck, which their Uzbek translator, Temur (Adiz Rajabov) translates, hoping to make Yoko feel better. She replies, “Luck is something I am lacking,” setting the backdrop to the film’s exploration of intention and action in creating opportunities.

The fishing guide blames the poor catch on Yoko, complaining that a “female scent” scares fish. This sets off Yoshioki again, who insists that she remain even as he bemoans the lack of cooperation from the guide. Both in this scene and later in the film, the director explodes at obstacles to the shoot, blaming “inflexible” locals for the failure, and so exemplifying a certain kind of tourist; one that fails to accommodate, without necessarily condoning, cultural differences and with it the demands that travel makes for truly meaningful connections to take place.

Yoko continues to suffer indignities at popular spots such as the Syob Bazaar and, most horrifically, at an amusement park that is anything but. Throughout, she maintains a heroically stoic demeanor appearing game for anything that’s asked of her. The same can’t be said of her willingness, or inability, to connect with others. She avoids her coworkers after work instead desperately texting her firefighter boyfriend in Tokyo in lonely hotel rooms. When locals attempt to talk to her, or extend a hand in friendship, Yoko rebuffs them. Her increasingly paranoid behavior suggests someone stuck in a fearful mindset.

The sense that she simply endures becomes clearer as Yoko effortlessly dons and sheds her chirpy on-screen persona as soon as the camera stops rolling. A chance remark by Iwao, the camera operator, forces her to take a deeper look at her life. To the Ends of the Earth steadily moves away from realism and shifts genres to accommodate an unlikely final scene reminiscent of Maria von Trapp singing “Sound of Music.”

Yoko’s ride to the shoot location in the opening minutes of the film is the first step she takes from fear of the unknown, as Uzbekistan represents for her, to a realization that a life without risks can hollow out a person, leaving her with regrets until she is a tourist in her own life. Atsuku Maeda’s subtle performance as Yoko will stay in your mind long after the credits roll.

To the Ends of the Earth streams at the Grand Illusion Cinema until January 14.