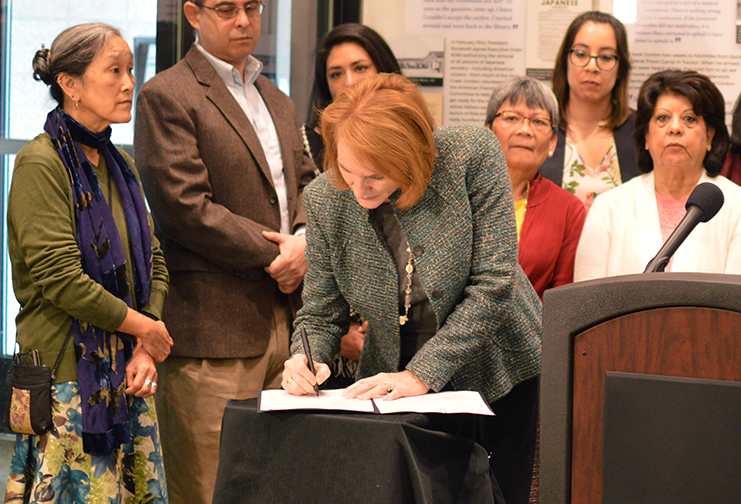 When InterIm Community Development Association (InterIm CDA) filled Hirabayashi Place, it prioritized tenants who lived or worked in zip codes that are most vulnerable to gentrification and displacement. InterIm CDA wants to use the same tool — known as a Community Preference Policy — for Uncle Bob’s Place, a project with 126 units of affordable housing scheduled to open in 2021. The demand for affordable housing is so huge that “it’s always tricky to make sure that we are actually serving the community when we do a project,” said Leslie Morishita, real estate development director for InterIm CDA.

A new executive order from mayor Jenny Durkan might make it easier for developers like InterIm CDA to prioritize tenants who might otherwise be displaced, or to help people who have been priced out of returning to their communities. The executive order directs City departments to address displacement and gentrification using a variety of tools, including encouraging developers who receive City funding to use the Community Preference Policy, if they want to.

“Our region’s skyrocketing costs and and rent have displaced far too many individuals and families,” Durkan said at a press conference on February 20 announcing the executive order. “We want to make sure that those people who would be the first to be pushed out by redevelopment and growth can be first on the list for the housing that the city is investing in.”

The details of the Community Preference Policy are yet to be fleshed out. The City will work with the Office of Civil Rights and the City Attorney’s Office to make sure the policy doesn’t clash with Fair Housing laws. Before the City threw its support behind the policy, InterIm CDA had opened itself up to possible legal challenges when using the policy, Morishita said. Community Preference Policies have been adopted in New York, Portland and San Francisco.

The mayor’s executive order includes several other measures to prevent displacement, including directing the Office of Housing to create more home ownership opportunities on public land. Durkan noted research showing that wealth disparities between white communities and communities of color are often related to home ownership opportunities. The Office of Housing will also provide no-interest loans to low-income homeowners to repair their homes, so they can afford to stay in place.

Another goal of the executive order is to ensure that the Mandatory Housing Affordability (MHA) policy — which requires developers to build some affordable units in their projects or pay into an affordable housing fund — creates 3,600 low income homes for families by 2022. The executive order encourages developers to build more affordable housing on site, rather than paying the in-lieu fee. Originally, the goal of MHA was for a roughly equal amount of projects to build on site versus paying the in-lieu fee. “That is out of whack right now and so we are going to be looking at that carefully,” Durkan said. “Right now we’re seeing the vast majority of that is going to in lieu payments. Long-term, that can have a very negative impact on our city.”

At the press conference Council member Lisa Herbold announced an ordinance aimed at stopping displacement. It would require developers who build in areas at high risk of displacement to replace any low-income housing they destroy in the process of building their projects, or pay into an affordable housing fund.

The executive order also aims to increase protections for tenants facing eviction. Durkan noted this is often a cause of displacement and a triggering event for homelessness.

The City will also support the Equitable Development Initiative, supporting community-driven projects, such as the Filipino Community of Seattle’s low-income housing project for seniors. Durkan’s administration has called for this to become a permanent source of funding. “Those projects reflect what we can do as a city to really put a stake in the ground, to prevent displacement and gentrification and bring people back to this city,” Durkan said.

Under the executive order, the City will also call on the Washington State Legislature to fund more affordable housing, lower property taxes for low-income seniors, and to implement just cause protections for those facing eviction.

The City will also aims to take a more cohesive, inter-departmental approach to anti-displacement efforts. To do this, the City’s Affordability and Livability Sub-cabinet will examine how regulations, tenant protections, funding and other tools can be combined to prevent displacement, and report quarterly to the mayor.

The mayor’s executive order and her ordinance represent a new effort by the city to take displacement more seriously, said Herbold at the press conference. Before 2016, Herbold said, the City didn’t perform displacement risk analysis. “Our approach was that supply in itself would mitigate displacement, and we know that’s not true,” she said.

Now, the City has performed displacement analysis when analyzing impacts of MHA, and with the City’s comprehensive plan. “Now because we have that information, we know where displacement is happening, the city is recognizing we have to pass policies to do something about it,” Herbold said. “Displacement is a very, very challenging issue and we need many, many tools to address it.”

Durkan and Herbold credited community members from the CID and Yesler Terrace for urging the City to consider anti-displacement measures such as the Community Preference Policies after the City considered passing MHA in the CID in 2017.