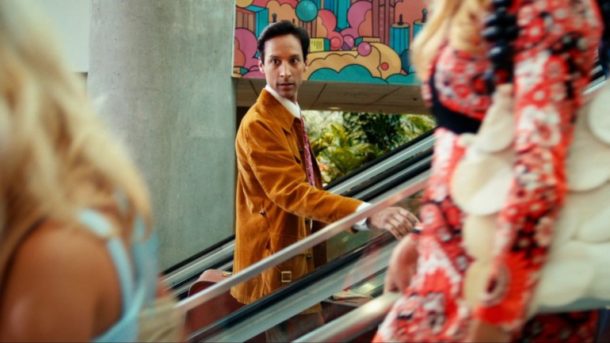 In Tiger Hunter, directed by Lena Khan, young Sami Malik (Danny Pudi) is so in awe of his father, a renowned tiger hunter in their Indian village, that he wonders if he can ever live up to his dad’s reputation. Tragically, when the boy is just 8, his father dies. But Sami has never forgotten the many words of guidance his dad shared with him; specifically, that “to be a great tiger hunter, you must become the tiger.”

As an adult, Sami pursues a masters degree in engineering at “the best British school in India,” then decides that, in order to honor his father’s legacy and win the woman of his dreams, he must move to America to attain “greatness.” It’s the late 1970s, and the United States is hiring, so Sami lands in Chicago con dent he’ll obtain his dream job that will lead to his dream woman, Ruby (Karen David).

Alas, the job Sami is offered is for a draftsman and not an engineer. Further, he’s forced to find an affordable living space and ends up sharing with 13 other, mostly South Asian men also with advanced technical degrees, but who labor as dishwashers and taxi drivers. One of them, Babu (Rizwan Manji), serves as the lm’s comic relief. An automobile aficionado, Babu will end up surprisingly successful because of his scrumptious samosas.

Meanwhile, Sami works on an early prototype for a fully functioning microwave oven. His on-the-job nemesis is Kenneth (Sam Page), the chief engineer and a partner in the rm, who would stoop to anything to discredit Sami—even stealing his ideas.

But Sami makes friends with Alex (John Heder) a mellow, white fellow employee who goes along with Sami’s shenanigans. Either Alex is just plain bored with his predictable, rich lifestyle or he genuinely cares about the only co-worker who seems to take an interest in him. It does help to have influential parents, and Alex’s will be a shocking revelation to Sami.

Spending his days trying to get promoted to an engineering position at his job, Sami takes his work home where he enlists his roommates’ help in creating a microwave
oven that won’t explode. Scrunched together to sleep spoon-style in one bed, the men ruminate their fates, their lack of permanent visas, their inability to get ahead in life to help their families back home, and their uncertain futures. For Sami, not being able to live up to his father’s name is a devastating notion, and even more so when he discovers the woman he loves is coming to Chicago with her strict army general father (Iqbal Theba). Worse, they’re looking at suitors for Ruby. Desperate to impress both father and daughter, Sami plots with Alex and Babu, and comes up with a plan so ludicrous it’s guaranteed to back re.

Setting the lm in 1979 gives director Lena Khan lots of space to play with dramatic visuals. There are vivid psychedelic colors, far-out threads, groovy nostalgic music and an interesting loop back to Indian culture when Sami spots some Hare Krishna devotees chanting at the airport when he first arrives.

In view of the recent executive order banning new immigrants from certain countries from entering the United States, this lm is a timely reminder of the struggles of people leaving their birth homes for a better life. No one intentionally leaves a place where they’re comfortable with the culture, customs and language for an unfamiliar environment just for amusement. In a new country, most immigrants have to start on the bottom rung and, through hard work or good luck or both, can slowly make their way up. Further, second generation immigrants like half-Syrian Steve Jobs of Apple have made an extraordinary impact with their contributions to the U.S. economy.

Like a lot of immigrants, Sami yearns for a better life. But while his goals are to achieve the same greatness that his father’s reputation carries, and to marry his childhood sweetheart Ruby, the bottom line is that being in America allows Sami to invent the first functional microwave oven.