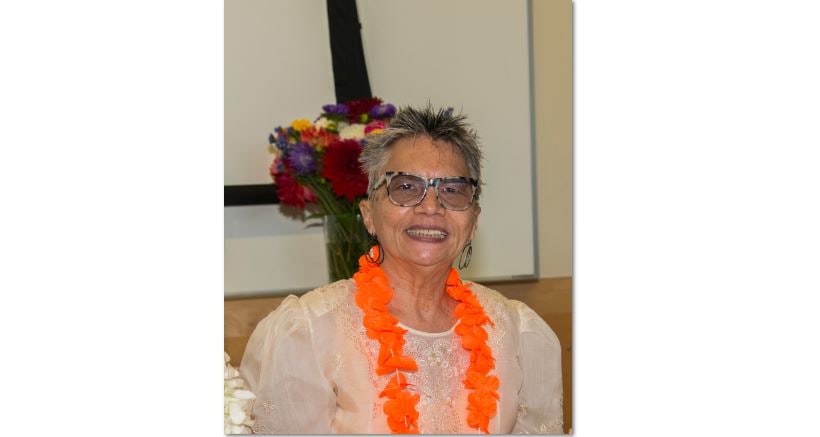 Now in its 23rd year, the International Examiner continues to recognize the outstanding achievements of the Asian Pacific American leaders through the Community Voice Awards.

This year, Ticiang Diangson is being honored with the Posthumous Lifetime Achievement award for her work and leadership in empowering the community of color and raising awareness in environmental justice.

Diangson grew up half-Polish and half-Filipino in Chicago and learned about racism early in life.

Maria Batayola, longtime friend of almost 40 years, said, “I remember when she was talking about how when she was young, other kids would chase her home from school. I think that’s what got her to really push through to not only advocate for herself but others as well.”

Batayola would meet Diangson years after those incidents, a year after Batayola graduated from college. They met at Tacoma Community House where other community volunteers and activists could be found. Diangson was 13 years older than Batayola, but the two hit it off immediately, talking about everything ranging from what it means to be an American and what it means to be women of color. Diangson became Batayola’s confidante and empowering force.

The two were part of the Asian Pacific Womens Caucus group, which advocated for women’s rights and people of color.

Throughout their years of friendship, Diangson would always make an effort to factor in quality face time—not just phone calls or emails. Diangson had her own “special language” according to Batayola. Diangson would say “neener neener” whenever she spotted someone who was not on the ok list. “Applesauce” was used right away when the conversation needed to take a serious turn. And the “cone of silence,” borrowed from the T.V. show Get Smart, was used in instances where confidentiality was needed to protect the people and conversations that needed to happen.

Diangson cared deeply for people around her. Batayola, as a single mother, said Diangson helped her raise her boy.

“She’s a great aunty,” Batayola said. “Kids would come home always with something and I would say, ‘Ticiang, you’re bribing him. You’re spoiling him.’ And she has a lot of other nieces and nephews and godchildren … That was incredible because you have to have a lot of emotional bandwidth to do that.”

Through Diangson, Batayola learned that it’s OK to be friends and love your co-workers. Another person who can speak to this is Michael Davis, who Diangson took under her wing while working for the city. The two first met in 1986.

Diangson introduced Davis to many different circles for Davis to not only meet and know people, but share ideas in discussion. For Davis, who was a shy person and raised to not be aggressive in conversations and was more of a listener, this was important.

Davis said, “She would pause from time to time saying, ‘So Michael, what do you think about this?’ I found that to be really great. People weren’t taking the time to ask if I had any thoughts because things were happening so quickly that you either jumped in to say what you had to say which meant that the loudest and the most boisterous and person that was the most aggressive was the one who sort of held the floor. She was really good at breaking that up not just for me but other people. She did a really good job at making sure there wasn’t just one person talking and creating a sense of dialogue.”

Diangson was also passionate about environmental justice. She founded the Community Coalition for Environmental Justice to address environmental health issues. Through the city, she helped with the curbside recycling program when it first started, and worked on projects making sure the city’s poor, immigrants, and refugees, were served equally and had access to necessary information and services.

Her work led to the creation of the Environmental Justice & Service Equity Division of which she became the first director. Davis, now following in her footsteps is the current director, where he continues her vision for race and social justice in environmental concerns.

Each week the International Examiner will catch up with the 2015 Community Voice awardees leading up to the awards dinner and fundraiser on Thursday, May 21, 2015.