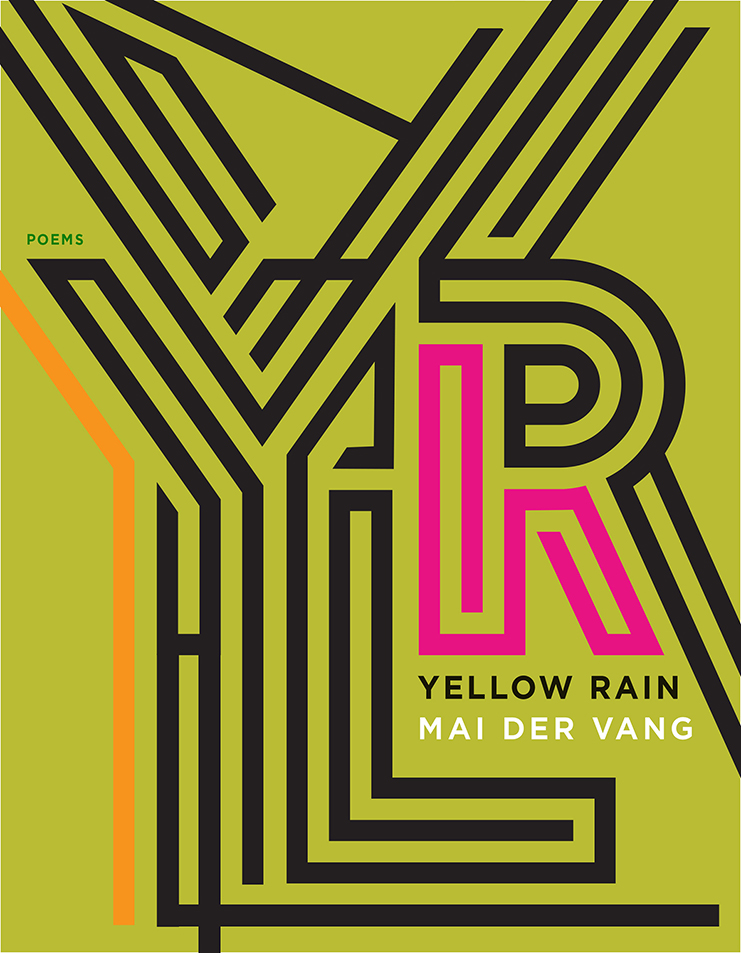 That you have hungered for
Your own clever existence

Though never to have slept
In the elderlight of past bones

The documentary poetics of Hmong American Mai Der Vang are robust and extensive in her new collection Yellow Rain (Graywolf Press, 2021), the follow-up to 2017’s Afterland. In Yellow Rain, Vang commits hundreds of pages to deeply traumatic bombings of Laos during the American War in Vietnam, where countless Hmong were killed, and countless others displaced. The book challenges our understanding of the oppressive treatment of the Hmong and thoroughly explores the legal and governmental bureaucracies which, across decades, abstracted the deaths and perpetuated the nightmares the Hmong experienced.

In the 1970s, many accounts arose among the Hmong of a substance falling from planes, which caused illness and death. The “yellow rain” was purported by the Americans to be honeybee feces, and there were theories by American officials that the bees had been engineered to spread toxic chemicals. One angle to the story was that of mystery, and a shutting down of the Hmong stories through active silencing. Another angle was pushing the blame toward the Soviets. But mostly there was the shutting down of the collective voice of the Hmong. This book provides a counter to that negation. Vang’s words open doors bolted shut and amplify voices muffled. In Yellow Rain, she brings forward the chaos of decades past for a revisiting and a reconfiguring, revitalizing a people that were gravely pushed aside.

“It was never about finding out what actually happened to the Hmong.” (pg. 175)

At the core of the many themes of Yellow Rain is silence and erasure. Vang has found a style to match and flip the historic oppression and use it to form spotlights on weaponized language. Vang utilizes collage and ekphrastic writing styles to pull apart previously censored documents, including communication exchanged between government officials, news documentation, and reports. Many of the poems open with quotes from officials, full statements that set context and tone. Vang then takes related documents, or the language of the statements themselves, to craft her poetry and craft new messages. The work is deeply unnerving, as what would otherwise appear like ceaseless official documents becomes an illumination. And yet the book is filled with difficulty, is heavy with the catharsis amidst the historic arms of abuse, the writhing puzzles of oppression. Proceedings and situations of an era repressed become new faces of horror as the collective readership is invited into these revisitations.

Vang’s own poetry forms the cohesive bond between the reader and the primary source documents. Visceral engagements of the poet dive into the emotional turmoil faced by the Hmong over years and generations. In “They Think Our Killed Ones Cannot Speak to Us,” Vang describes in a surreal sickness the effects and duress of the yellow rain, blended with the sickness of not being heard by dominant powers: “As if attempts / to render us pale   Ripped / lungless from woke into / wild ash   As if ashes / cannot blink howl testify / with the pulse of their own / tatters” (pg. 13).

Perplexingly, Yellow Rain starts with a concept that is already abstract: yellow rain, the substance, was never fully understood as a weapon and a phenomenon. Vang’s poetry explores this abstraction as it moves from a weapon to a people. The Hmong and their claims become just as abstract as the substance itself. Vang explores this abstraction through the powerful irony within the symbol of yellow rain—a force that represents learning and is, in its color, blindingly present. Vang captures this as pure horror: “I think of them not only battling an enemy but also battling their own bodies. Then the unknowable. The truth buried in the jungles. How do you elude the shape of something you cannot name?” writes Vang (pg. 17). Yellow Rain is as much a calling forth of the Hmong’s original experiences of suffering from the substance itself as it is a book about their denial. It is a difficult book, one that asks the reader not only to revisit, but to listen, to find some connection, to establish some empathy toward the Hmong in those initial, utterly difficult situations.

Yellow Rain is an enormous book and an enormous achievement. A 2022 finalist for the Pulitzer Prize for Poetry, the book has received significant attention across many circles, and yet this is a book that feels well beyond momentous; Vang’s collection is a powerful reference into the plight of the Hmong people in Laos, and a fascinating case study into the breaking apart and healing through documentary poetics and poetic collage. There is no doubt that Vang’s work will serve as a resounding starting space for many investigations into oppression to come.