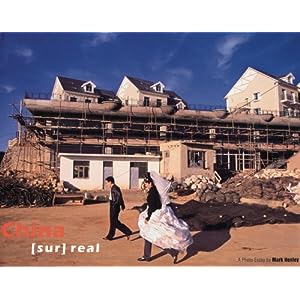 Even after the Olympics in Beijing, China continues to transform itself at a startling pace, driven by the opening of its economic market to modernize. This trio of books document a turning point in China’s history. They also show just how differently artists can approach the same subject and their ability to evoke such varied reactions for viewers.

“China [sur]real” is an apt title for Mark Henley’s collection of images, which were taken over a period of 15 years. He shows the disappearing lines between our notions of East and West and, as United Press International Beijing Bureau Chief Ed Lanfranco writes in the book’s introduction, these photographs “serve to remind us that despite all the things humanity shares in common, the frames of reference which define meaning in our lives vary; it’s the same planet, but different worlds.”

Many of Henley’s photos are comical in their surrealism. In one, he shoots through a KFC window and the ghostly outline of Colonel Sanders is ringed by a group of women in blue uniforms running around a track outside. In another, a uniformed guard stands at attention in front of a lifesize wall mural of basketball star Yao Ming, who looks like he is dribbling around him, driving towards an invisible basket.

Others show the stark contrast between old and new that Chinese people are living in. One image shows a farmer walking along a row in a field of greens, a bamboo pole with watering cans at both ends, balancing across his shoulders. In the background are scaffoldings, outlining the growing stalks of concrete, steel and glass of a city on the rise.

Reineke Otten’s “China Daily Life” shows a similar juxtaposition of old and new, like curved terracotta rooftops overshadowed by tall glass towers. Her presentation is intellectually interesting in that she tries to convey the consumerism of China’s modern age by presenting her images as a catalog. Calling her approach “streetology,” she organizes the images in an obsessive scientific way. Each spread is titled as a category. Under architecture, there are “Chinese Traditional,” “Deserted Area,” “Eurostyle,” “Façade Grayscale,” “Façade Ocean,” etc. On the left page is a large image and opposite are thumbnails of other similar images. They form a catalog of different elements that make up today’s China.

While the concept fits her approach and makes a strong statement, I found the book boring to look at. I could not discern enough detail in individual photos to draw me in. Again, this is part of the point, but still. I wonder how different an effect the collection would have if it were presented as an exhibit collection with larger photos. I suspect that it would achieve a sense of overwhelming bombardment. In book form, it just is not very engaging – just a catalog to flip through quickly and set aside.

The most evocative of the three is “Beijing, Theatre of the People” by Ambroise Tézenas. He depicts Beijing as a stage in the midst of changing sets. Traditional collective houses that line the ancient city’s hutongs are being cleared away to make room for the next act, which requires wide boulevard grids and glass highrises.

Few of Tézanas’ images include people. In those that do, they seem incidental. In an interview with Magnum Photographer Patrick Zachmann, he says he does this on purpose. People are collateral damage in the nation’s drive towards modernity and becoming an economic superpower. Millions of people have been displaced during China’s makeover, but “progress” marches on.

One can sense Tezanas’ sympathy for the people caught in the whirling winds of change. His most beautiful, cinematic photographs are those taken during the night, when the dark, quiet alleys look like they are in perpetual dusk because of the non-stop construction lights. Old bicycles rest against crumbling walls and a single bulb from the inside of one of the homes shines dimly through a faded curtain. Dark bricks strewn the foreground of a half-demolished building and in the only part still standing, a group plays cards around a table, one man buries his head in both hands.