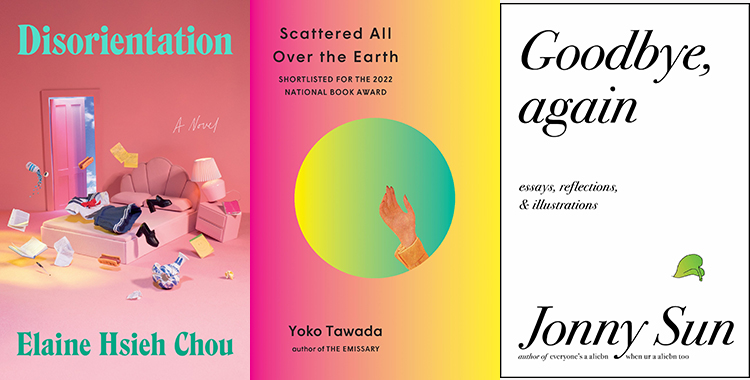 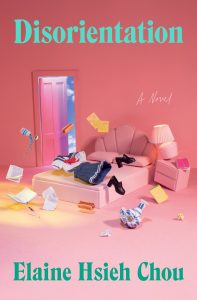 Disorientation is a perfectly chosen name for this equal-parts fascinating and frustrating debut novel from Elaine Hsieh Chou. It’s inspired by the author’s own very disorienting experience of stumbling across a white American poet who had published work under an Asian pseudonym — using the author’s own family name. An event of eerily similar appropriation upends the life of Chou’s protagonist Ingrid Yang, a Taiwanese-American PhD student struggling tooth and nail with her dissertation.

But as a narrator, poor Ingrid has little insight to offer on this potentially resonant topic. She’s too busy unlearning a lifetime of internalized racism and what it’s pushed her into: both an academic field and an engagement. At the beginning of the book, she can’t even bring herself to utter the word “white” to describe the two men who have, incidentally, steered her down these two paths. Chou writes Ingrid’s ignorance comedically, and very intentionally, but to me the laughs are often painful. In fact, she democratically makes fun of everyone, the jokes just as acidic for the flagrantly racist academic administration Ingrid must navigate as for the campus POC Caucus who enthusiastically protest them.

This book asks some difficult and fascinating questions about race, identity, and academia too. But it does so in a way that I found frustrating, with its core ideas so satirized that they feel swept aside by the humor. Many of her characters are interestingly complicated, but her villains devolve into cartoon racists. Ingrid’s journey of self-discovery comes to a bittersweet end that leaves me wondering what I’ve learned — let alone what the experience might be of a casual reader without context to understand who Chou is standing with and who she is laughing at. At least, for the confused or skeptical, Chou leaves an appropriately academic notes section that provides sobering context for the most shocking examples of appropriation and racism she references. That’s up for no dispute. But to me this novel still feels like a comedic fiction stranger than truth.

Scattered All Over the Earth, by Yoko Tawada 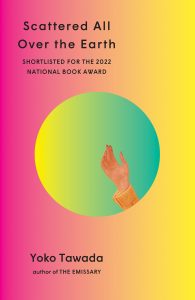 Scattered All Over the Earth is a short novel not to be judged for its size. Yoko Tawada’s straightforward writing sinks into a story with a layered fabric of themes: language and identity, attraction and alienation, belonging and wanderlust… all are woven in. And all concern a Japanese-born woman living quietly in Scandinavia. She has been developing a method of communicating, a language she calls Pan-Ska, that can be understood by speakers of several Northern European languages. But her charmingly niche reflections on linguistics gain urgency when it becomes clear that something is different about this fictional reality — in fact, its protagonist is a refugee in a world where her home country no longer exists. It’s never certain whether this is because Japan has been physically destroyed in some all-too-possible nuclear or climate disaster, or has simply disappeared from human consciousness in a more magical and sinister way. A team of earnest friends come together to help her search for more Japanese refugees, but obstacles always arise before she can have a conversation in her mother tongue.

Tawada builds from many points of view and moves fluidly between characters who express themselves in Danish, English, German, and Japanese, for a resulting work that must have been a puzzle to translate. Indeed, the resulting insights on language and cultural meaning leave me with the pleasant feeling that new neurons are connecting in my brain. She leaves some major ambiguities for her readers, but I feel content closing the book to ponder them. 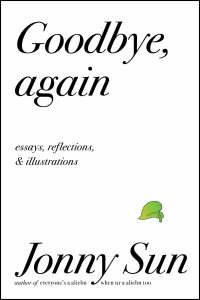 Author and illustrator Jonny Sun offers a glimpse inside his observant, high-performing, anxiously creative brain in Goodbye, again. Told in short bursts of bittersweet anecdotes, unique lists, and occasional one-sentence philosophy, the collection could be plunged into at random like a book of poetry, but it does have a good rhythm to it when read start to finish. Many of the best passages are enhanced by his lovingly-detailed drawings, each of which convey 1,000 of their own words, of course.

Depending on my mood when I picked up a fragment, I could be frustrated or charmed by Sun’s refrains, especially on his arduous relationship to work and productivity. For those who also carry certain acute anxieties about those subjects, his ruminations will probably ring clear. For those kept awake at night by other flavors of neurosis, reading in such intimacy about one man’s demons might be its own form of labor. But many of his essays are a delightful contrast to the shiny, oversaturated world that surrounds us – and I could read about his affection for plants and metaphorical insights about their growth all day.