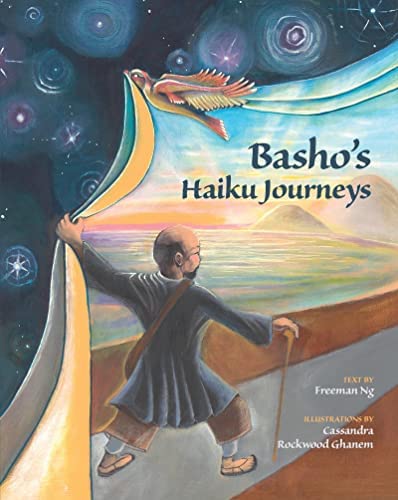 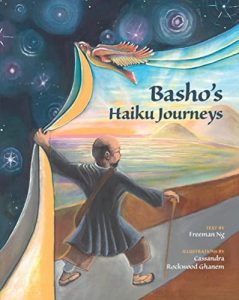 One of the great pleasures of reading to young children is to watch them as they spark an interest in language and make links to their own creativity and imagination. I’ve read children’s books that emphasize word play and stories with a message. Other books teach kids the names of ideas and how they work. It’s been a pleasure to review three books that focus on introducing haiku to young readers—their focus on the poetic form, its history, and methods for inspiring them to write.

Basho’s Haiku Journeys is a forty-page book aimed at young readers who are seven to ten years of age. This picture book features bright, colorful illustrations that give a sense of seventeenth century Japan. The landscape illustrations are especially full of sweeping brushstrokes that echo the circular rolling of clouds as well as long vertical lines that reinforce sunlight through tree trunks. An attentive child who asks questions and an adult reader who fills in connections can be helpful because of the sparseness of information.

Two important pages bookend the material. The first page gives a lot of information with no pictures in four longish sentences that explain “After a fire burned down his hut, he [Basho] decided to adopt a wayfaring, or traveling, life.” The bulk of the book is the imagery of Cassandra Rockwood Ghanem coordinated with Freeman Ng’s haiku, which explains and is based upon the writings of Basho. One lovely picture showing Basho walking amongst whirls of leaves, his scrolls in a shoulder pouch and one hand on his walking stick, is paired with “the oddest feeling/swirled around him like the wind./Was it happiness?”

Five journeys are briefly covered. My favorite was an illustration of the night, clouds, and hints of a hidden moon with “More beautiful still/was the moon that was not there,/glowing in the mind.” While this was a fine image, it might need more discussion and guidance with an adult.

On the last page are instructions on the haiku format, the five-seven-five syllable formula.

Overall, the briefness of haiku let my imagination explore. On the other hand, these bite-sized bits of information could have used a few more specifics of these five journeys other than “With him on the quest, a monk and samurai, two unlikely friends.” This can be a strength as it whets the reader’s appetite and acts as an introduction. Still, the subtle meanings and messages may prove something of a challenge to an impatient audience. 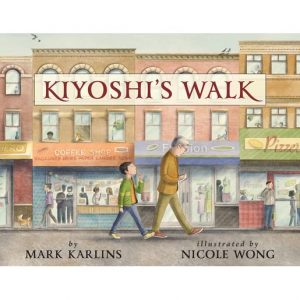 Kiyoshi’s Walk is a more complete narrative that delicately blends characters, lessons, and action. Aimed at children aged five to eight years, the first line reads: “Kiyoshi watched his grandfather, the wise poet Eto, write a poem with brush and ink.” What I welcomed was the simple but close grandfather-grandson relationship and that the elder was a mentor, “a wise poet.” Small details in the illustrations like the fact that Eto is writing Japanese characters inform and add another layer to the modeling in answering the question “Where do poems come from?”

Children should be able to relate to Kiyoshi’s reactions. Kiyoshi’s grandfather suggests a walk, and tucks pen and paper into a pocket, taking his grandson’s hand. Throughout the story, Eto stops and writes, creating poetry in the moment as when Kiyoshi notices oranges at an open market. Illustrator Nicole Wong playfully inserts other visual small stories such as a cat with its paw on an orange. The pictures are never of just one static thing, but of a vast skyline with a boat at night drifting down a river or an aerial view of pigeons looking down at the cars, people, and storefronts. My favorite moments are when Kiyoshi realizes “Yes, poems come from your imagination” and “Our feelings also make poems” that come from the world and from the heart. At the end of the book, the grandfather says “and they come from the way the two come together.” This is a delightful way of explaining juxtaposition, of going beyond a superficial surface reading and arriving at an “unexpected image, a surprise.”

In his author’s note, Mark Karlins references Bashō and gives instruction to the haiku form but goes further than Basho’s Haiku Journeys with less restricting and more inspirational clarifications—“In the original Japanese, it’s not syllables that matter, but sounds.” In Kiyoshi’s Walk, I can see an adult and child reader arriving at a more satisfying understanding of haiku. 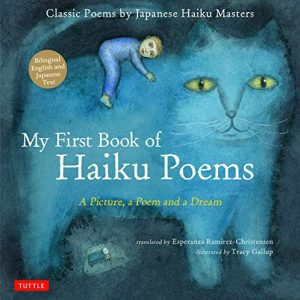 A third way of introducing children to haiku is explored in My First Book of Haiku Poems where each of the twenty haiku are paired not only with an inspired illustration, but an English version followed by the kanji (in Japanese script), and Romanji (the romanization of the Japanese written language). By providing these original forms, an adult or child reader can examine the emphasis on sound and how each translation is unique. This book is recommended for children between five and nine years.

Esperanza Ramirez-Christensen has translated haiku masters Matsuo Bashō, Yosa Buson, Kikkawa Gomei, Kobayashi Issa, Uejima Onitsura, Ōshima Ryōta, Masaoka Shiki, Yamaguchi Seishi, and Itō Shōu. At the end of each poem are insightful questions that provide some context (“In some countries, like Japan, it’s believed that the first dream of the New Year is important because it tells you what the year holds for you.”) or insight (“Sometimes the things we see remind us of other things”) that can lead to an inventive discussion. Tracy Gallup has depicted dream-like images to trigger observation and empathy where a child is present in almost every picture. My personal favorite was a boy lying on the back of a huge ghost-like white cat, leaving behind the small square of his bed.

At the end, when the reader (adult or child) is asked to write their own haiku, there is much to draw upon. This book in particular made me want to return to it again and again.

All three books are fine introductions. All three purchased together would make would be a sound investment into understanding how words matter.