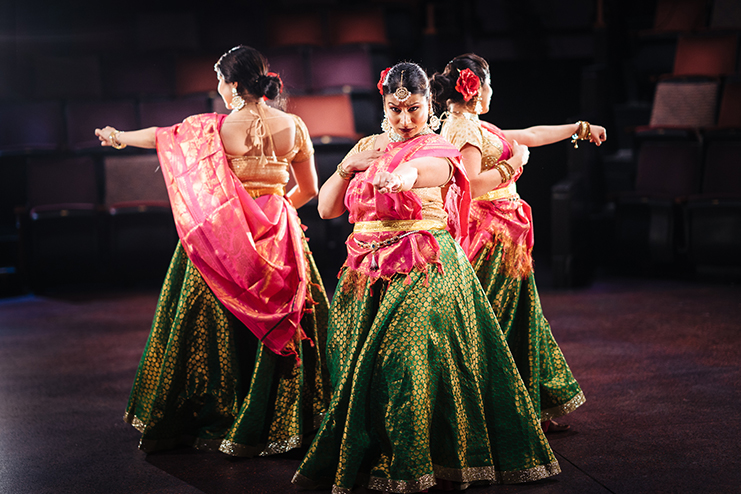 Devi is a classic story of the underdog coming from behind, to rise to great success and power.

The main character is a woman named Prafulya who grows up poor in India, but avails herself of the rare opportunity to rise to power and be seen as a goddess (Devi) and holder of the land (Chaudhurani), despite the patriarchal structural obstacles of her society.

Based on an 1884 book by Bankim Chandra Chatterjee, this theatrical production of Devi has been an extensively collaborative project. Adapted and directed by local director Moumita Bhattacharya, and co-presented by local presenting organizations Pratidhwani and ACT, Devi includes dance, music, a cast of 60 performers, and a supporting crew of 25.

Actor Tanvee Kale, who plays Prafulya, agrees that her character’s story is powerful. “Throughout her life, she has always drawn the short straw,” Kale said. “A couple of chance encounters help guide her path to the point where she can decide which destiny to choose. What I find most interesting about her is her spunk. Whether it is when she is a nobody and is struggling for sustenance, or whether she is commander of a population, you see her.”

For both women, the story of Prafulya is not new. “I grew up reading Devi Chaudhurani,” Bhattacharya said. “A woman in 1800’s India, stepping outside of the taboos and going up against the colonial regime seems fablistic. And yet, Devi is etched in realism. She is human. She has normal human fears and needs.”

Likewise, Kale brings a familiarity to the role. “The character is set in India, where I grew up, and the story is set during a pivotal time in India’s history, something I grew up reading and studying,” she said. “It’s been fun putting my experiences and understanding of the times into developing my version of Prafulya and how she becomes devi.”

But Prafulya is not just an average woman in Indian history. “Devi is a story of survival,” Bhattacharya said. “And that is what makes Devi believable and relatable, which is why I really wanted to tell the story again.”

Pratidhwani and ACTLab have both given strong support to Bhattacharya’s impulse, which has made the job of the show’s producer, Amrita Bhandari, much easier. “This is our 5th ACTLab collaboration,” she said. “With ACTLab, ACT has done a great job of hiring the right talent who are empathetic and appreciative of the needs and challenges of small partner organizations and are truly invested in finding the best way to work with them.” 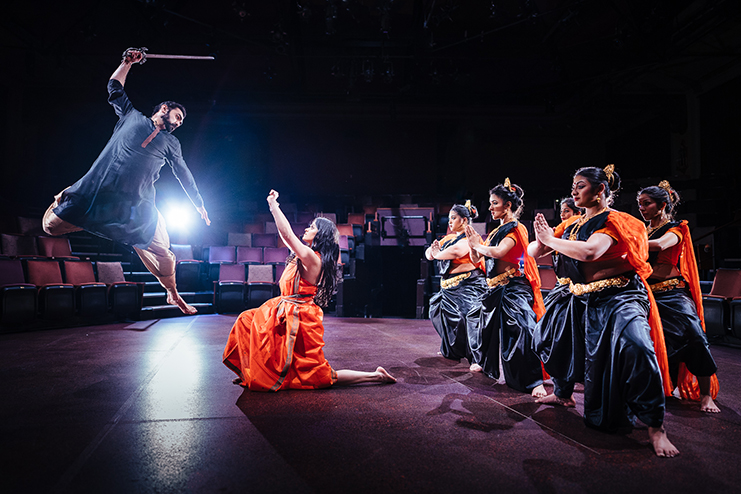 For its part, Pratidhwani has worked to bring a good team to partner with ACT.

“Pratidhwani is a non-profit arts organization,” Bhandari said. “The uniqueness of our team is that we are all volunteers. Our cast and crew members are avid art enthusiasts, many of them have day jobs, and they practice for the show in the evenings, carving out time away from their families to follow their passion for theater.”

Bhattacharya lauds the whole team. “The ownership and focus on deliverables that this team has shown, despite have families and little kids and full-time day jobs, is the stuff of legends,” she said. “Pratidhwani and I are extremely privileged to have found this dream team.”

But Bhandari admits that a production this size is no easy task. “Outside of the rehearsals and practices by the actors and dancers, there’s an additional large set of work streams to keep the production smooth sailing we need help with many non-glamorous tasks like props and sets building, hair and makeup support, rehearsal photography and sometimes even costume deliveries from India,” she said. “These chores need to get done.”

Pratidhwani has welcomed the larger community to help. “In order to encourage the team to help out with these tasks, this year we have incentivized participation by handing out complimentary tickets as a small token of our appreciation,” Bhandari said. “It is heartwarming to see that a group of 70-plus members jump in to ensure our Devi family can put up an amazing show.”

At the heart of this show, for Bhattacharya, is the exploration of how a woman comes to claim her power. “I have always wondered if the author, despite having created one of the strongest female characters in Indian literature, gave in at the end and took away from Devi the power of choice,” Bhattacharya said. “He makes her conform without saying why.”

Bhattacharya wanted to change that. “I have given her the ability to choose and to be her own self,” she said. “Choice is important. And the power of choice makes a human more real, it brings out nuances that otherwise will remain hidden.”

These choices have proven critical for Kale, as well, in her character work for Prafulya. “She lived in a time that I, as a woman of today, cannot empathize and/or understand and agree with,” Kale said. “However, what I needed to do was to leave the judgment aside and be sympathetic to her and her circumstances. I couldn’t get into the skin of Prafulya and play her convincingly until I made the solemn promise of not judging her continuously!”

Bhattacharya reminds us that, even in 2019, there is still a long way to go. “Devi, published in 1884, was a call to re-energize and activate a nation struggling under colonial rule,” she said. “A hundred and fifty years later the world has progressed beyond imagination, and yet, we remain behind in many ways. Abuse remains rampant. Women have progressed, and not!”

So Bhattacharya and the artistic team share the dreams originally held by author Chatterjee in the original book. “It says yes, obstacles can be overcome, irrespective of times, gender, socio-political trappings, and economic boundaries,” Bhattacharya said. “When a woman sets her sights on an elevated goal, the world is her playground.”